I've been on a reading jag lately and have been digging into some great books.  Admittedly, I set aside the 928 page "City on Fire" from this year's Book Expo nearly 600 pages in.  But in its place I've discovered other wonderful (not to mention more manageable) reads, two of which explore marriages between dissimilar people. 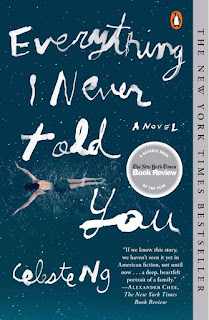 "Everything I Never Told You" by Celeste Ng is a gem of a debut novel.  The book starts with the ominous words, "Lydia is dead.  But they don't know this yet."  The reader soon learns that Lydia was the favorite child of Marilyn and James Lee, an inter-racial couple who married at a time when the laws of many states forbid the union between a white woman and a Chinese man.  But the primary difference between Lydia's parents isn't their race, but their ambitions.  As Ng tells us, "How had it begun?  Like everything: with mothers and fathers. ...  Because more than anything, [Lydia's] mother had wanted to stand out; because more than anything, her father had wanted to blend in.  Because those things had been impossible."

Lydia's parents see the potential in their daughter for their own dreams to take flight.  Marilyn's goal was to become a doctor, and she was on her way when she met James and became pregnant.  (Her mother, a home economics teacher, had been thrilled when she was accepted at Harvard because of the marriage prospects there. James, however, wasn't exactly what she had in mind.)  And so each year at Christmas, Lydia receives books from her mother with titles like "Women Pioneers in Science" and "Basic Physiology."  James, on the other hand, just wants his daughter to be popular.  His gifts are the ever-popular "How to Win Friends and Influence People" or a dress to wear to the prom despite the fact that she doesn't have a date.

Lydia understands her role while feeling overwhelmed by her parents' attention.  Her siblings understand their supporting roles as well, with brother Nath in particular serving as Lydia's confidante.  "All their lives Nath had understood, better than anyone, the lexicon of their family...that a book or a dress meant more than something to read or something to wear; that attention came with expectations that--like snow--drifted and settled and crushed you with their weight."

Celeste Ng's writing is gorgeous as she seamlessly takes the reader between the past and the present.  "Everything I Never Told You" is a heartbreaking, beautiful look into the dynamics of parents and children trying to balance their individual needs and desires with those of their family.  I am eager to see what Ng brings us next. 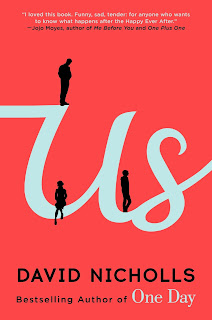 "Us" by David Nicholls is a laugh out loud book about an unlikely marriage between a scientist and an artist.  Like "Everything I Never Told You," the book starts out on a less than happy note (albeit a more mundane one).  Connie is prone to waking Douglas up in the night with fears of burglars.  When she shakes him awake one night he moves on autopilot through the house and returns to bed to assure her that all is safe. "I didn't say anything about burglars," Connie tells him. "I said I think our marriage has run its course.  Douglas, I think I want to leave you."  "Well, at least it's not burglars," he responds.

First, some background on the couple.  Douglas Petersen, our narrator, is a 54 year old biochemist.  Douglas tells us that the "e" in Petersen might lead you to believe that he has Scandinavian heritage.  But this is just a red herring. "Scandinavians are a fair, handsome, hearty and uninhibited people and I am none of those things.  I am English."   Connie, on the other hand, works in a gallery and has never lost her sense of herself as an artist. She is free-spirited and game for anything.  For 25 years, their personalities have balanced each other out in a way that has worked.

Their son Albie--a photographer--is graduating from high school, and Douglas and Connie have planned a Grand Tour of Europe to launch him into adulthood.  At the Louvre in Paris, Douglas feels like the odd man out. "I've always felt a little at a loss with art...In portraiture I look for people that I recognize  -- 'Look, it's Uncle Tony' -- or for the faces of film stars.  The Madame Tussaud's school of art appreciation....In abstract art I look for colour -- 'I love the blue' -- as if the works of Rothko and Mondrian were little more than immense paint charts.....Of course I can see beauty. In my work, I see it all the time: the symmetrical cleavage of a fertilized frog egg, the stained stem cells of a zebrafish embryo...the same pleasing proportion and symmetry in paintings....But in a gallery I always have the feeling that the security guards are waiting to bundle me out the door."

Douglas turns the trip into a last ditch effort to show his wife they were meant to spend the rest of their lives together.  When things go awry with Albie, Douglas goes to extreme lengths to make it right.  The story is hilarious, but there's an underlying sense of poignancy and desperation as he tries to keep his family together.  "Us" is a thoroughly enjoyable read that will make you laugh and -- quite possibly -- cry.

Note:  "Us" was long listed for the Man Booker Prize before it was published in 2014.  In addition (although not quite as lofty), the book has been chosen by Elaine Newton to be covered in her wildly popular "Critic's Choice" series at Artis-Naples.  I'm looking forward to hearing what she has to say.
at September 15, 2015