Since my flight to Scotland leaves from New York, it made sense to get my vacation started with some time in the City visiting friends and taking in some museums. It's been a wonderful few days. 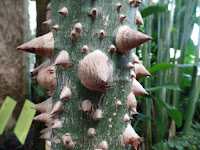 My first stop was the New York Botanical Gardens to see "Frida Kahlo: Art, Garden, Life." Neither Andrea nor I had ever been to the Botanical Gardens before (shame on us), so we started our visit with the tram ride around the 250 acres of gardens. It was slightly painful to hear the canned talk iterate over and over how the gardens are ablaze with color in the spring. We still saw plenty of flora, however, especially in the Haupt Conservatory. The Conservatory features 11 different environments, from tropical rain forest to desert. My favorite discovery was the floss silktree, which distinctly reminded me of an instrument of torture. 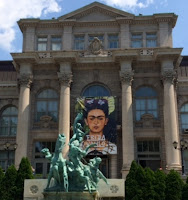 The Frida Kahlo exhibit itself was slightly disappointing, as it featured only 14 works. Other than her "Self-Portrait with Thorn Necklace and Hummingbird," which serves as the banner for the show, most of the work was botanical in nature. (Shocking, I know, for an exhibit at the Botanical Gardens.) I will say, though, that the NYBT knows how to work a theme. One area in the Conservatory had been converted into Casa de Azul, the blue-walled home Kahlo shared with muralist Diego Rivera. The home's garden had been faithfully recreated, and it was easy to see why Kahlo would be inspired to paint there. Other related activities included a mariachi performance and a Mexican cooking demonstration and a taco truck. All in all, a thoroughly enjoyable outing.

Next up was The Jewish Museum's "Revolution of the Eye: Modern Art and the Birth of American Television." How could I resist a show featuring two of my favorite things?

This show was also small, but there were some great take-aways. As I entered the exhibit, the intro to Rod Serling's "The Twilight Zone" was running on a large screen. "There is a fifth dimension beyond that which is known to man...This is the dimension of imagination. It is an area we call the Twilight Zone." The relationship between surrealism and both the themes and visuals of "The Twilight Zone" was obvious once I saw the reference. (In this video of the opening montage, the connection practically hits you over the head.) I was interested to learn that Serling had mistakenly expected that social commentary hidden in a sci-fi show would slip by TV execs and sponsors. His perspectives about issues like race relations and gender roles apparently caused a fair bit of conflict.

"Rowan and Martin's Laugh-In" is an example of the equally obvious link between modern art--pop, op and psychedelic--and television. One look at this "Flashback Friday" video of Laugh-In clips shows the strong influence of these art styles on the show, from set design to wardrobe.  Even NBC's logo at the beginning is strikingly vibrant and a bit psychedelic.  Another classic example is the TV show "Batman," which took a page from Roy Lichtenstein and comic book art.

My week-end excursions primed me for the main event --  "America is Hard to See" at the Whitney Museum.  It's an amazing show in the Museum's terrific new venue.  Stay tuned for Part 2 of this post to get a peek into the exhibit.
at August 03, 2015