The Edinburgh Fringe Festival offers something for everyone:  theater, comedy, music, circus, cabaret, spoken word and pretty much anything else you can think of. There are established performers and newcomers hoping to make their mark.  Mark Thomas and Victoria Melody are two actors on this spectrum who shared their stories in an engaging way.

Mark Thomas is an award-winning stand-up activist (who knew that was a category of performer?) whose 2014 show Cuckooed was both engrossing and entertaining.  And so Thomas' show this year -- Trespass: A Work in Progress -- was one of our "must sees."

The show apparently picks up where Thomas' 100 Acts of Minor Dissent left off.  Over the course of an hour, Thomas regaled us with the ways in which he and his fellow troublemakers engaged in small acts of civil disobedience. Case in point: Thomas marched in front of the Houses of Parliament imagining the end of the British monarchy (which, unbelievably, is a crime punishable by life imprisonment under the Treason Felony Act 1848).

Thomas also organized picketers to protest in front of the new U.S. Embassy being built in London. The new construction includes a moat of sorts that will make doorstep protests impossible, so Thomas staged an anticipatory protest. Participants were invited to create placards they thought would be applicable in the future. "Stop the War!" seemed a natural. I wish I could remember some of the others, which were much more unexpected and clever.

"No loitering" signs on a public sidewalk outside of a gated community also sparked his ire.  Thomas' response was quite obvious:  to host weekly tea parties for passersby, complete with homemade cake.  While some of the residents weren't so keen on this, local walkers, joggers and cyclists enjoyed the gatherings quite a bit.  A peek at Thomas' website revealed that his "no loitering" gatherings are still going in full force. 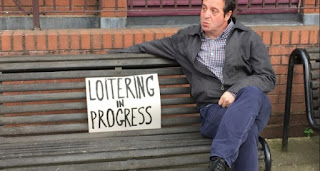 I will admit that during the course of the show, I found myself thinking what a nuisance Thomas is.  A funny nuisance, but a troublemaker nonetheless.  Sadly, I don't seem to have the soul of a social activist. But the more I consider Trespass' message, the more I appreciate it. And Thomas himself is both clever and a consummate performer, and I'd make a beeline to his next show.

To read a description by Thomas about some of his prior protests, click here.