I don't know why I expected the planning for Edinburgh Fringe Festival to be simpler this year.  Sure, Wendi and I know more about the lay of the land, so it's easier to figure out if we have the time to run between venues to catch the next show. (Last year there was one time we had to literally sprint a few blocks.)  But we're staying longer this year -- ten days of theater rather than six -- and the choices are mind-boggling.  Happily, there are a few familiar names in the 400+ page program to jumpstart our planning. 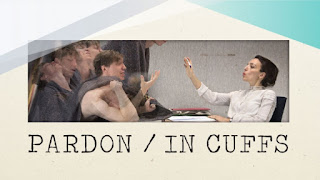 Two of my favorite performers from last year are back with what promise to be memorable shows.  The first is Valentijn Dhaenens, whose Small War was one of the most compelling and moving pieces of theater I've ever seen.  It's a show I would go back to see in a heart beat. (Click here to read about Small War, the story of an injured soldier and his nurse.  Both characters were played brilliantly by Dhaenens.) This year's show, Pardon/In Cuffs, takes on the subject of a criminal and his relationship to the justice system.  I expect it to be similarly intense and thought-provoking.

Then there's Trygve Wakenshaw from last year's Kraken.  (Click here to read about this hilarious show, during which I was treated to a kiss and a naked man--not to be confused with a kiss BY a naked man.)  This year's show is called Trygve Wakenshaw: Nautilus, and that's about as descriptive as it gets. The program promises "one of the most fall about, wet yourself laughing hours at this year's fringe." I can't wait to see what Wakenshaw has in store for us!

Like last year, Wendi and I are using UK theater critic Lyn Gardner's thoughts about what to see as a guide. I was quite surprised to find a recommendation of I Am Not Myself These Days, an adaptation of Josh Kilmer-Purcell's book by the same name. Josh Kilmer's father and stepmother live in Punta Gorda and I met Josh and his husband Brent Ridge when they were town. If Josh's name sounds vaguely familiar to you, you are probably a reality TV show junkie.  Josh and Brent had a show for two seasons called "The Fabulous Beekman Boys" about their transition from life in NYC to life on a farm in Beekman, New York. The "boys" also won "Amazing Race" in 2012, so their lives are pretty interesting (not to mention very public).  The book/show is the story of an earlier, more difficult time in Josh's life when he worked as a drag queen while struggling with alcoholism and a dysfunctional relationship.

I'm also looking forward to seeing Blind Summit's Citizen Puppet.  The group performed last October at the Ringling International Arts Festival, and I fell in love with Moses, the puppet who starred in The Table.  (Click here to read about that show, which was an award-winner at an earlier Fringe Fest.)  The play tells the story of a giant who fell from the sky from the perspective of a cigarette smoking grandmother puppet.  I know it sounds out there, but I am in for any show by a group that made me double over in laughter during its play about Moses and a Passover seder.

Last year we saw 36 shows in six days.  Doing the math, that would translate into 60 shows during our ten day stay this August.  Four down, 56 to go.  We're in the process of booking about 40 more shows now.  I'll report back before we head over on some of the shows I'm most looking forward to seeing.  I can't wait.
at July 05, 2015