I admit to going into Urbanite Theatre's "Reborning" with a bit of trepidation.  The show is about an artist who makes hyper-realistic dolls and a customer anxious to recreate her past.  Hmmm.  Not a description that would typically make me think, "I must see this show."  And the ad for "Reborning" with its picture of a doll that I mistook for a real baby kind of freaked me out. But Dorrit and I had our tickets in hand, so we headed off to Sarasota to find out what this show was all about.

When we entered the tiny theater, I immediately noticed that the guy sitting in front of me was holding a baby.  Upon further study, I realized that it was not an infant at all, but a doll.  (I know, I should have been onto this by now!)  I had to find out what the story was.  Anthony Spinelli is a jeweler by day who sculpted the silicone "Rebecca" as a prototype. Completely apart from Urbanite's staging of "Reborning, Spinelli discovered that hyper-realistic dolls can go for big bucks (up to $15,000) and decided to have a go at it.  Four months later, Rebecca was "born."  He let me hold her, and the moment she was in my arms I began rocking her as if she were a real baby.  It was just a natural instinct after being given a 9 1/2 pound sculpture whose little hands had all the wrinkles of a real baby and whose eyes looked up at me engagingly. (For the record, Dorrit had the same reaction when she held her.)  The only "issue" with Rebecca is that her coloring is a bit off.  Spinelli agreed that he had been a bit too liberal with the white paint when working on his creation. The skin under Rebecca's skull cap, though, is the rosy color of a healthy infant, and he plans to go with a more natural tint for his next "baby." This chance encounter truly set the stage for a powerful evening of theater. 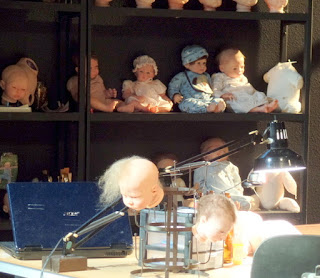 The play opens with heavy metal music blasting and the smell of a burning joint in the air.  Kelly (played to perfection by Megan Rippey) leans over a doll with a pair of tweezers in her hand.  The disturbing image of a single eye on which she is meticulously placing a set of eyelashes is projected on the screen above her.  Kelly's work is interrupted by a buzzer.  Emily, a customer, has dropped by a day early to pick up her doll.  Kelly rushes around spraying room freshener and changing the music to Brahms' soothing lullaby to create a nursery vibe.

Over the next 90 minutes, we learned both how Kelly came to create "reborn" babies and what drove Emily to seek her out. As with Urbanite's production of "Chicken Shop," I found myself engrossed in the story and almost breathless at times from its intensity.  The acting was superb (something I am rapidly coming to expect from Urbanite). The staging was terrific, too, and its use of the overhead screen gave the audience the chance to see the artistic process through Kelly's eyes.  Overall, a top notch production.

"Reborning" is playing through July 5th, so there's still time for theater lovers to take in this show.

Next up at Urbanite is "Isaac's Eye" by Lucas Hnath. Hnath blends history and fantasy in this tale envisioning what drove a young Isaac Newton to explore the relationship between light and optics by inserting a needle "between my eye and the bone, as near to the backside of my eye as I could."  It promises to be another compelling night of theater.  I can't wait.
at June 25, 2015