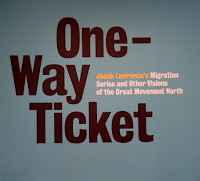 I was introduced to Jacob Lawrence's Migration Series a couple of years ago when the Tampa Museum of Art hosted an exhibit of works from The Phillips Collection. I distinctly remember turning a corner and discovering five folk art style paintings depicting the migration of African-Americans to the North that began during WWI.  I was struck by the power of the story despite (or perhaps because of) the simplicity of the works.

The artist--Jacob Lawrence--created a series of 60 paintings that portrays both the reasons for and the consequences of the multi-decade migration. Shortly after their creation, the panels were purchased by MOMA and The Phillips Collection and divided, with the even-numbered panels going to MOMA and the odd-numbered to The Phillips. I've since had the chance to see all of The Phillips Collection's paintings, and it was a treat.  So when I learned that MOMA had the entire series on display during my recent trip to New York, I hightailed it to the exhibit. I was not disappointed.
﻿
Along the way, I learned some interesting tidbits about Jacob Lawrence:
--Lawrence, who was only 23 when he painted the Migration Series, had already completed extensive series of paintings about Frederick Douglass, Harriet Tubman and Touissant L'Ouverture.
--Lawrence received a $1500 fellowship from the Rosenwald Foundation to create the series.
--Lawrence's parents were among the 6 million people who participated in the migration.  He was born in Atlantic City and had never been to the South before he painted the series. He researched the topic at the Schomberg Collection in Harlem.
--Lawrence was the first African-American artist to be represented by a New York gallery.  His Migration Series was displayed at the Downtown Gallery upon its completion.
--In 1993, Lawrence rewrote the captions for the paintings in connection with a national tour of the series. MOMA has a bank of computers where you can view a more detailed description of each painting, the 1941 caption and the 1993 caption.

Viewing all of the works in progression is a powerful and thought-provoking experience.  The fact that the works have narrative captions rather than brief titles makes the exhibit read like a book. Panel 1 explains, "During World War I, there was a great migration north by southern African Americans." Panel 60 simply says, "And the migrants kept coming." The story unfolds in the intervening paintings.


Having never seen the even-numbered panels, I found myself particularly drawn to them. Panel 4 is captioned, "The Negro was the largest source of labor to be found after all others had been exhausted." The more detailed description of the work commented on the contrast between the man displayed in this panel and the depictions on WPA posters and murals of burly workers happily heaving their tools. (As a side note, Lawrence was a WPA artist himself for 18 months.  He was required to turn in two paintings every six weeks in exchange for $95.44 in pay.)


Panel 38 is a simple picture of a railroad track and is labeled, "They also worked in large numbers on the railroad."  The railroad was a crucial part of the migration, both as a means of transportation and as an industry that provided work for the migrants. And, of course, there's an underlying reference to the Underground Railroad on which many African-Americans traveled in an earlier time.


Although life was generally better in the North, there were still issues. Panel 50 depicts the race riots that occurred when African-American workers took jobs from white workers, sometimes in the role of strike breakers. African-American homes were also bombed in protest. Cramped living conditions resulted in many migrants contracting tuberculosis.

And yet the migrants kept coming.

To see a complete set of the Migration Series (with commentary and both sets of captions), click here.

Next up:  Multi-media components of the exhibit