Even if you don't know the name Ruby Bridges, my bet is that you recognize her picture.  In 1964, Norman Rockwell memorialized Ruby's walk to her first grade class at William Franz Public School in New Orleans. The time was 1960, and desegregation was just underway in Louisiana (six years after the Supreme Court's ruling in Brown v. Board of Education).

I had the chance to hear Ms. Bridges speak at the Tampa Museum of Art last week in conjunction with an exhibit of Norman Rockwell's art. Her words were moving and inspirational.

As Ms. Bridges took the stage, video played of the angry crowds whose gauntlet she had to run each morning with four U.S. marshals clearing the way. (Many women and children were in the crowds, and they were all too happy to have their pictures taken to show their opposition to integration.) But before we get there, the story of how she came to be at William Franz is worth sharing.

When integration finally loomed in New Orleans, segregationists worked to devise ways to keep the black children out of their schools. The first step to gain eligibility to attend a white school was to pass a written test.  (I haven't been able to find out the content of the test, but I do know this wasn't a requirement for the white kids.)  Approximately 130 children took the test, and only six passed.  Ruby was one of those children.

And so, after much debate between her parents, it was decided that Ruby would go to the all white William Franz Public School.  At the time the decision was made, two other little girls from her neighborhood were scheduled to attend with her.  They dropped out, however, leaving Ruby as the sole black student in the school. 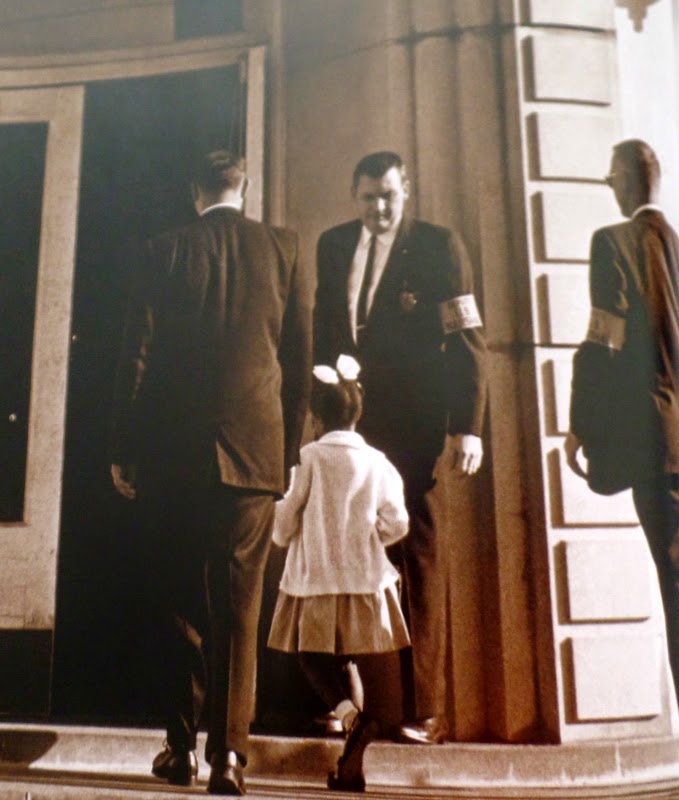 Ms. Bridges said she didn't know much about what was happening.  Her parents had told her she was going to a new school and that was that.  Ruby had attended kindergarten, so school was nothing new to her. But having to take a test to get in made her realize something special was happening.  Perhaps she was going to college, she thought.  When the U.S. Marshals showed up to drive her (and her mother) the five blocks to school, she was confused, but she got in the car as her parents instructed. The procession of neighbors following the car to the school reminded her of a Mardi Gras parade.  So did the noise of the crowd when they arrived at the school as people chanted, "Two, four, six, eight, we don't want to integrate." (Not knowing the meaning of the word "integrate," Ruby later used this chant when she jumped rope with friends.)

Ruby and her mother were escorted into the school and to the principal's office.  The office had windows, and she could see lots of adults coming into the building and leaving with their children.  "College is a busy place," she thought.  The reality was that the parents were taking their kids out of school in protest. While everyone knew that two New Orleans schools were to be integrated that day, nobody knew which ones. At the end of the day, Ruby was the only child at William Franz.

For many months, Ruby was taught in a class by herself by Barbara Henry, a teacher who had recently moved from Boston.  Ruby was not permitted to eat in the cafeteria due to threats to poison her.  On the rare occasions she and Mrs. Henry went to the playground, no kids were outside.  There were only a few men in suits lurking at the perimeters.  (They were plain clothes policemen protecting her from harm.)

It was a lonely time for Ruby, but she and Mrs. Henry became best friends.  They never missed a day of school.  Eventually, Mrs. Henry realized there were four other first graders being taught in a separate classroom.  She had to threaten the principal in order to get the classes combined (and then it was only for part of the day). Ruby finally had some classmates and, over time, friends.

By the time Ruby entered second grade, first and second grades in all the New Orleans schools were integrated.  It still wasn't easy, but, as Bob Dillon sang, "The times they [were] a-changing." As current events show, however, we still have a long way to go.