Our latest Citizens Academy session found us at the Public Works Department.  Department Director Rick Keeney kicked off the session by commenting that the members of his Department are the "unsung heroes" of Punta Gorda. After spending the morning learning the scope of what these men and women do, I'm in whole-hearted agreement with his characterization.

Here are some of the highlights:

--For PGI residents like me, the canal maintenance program was particularly interesting. The PGI canal system was built in the 1960s and '70s. Approximately 27% of the original canals have been replaced.  The seawalls are held in place by "dead man blocks" that extend 16 feet into the yard.  They weigh 1500 pounds. Tie back rods connect the sea wall panels to the dead man blocks.

--The sea wall panels are built on site at the Public Works Department.  (Yes, this is unusual.)  Each panel is six inches thick with a rebar in the middle and weighs approximately 5,000 pounds. (Note: The original walls were only four inches thick.) They typically pour 15 panels a day to keep a supply on hand.

--Residents who live on the canals are in a special tax district that funds canal maintenance and reconstruction. The annual tax is $500 per lot; i.e., it is not based on linear square footage of seawall.

--Residents are responsible for their own dredging outside of the navigable channel. While boat owners sometimes complain about not being able to dredge as deep as they would like, there's a good reason for the restrictions. The berm at the bottom of the canal helps hold the sea walls in place. Less berm translates into more maintenance.  Similarly, homeowners should not edge along their sea walls.  While the look might be nice at first, the eventual crumbling of their sea walls due to water seeping in behind them will not be attractive.

--The discussion about the sanitation division (essentially trash and recycling collection) had the students on high alert. You heard it here first: The City is considering moving from the 18 gallon blue recycling bins to a single rolling 48 gallon bin. Some studies indicate that the larger bins promote more recycling. Given Punta Gorda's demographics, its residents might also prefer rolling their recycling out to the curb to lifting and carrying.  (Note: Despite the two bins we currently have, PG's recycling is single stream, meaning you can mix plastics and paper.)

--Plastic bags are high on the list of bad things people put in their recycling bins. Bags can easily get tangled in the sorting machinery, leading to the operation being shut down while the bag is manually removed. Pizza boxes and styrofoam are also no-nos. So are those popular LED and CFL light bulbs, which contain a small amount of mercury. Home Depots/Lowes have bins for their disposal. 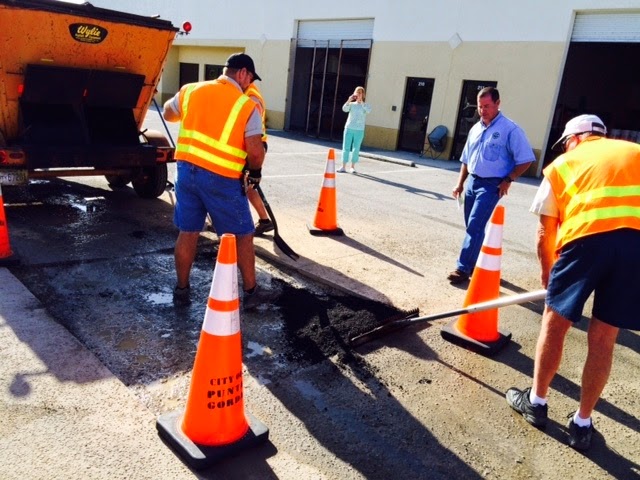 --We toured the Public Works grounds and were treated to a demonstration of a pot hole being filled. The hot patch is 300 degrees when laid down.  In order to compress the area, workers use a rolling machine with a handle that swings front to back. For larger pot holes, the worker flips the handle over to his teammate at the midpoint so neither have to step on the hot patch.  It takes approximately 20 minutes to set and cool.

--The Engineering Division has the "pleasure of taking care of projects while they are being built."  Their current projects include the pickleball court conversion in Gilchrist Park and the re-bricking of Durrance Street. They are also responsible for ADA compliance of the City's sidewalks and buildings. When a road is resurfaced, the adjacent sidewalk has to be upgraded. So, for instance, the sidewalks on Aqui Esta have "tactile surface warnings" that alert visually impaired pedestrians to an approaching intersection and curb ramps that allow wheelchairs to enter the intersection. (The curb ramps are great for bikers as well.)

I will admit (with some chagrin) that I have taken the job done by the Public Works Department for granted. Thanks to the Citizens Academy for raising my awareness.  Now it's time for me to get my recycling to the curb.
at April 15, 2015