Although I moved to Punta Gorda almost five years ago, my friend Ellen had never made it for a visit.  So I was thrilled when she finally booked a 48 hour get away.  She would have been happy just sitting on my lanai looking at the water and enjoying the warm breeze on her face.  (She did, after all, leave a foot of snow behind in New Jersey.)  I had other ideas, though, on how to introduce her to life in Southwest Florida. 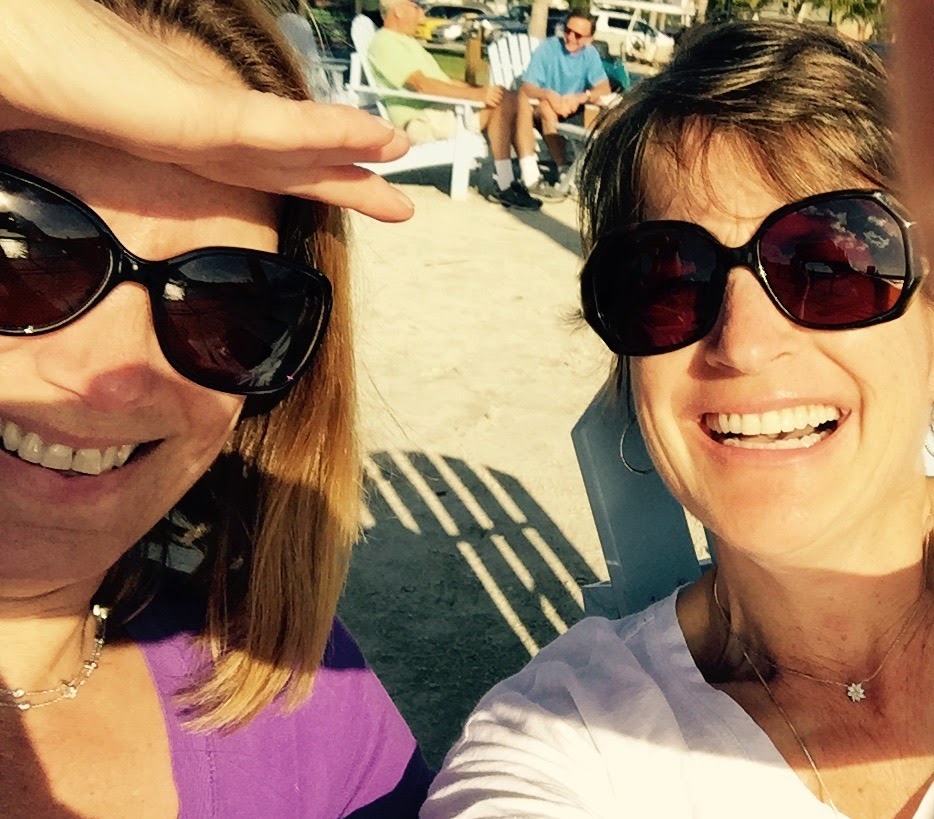 We eased into the visit with some time at the Tiki Bar on Friday afternoon.  (A selfie to be sent to her kids and husbands was a must.)  It's hard to look at this picture without thinking of the expression, "The future's so bright, we've gotta wear shades!"

After a quick dinner, we were off for our evening's entertainment -- a concert by Valerie Sneade.  The venue was a bit odd -- the Kings Gate retirement community clubhouse (complete with, well, lots of very retired people).  I have to admit that if I had actually understood where we were going, I would have chosen something else -- and we would have missed a fun show.  Sneade has a great voice and she definitely knows how to work the audience.  Her band -- led by musical director Michelle Kasnofsky -- was fabulous.  Sneade and her Turning Leaf Productions are definitely worth putting on your radar screen.

Saturday found us off to one of my favorite destinations -- Asolo Repertory Theatre -- to see the Tony-nominated "Good People" by David Lindsay-Abaire.  (If Lindsay-Abaire's name sounds familiar, he also wrote "Rabbit Hole," a play that was made into a movie starring Nicole Kidman.)  I had heard great things about the show in general and the Asolo's production specifically, and we weren't disappointed. The play deals with issues of class and relationships through the lens of a group of "Southies" who grew up together outside Boston. There's lots of humor, but lots to think about as well.  The cast was terrific, with Denise Cormier debuting at the Asolo in the role of Margie and Tim Grimm (who wrote the music for last year's production of "Grapes of Wrath") as Mike. If you're in the area, the show runs through March 1. I highly recommend it.

After a quick dinner at Owen's Fish Camp, we were off to a screening of "The Good Lie" at the Ringling School of Art and Design followed by a discussion with Aaron Osborne, production designer for the film.  The movie follows the journey of a group of "Lost Boys of Sudan" who travel from the Sudan to Kansas City via the Kakuma Refugee Camp in Kenya.  Although the story is fictitious, it is representative of the experiences of the estimated 20,000 boys who were displaced or orphaned during the Second Sudanese Civil War.  Some of the children walked more than 1,000 miles to reach safety.  The Kakuma Refugee Camp still houses more than 150,000 refugees.

While Reese Witherspoon got top billing in the movie, it is actually the four "lost boys" (one of whom is a girl) who are the stars.  I didn't learn until the credits rolled that all four were Sudanese refugees in real life and that two had been child soldiers.

It was fascinating to hear Aaron Osborne speak about his work. The production designer is responsible for the overall visual look of the film, including setting, props, costume and location.  We learned that, amazingly, the original budget for the film did not include funds for even a visit to Kakuma Refugee Camp, much less any filming abroad.  Although Osborne is known for working on a shoestring budget, he convinced the money guys that it would be virtually impossible to recreate African savannahs and sunsets on a lot in Atlanta. Osborne talked about the painstaking detail that goes into creating an authentic portrayal of a place and time.  For this film, one of the most challenging tasks was obtaining rights to use the United Nations' logo on the tents in the camp.

As we headed home from Sarasota, Ellen commented that it was going to be hard to go back to New York.  She wasn't referring to the weather, but to the number of fun and interesting cultural events in our area.  Mission accomplished.
at February 12, 2015