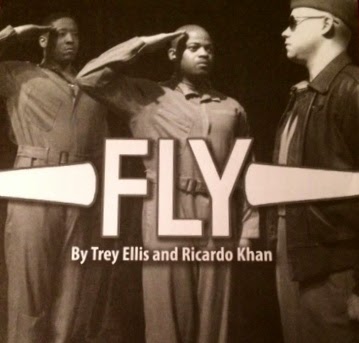 In May 1939, then-Senator Harry S. Truman helped sponsor a bill allowing African-American pilots to serve in the Civilian Pilot Training Program.  This bill led to the establishment of an all black fighter squadron known as the Tuskegee Airmen.  (The pilots trained near Tuskegee, Alabama.)  "Fly" tells the story of four fictional men who participated in this program. It is a vivid portrayal, and a show well worth seeing. 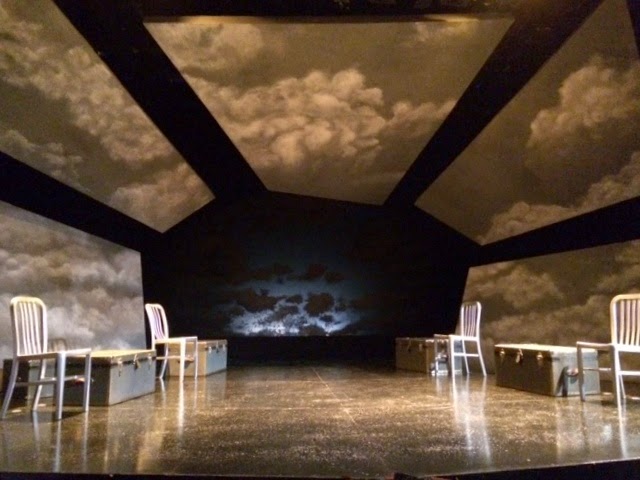 I was captivated from the moment I entered FST's Gomertz Theater.The set was fabulous, with six cloud-filled screens representing the sky. World War II-era music helped set the mood.

As the play opens, Chet, now an old-timer, is thinking back to his years as an airman. Within moments we are introduced to his fellow trainees. There's Oscar, a "race man" who signed up to show the world that African Americans are as good as anyone else. WW is the consummate ladies' man who joined to impress a particularly hard-to-get woman. J. Allen is from the British West Indies and grew up with a father who ran to the airfield whenever a plane came in. And Chet is a wet-behind-the-ears 18 year old who is the only trained pilot in the group.

Over the next 90 minutes, we followed the men from their initial meeting with their training sargeant (who is anything but supportive of the program) through some tough battles. I particularly loved the scene when the flight instructor took the newbie pilots up--one by one--for their first flights. The instructor sat in a chair behind the pilot, and they veered right and left and up and down as the clouds moved on the screens around them. There was a real sense of movement, and you could feel the men's excitement as they took to the sky. (The landings were another thing all together.) 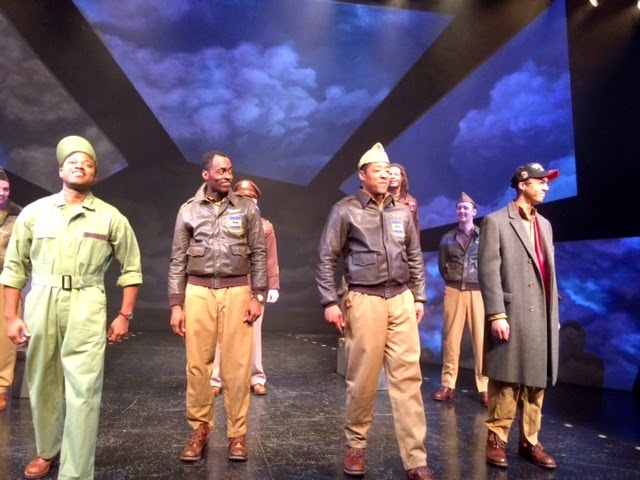 From the opening scene, the action is moved along with the assistance of an incredibly strong tap dancer wearing fatigues. When my friend Paul and I talked about the play later, we both confessed that we were a bit concerned about how the dancing would fit into the production.  Would it overwhelm the play and become distracting?  The device was used judiciously and effectively, though.  (Interestingly, the name of the tap dancing character is Tap Griot.  A "griot" is a member of a West African caste whose function is to keep an oral history of a village or tribe by entertaining through storytelling, music or dance.)

"Fly" was commissioned in 2007 for the Lincoln Center Education program. Each summer, Lincoln Center Institute brings hundreds of educators around the country to New York for "in-depth educational workshops designed to maximize imagination in the classroom."  The Institute gives educators ways in which to use the arts to bring subjects like history and science to life.  I can only imagine how much fun everyone from the LCI instructors to the educators to the students had with "Fly."

I haven't seen many productions at Florida Studio Theatre, but if "Fly" is representative of the caliber of its shows, I will be spending a lot more time there. It's a well-written, well-acted, engaging show that made me laugh and cry and think. In fact, my curiosity has been piqued about the Tuskegee Airmen and the movie of the same name (co-written by Trey Ellis, who co-wrote "Fly") is now in my Amazon watch list.  In my book, that stacks up to a great production.

"Fly" will be playing at Florida Studio Theatre through April 4.   Don't miss it.