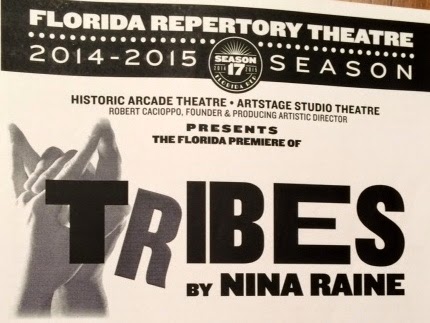 As much as I love going to the theater, it's not unusual for me to leave a show and never give it another thought. And so when scenes from a play keep returning to me more than a week later, I know I saw something special. "Tribes" at Florida Rep's ArtStage Studio Theater was just such a performance.

In a nutshell, the story sounds almost run of the mill. "Tribes" is about a family with three grown children, all of whom live at home. There's the obvious conflict that arises from the situation.  One of the sons meets a woman and the relationship leads him to break away from the family unit.  More conflict ensues. The family eventually reaches a tentative truce (although you know it is not a "happily ever after" story.)

This synopsis does not, however, even begin to scratch the surface of this particular nut.  Billy, you see, is a young deaf man born into a hearing family.  In the opening scene of the play, the family sits around a dinner table engaged in an animated conversation/argument.  Billy is at the head of the table, quietly taking it all in.  Wanting their son to be as "normal" (and as much like them) as possible, the parents decided not to teach him how to sign.  Instead, he learned to read lips and body language--quite well-- but he still is forever on the outside asking, "What's happening?" 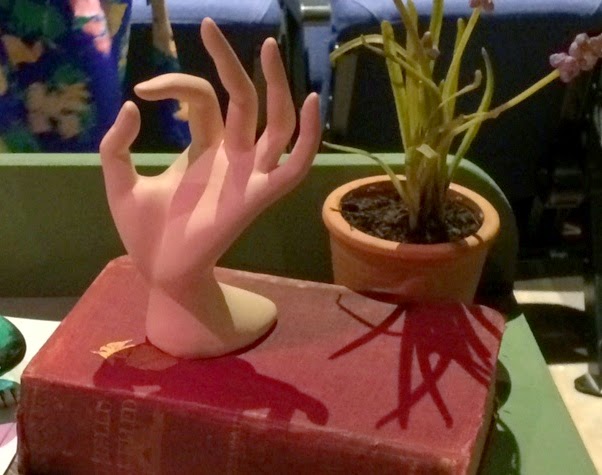 As the play progresses, Billy attends a Deaf event where he meets Sylvia, a hearing woman whose parents are deaf.  Sylvia is losing her hearing, which puts her in a painful in-between world.  Unlike a person who's born deaf, she knows what she is losing, and it is heartbreaking to watch the joy of music and the ability to articulate her words slip from her grasp.  As Billy and Sylvia become a couple, he learns to sign, and it opens a whole new world for him.  The scene when he tells his parents that Sylvia is teaching him sign language is as fraught with emotion as a child coming out of the closet.

The play has so many layers that I cannot begin to do it justice here.  The Merriam-Webster definition of "tribe" is "a social division in a traditional society consisting of families or communities...with a common culture and dialect."  In every person's life, you come to a crossroads where you make choices about who "your" people are.  It's not typically as dramatic a choice, though, as the one that Billy is making.

I learned from the program notes that, "When capitalized, Deaf refers to a culture, as distinct from deaf, which is a pathological term."  And as with any culture, there's a hierarchy.  Sylvia explains to Billy's parents that people who are born deaf are at the top of the ladder, with pluses and minuses for things like not knowing how to sign (a minus) or having deaf parents (a plus).  As someone who is coming to the deaf party later in life, Sylvia does not have the same social status as Billy within the Deaf community.  (Yes, politics exist everywhere.)

The way playwright Nina Raines weaves in the contrasts between Billy and the rest of his family is pure poetry.  Both parents are writers for whom words are everything.  In one particularly emotional scene, Billy tells his family he won't see them any more until they learn how to sign.  He has lived in their world long enough; now, they must try to live in his.  Billy's father refuses, going back to the audio tape he is listening to to learn how to speak Chinese.  The irony is apparently lost on him.

Billy's brother has an undefined mental illness that causes him to hear voices.  Spending time with Billy is one of the few things that soothes him, so the break between Billy and his family exacerbates his illness.  His sister is a wanna be opera singer, again living in a world lost on Billy.

As complex and moving as "Tribes" is on the written page, it could have fallen flat without the right actors.  Florida Rep somehow found a group of actors who seemed born to play these roles.  Britt Michael Gordon as Billy was nothing less than stunning.  I was surprised to learn that he is a performance intern with Florida Rep. Britt spent months being mentored by the deaf community for his performance, and his manner of speaking perfectly captured the language of the deaf people I've known. I was also struck by the emotion behind his signing, with exhalations of breath serving as exclamation points.  I am eager to see him in other Florida Rep productions.

My only regret is that I saw the show on the last day of its run.  Otherwise, I would have gathered all of my theater-going friends and shared this remarkable production with them.  If you have the chance to see "Tribes," run--don't walk--to get tickets.  It's a theater experience you won't soon forget.