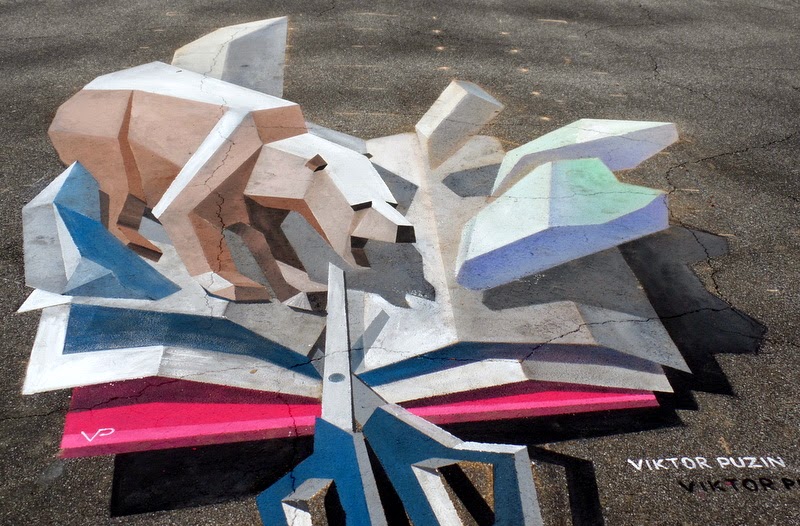 For the past couple of years, my friend Carolyn Hamilton has urged me to check out the Sarasota Chalk Festival.  The timing never seemed to work, though.  Happily, I finally made it this year -- and it was even easier to get there with the Festival's move to Venice.  (Confusingly, it's still called the Sarasota Chalk Festival.  Founder Denise Kowal explained that the enthusiasm of the Venice City Council for this community event was one reason for the move.The name "Sarasota Chalk Festival" was retained, however, because it's a world-recognized event, and they didn't want the Festival to lose its global audience. In addition, the Venice Art Center hosts its own--much smaller--chalk festival each year.)

Each year the Festival has a theme, and this year it was Extinct and Endangered Species.  The main event at the Festival was an attempt (which was successful) to secure a new Guinness World Record for the largest work of pavement art.  With Venice being the shark tooth capital of the world, the centerpiece of the work was a Megaladon shark with is jaws open just waiting for lunch.  Kurt Wenner, the innovator of 3D pavement art, designed the 18,900 square foot work.  Its medium is tempera, which is semi-permanent.  More than 125 local, national and international artists spent 12 days creating the work on a runway at Venice Municipal Airport.  We were told that communication was the biggest issue in the work's creation but that "art is a universal language."  The results were pretty cool. 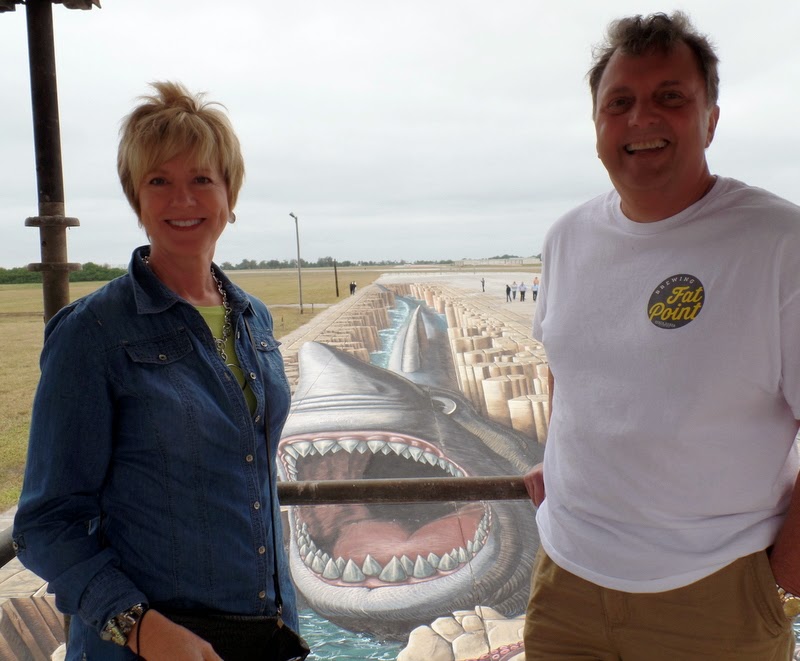 I went to the Festival with my friends Susan and Steve, and the airport was our first stop.  We arrived early on the first day of the Festival and waited in line to climb the viewing tower.   We snapped some shots from the platform and then Susan and I climbed down and, after making a small donation, casually strolled into the shark's mouth for our photo opp.  (Disappointingly, the pictures are only available in hard copy, so I couldn't include our "Jaws" moment here.)  Shown here is my photo of the work.  (The small person on the left hand side of the photo will give you a sense of scale.  The work was 42' wide and 450' long.) 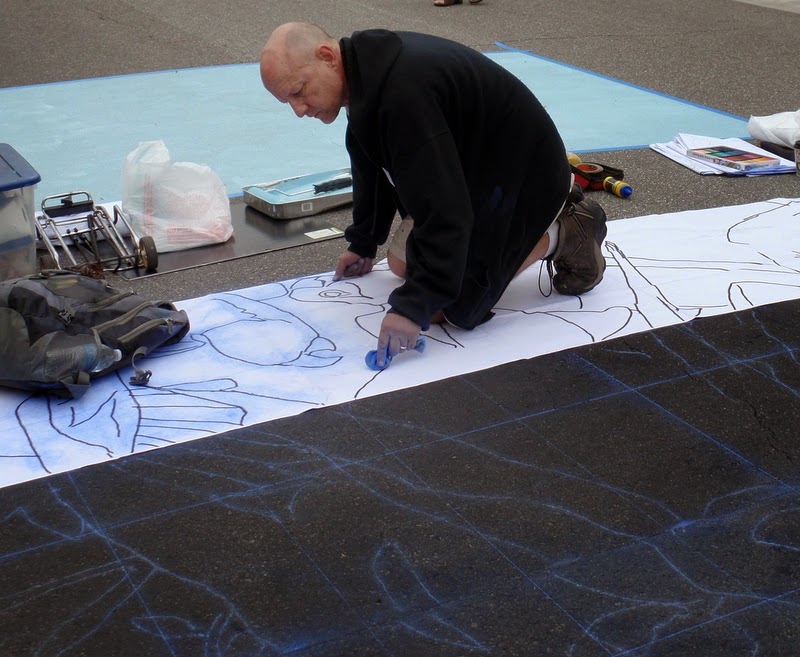 From there we took a shuttle into downtown Venice where two other venues awaited us.  Because it was the first morning of the Festival, many of the artists creating more traditional 12' x12' works and smaller 3D paintings were just getting started.  It was interesting to watch the artists' different techniques for sketching their designs.  One guy had drawn his work on a piece of paper with tiny little holes in the outline.  The paper was laid on the pavement, and he transferred the design to the pavement by hitting the ground with a sock filled with blue chalk.  (I'm quite sure there's a more artful way of describing this technique, which he attributed to Michalangelo.)  Some artists drew by hand on the pavement.  Still others worked standing with chalk at the end of a long device.  (One artist shared that she had used a curtain rod for her extension.) 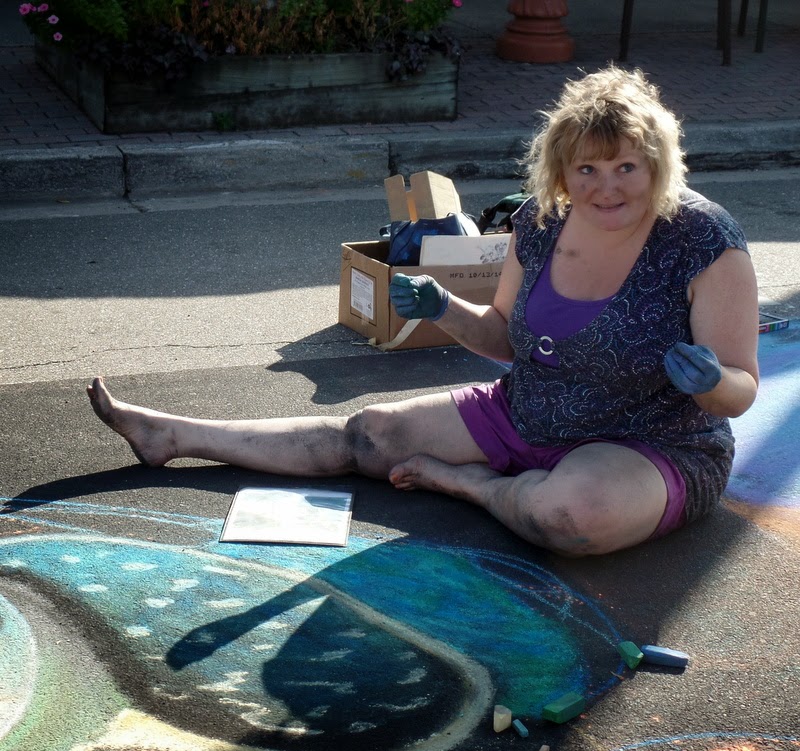 Once the design was sketched, the artists got to work filling them in.  As you can see, it's dirty work, but everyone seemed to be having a great time.  One of the unique things about the Festival is that anyone who registers can create a piece of pavement art.  In fact, there were designated areas for students and kids to create art.  Unfortunately, we didn't get a chance to check this out because we were there on a school day.  (Having said that, Ms. Kowal said that 90% of the world's best known chalk artists were participating in the Festival.) 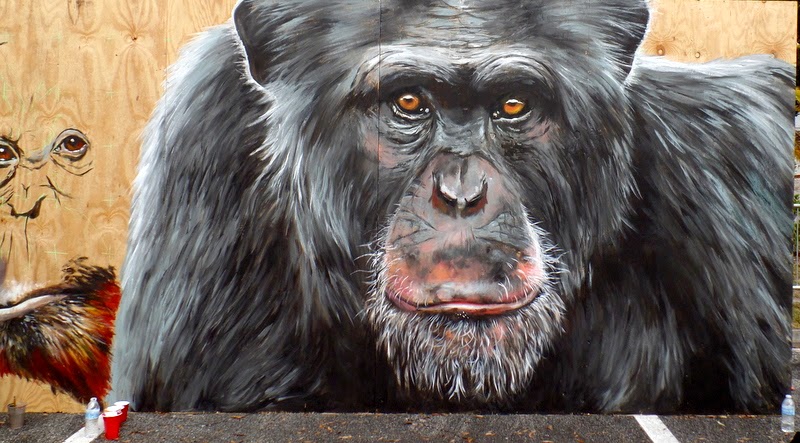 The final section of the Festival included larger 3D works and works being done on plywood.  (FYI, the plywood works would be characterized as "street art" which, Ms. Kowal explained, tends to be vertical.) These artists had gotten a head start on their work, so there was more actual art to see here.  Of course, it is difficult to appreciate 3D art when you are standing next to it.  Festival organizers have thought of everything, though, and different techniques for viewing 3D art were available. My favorite was a lens that you could swivel around to get a 360 degree view of the work. Definitely more effective than standing on tippy-toes and aiming your camera for a shot. 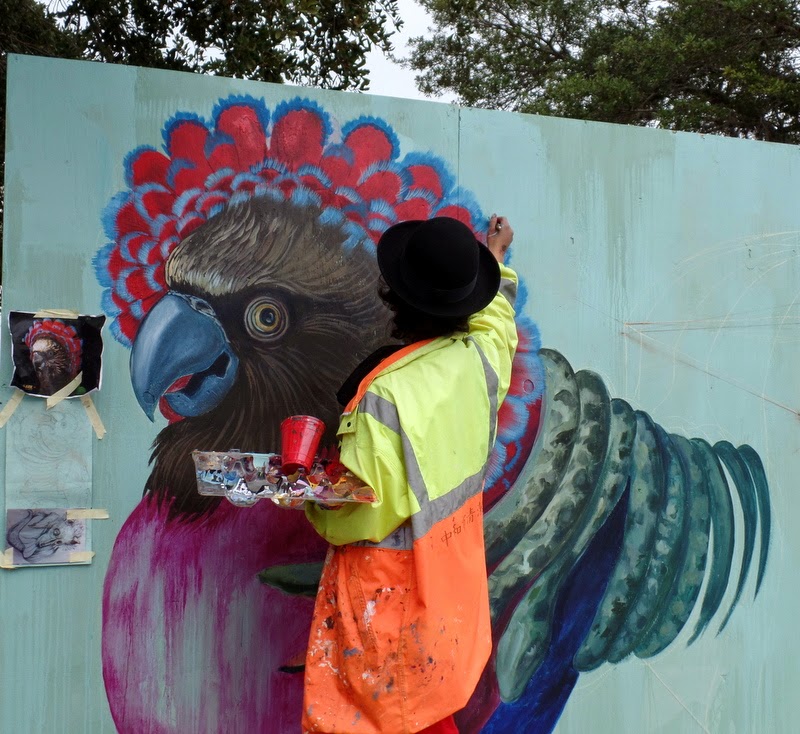 There's lots more to say about chalk art in general and the Sarasota Chalk Festival specifically, but I'll save that for next year.   Thanks to Carolyn for getting the Festival on my radar screen!
at November 28, 2014