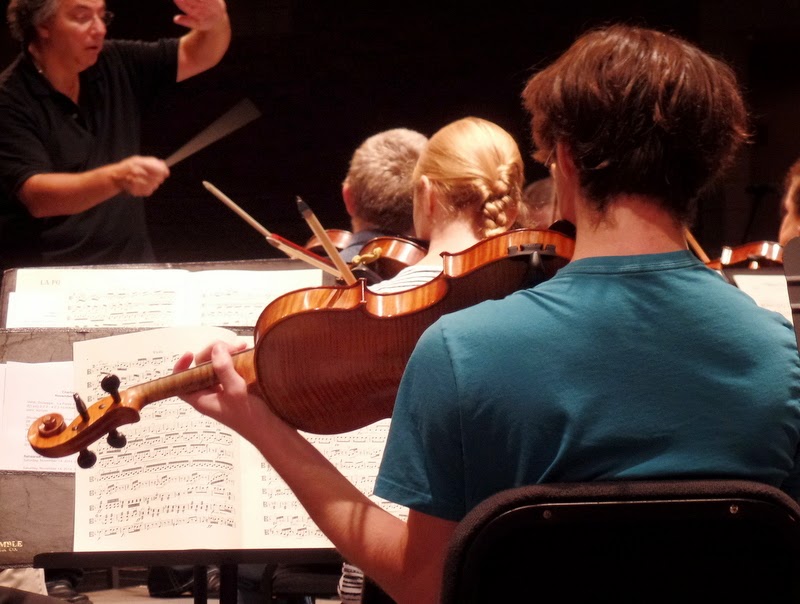 Last year Maestro Raffaele Ponti and the Charlotte Symphony Orchestra initiated a "musical chairs" program for young musicians in our community.  Local students were invited to attend a symphony rehearsal and sit with "their" instrument's section.  It's a wonderful way for kids to get an earful of what their instrument sounds like in the hands of a professional musician--and a great way to build the audience of the future.

This year the musical chairs program has been extended to adults in the community.  The best part is that non-musicians--like me--have the chance to participate.  Last month I listened attentively to a talk the Maestro gave entitled "The Psychology of Music: What Instrument are You?"  He asked us to think about the personality traits he attributed to the musicians who play particular instruments. Then he invited us to come to a rehearsal of the CSO for its first concert of the season and to sit with the musicians whose personalities most resemble our own.  Score! 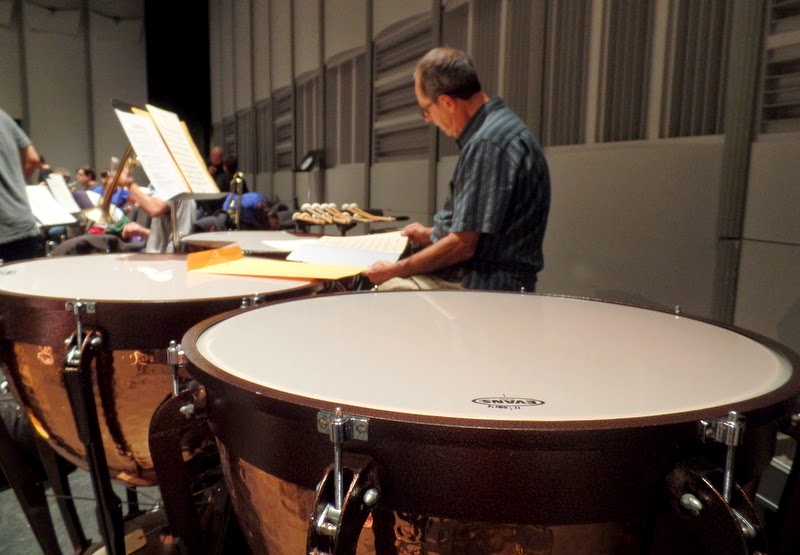 Bright and early last Saturday morning, I nestled in next to the timpani in the back row of the orchestra.  In his talk, the Maestro said that percussionists spend their lives thinking about things they can bang, scrape or pluck and that they tend to be quirky, fun and patient.  While I can't say that's how I would describe myself, I often find myself smiling at the percussionists' contribution to a concert. And so percussion it was for me.  (I note that Raffaele's description does seem to fit timpanist Fred Eckler like a glove.  When I asked how he came to play percussion, he shared that he went to a performance by a sound effects guy at Radio City when he was six years old.  "I fell in love with noise," he said.)

The first thing that struck me from my seat on the stage was how loud it was when the musicians were warming up.  Once the Maestro was ready to start, concertmaster Stewart Kitts stood and said, "Let's tune."  With that, Raffaele took his position at the podium, greeted the musicians (about half of whom were new to the CSO), and announced that the morning rehearsal would focus on Dvorak's Symphony No. 7.   He raised his arms and they were off. 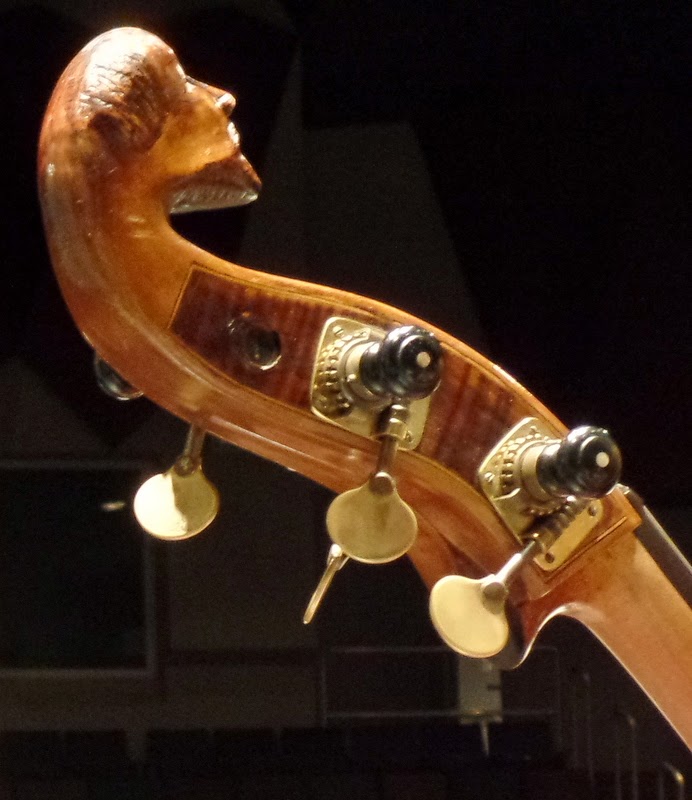 What a treat it was to be able to really see the way the Maestro interacts with his musicians.  I was struck by the crispness of his arm movements and the multitude of expressions that crossed his face.  At one point he put his fingers to his lips as if shushing a small child.  Other times he almost danced. The orchestra played the piece once through without much in the way of interruption.  Then it was time to mold the performance to fit the Maestro's interpretation of the music.

Maestro Ponti commented that he wanted the opening notes to create a sense of mystery, singing the melody to make his point.  At one juncture he said to the violins, "Take your panic out of this rhythm and let it relax."  When they arrived at the third movement, he announced, "Now for a little Czech dancing."  He asked the winds for "a little more soul" and the strings to "give it a bit of air."  When they reached the rousing finale, a section that Dvorak had labeled "poco animato," Raffaele exhorted the musicians to "take the poco out."  They played fast and furiously and with the passion of people doing something they love.

During the break, Raffaele chatted with us about his approach to rehearsals.  He works first on the "architecture" of the music, then on the tempo and nuances.  He doesn't play it safe, pushing the musicians to play at the tempo he wants in the performance.  There's no time to work up to it really, with rehearsals starting on Saturday for the Sunday evening concert.  He talked about the challenge of convincing the musicians that his interpretation is best.  (A couple of times he asked the musicians to forget about the recordings of the music they had heard.) 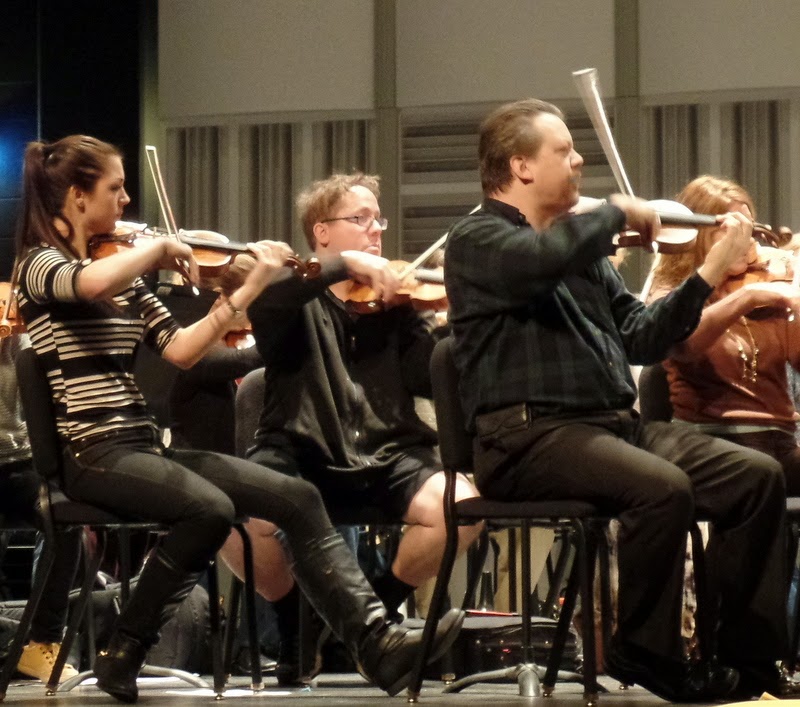 Then it was back to work, with the musical chairs participants now listening from the audience.  There's no doubt I have a greater appreciation of what goes into the performance having had the chance to sit amidst the musicians.   And having identified myself with the percussion section, I will now be rooting for the CSO to perform works that require lots of banging, scraping and plucking.

The CSO intends to offer more opportunities for community members to get up close and personal with the symphony in this way.  If you get an invite, jump on it.  It's an experience you won't soon forget.