The Arsonist by Sue Miller 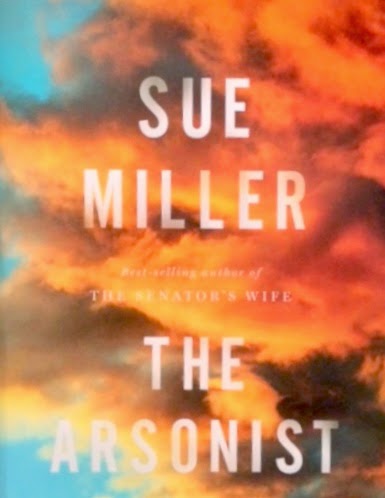 Like many readers, I remember Sue Miller as the author of The Good Mother from nearly 30 years ago.  And so I was interested to meet her and pick up her most recent novel at this year's Book Expo.  What I hadn't realized was that Miller has penned several other books whose writing and storytelling I've enjoyed over the years.  In fact, her Lake Shore Limited was one of the first books I blogged about back in 2010.  Perhaps it's the everyday-ness of her name that has made it hard for me to remember.  With The Arsonist, however, Miller has firmly placed herself on my literary radar screen.

The Arsonist tells the story of Frankie, a woman who has spent the last 15 years in Africa working in aid relief.  She has come to her parents' home in New Hampshire for at least a visit and perhaps to stay. The home was the family's summer place when Frankie was growing up, and her parents have made it their full-time residence in their retirement.  As Frankie arrives on the scene, so does an arsonist who's intent on destroying homes belonging to summer people.

Miller's gift is in her expression of the feelings and motivations of her characters.  They are wholly self-aware and don't shy away from sentiments that are unflattering.  The circumstances in which they find themselves make their introspection seem natural and appropriate rather than mere navel-gazing.

As Frankie returns to life in the United States, she is thrown into a world  of supermarkets and Fourth of July parties in which everything seems easy by comparison to life in Africa.  After making cocktail conversation about  her work in Africa, she tells the reader, "And when she spoke of her work, of the children--of the dying, or even of the rescued--they had trouble listening. 'I don't know how you do it," they'd say, and Frankie thought she could hear in this the wish not to have to listen to any of the details, not to have to imagine it. But after all why should they?  How much had she ever asked to understand what might be difficult in their lives?"  I like the fact that Frankie doesn't become irritated that people don't have the energy--or interest--to spend on the issues that have shaped her existence.  Instead, she recognizes that everybody is absorbed in their own lives, their own worlds, and that she too has failed to extend herself beyond her own passions.  As the story develops, we learn that the people whose difficulties Frankie hasn't taken the time to understand include her family, especially her aging parents.

We share Frankie's life as she struggles to figure out what her next step should be.  While she's found great satisfaction in the work, she realizes that it creates an environment that lends itself to transient relationships. "The work itself was part of what .... ended [relationships].  But it also began them.  The extremity of it, the absorption in it, the fatigue, the high.  The charge that passed among people laboring together in such hard circumstances, such challenging ones.  The wish to take pleasure where you could, the sense that you needed it, that you had somehow earned it.  Most of the people Frankie worked with felt this way.  They joked about it, actually, they used it as a kind of aphrodisiac." Perhaps, though, she's ready for a more lasting connection.

Along the way, Frankie meets Bud, a political correspondent who chucked it all to buy a small town weekly. Bud is a wonderful character who has a true commitment to the small community in which he is creating a home for himself.  Frankie shares herself and her feelings with Bud.  She acknowledges that she has derived a "sneaky pleasure" from being the cool committed aid relief worker and that she's not sure she wants to give that up.

Bud accepts Frankie's feelings for the honest emotions that they are.  After all, he has his own "sneaky pleasure."  He is a bit excited--from a journalistic perspective--about the fires.  Bud admits to Frankie that, "When I first realized that the fires were likely arson, I was happy."  "Happy? Why?"  "Why not?  I yam what a yam, a newspaper guy, and it's a good story.  I've had other papers picking it up from the AP, the stuff I'm doing right now, and the worse it gets, the longer it lasts, the more that kind of stuff will happen.  If it gets really bad, some prize committee may sit up and take notice."  Again, Miller's characters aren't afraid to talk about feelings one wouldn't typically share with others (assuming they were honest enough to admit them to themselves).

And so it goes throughout the book.  Each of the primary characters--Frankie, Bud and Frankie's mother Sylvia--is at a juncture in his or her life that coincides with--and has some connection to--the fires. And, as is often the case in real life, their stories end and their issues resolve (along with the question of the identity of the arsonist) without being wrapped up in a neat little package.

I love Miller's writing, not only her willingness to acknowledge the complicated emotions of adult life, but also her ability to tell a good story.  Having read her last four novels, I'm looking forward to reading her earlier work.  Perhaps I'll even return to where it all started, with The Good Mother.  So many good authors to read, so little time.