There's no doubt that WorldFest 2014 had some of the most creative and beautiful theater that I've had the pleasure to see.  Case in point:  Poetry Butterfly brought to us by the Latvian Drawing Theater.  I knew going in that the piece incorporated dancing, live music and art, but I had no idea what that would actually translate into.

As the show opened, Elina was sitting on the floor behind a large book that covered her body and face.  Her feet began to dance with the music created by Rihards on his elaborate set-up that included a synthesizer, different types of drums, chimes, a xylophone and probably some other instruments that I missed.  (The music was amazing.)  Soon her arms came to life and then her body as she danced across the floor with a paper butterfly that emerged from her book. 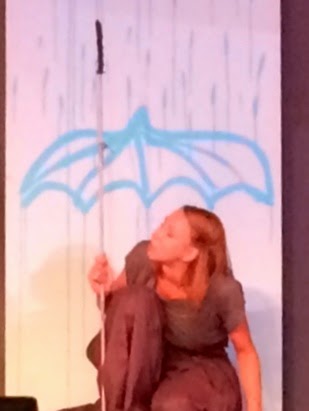 The stage had five panels of differing colors that she began to paint on with a large wand.  The pictures were whimsical -- a book, a girl, a flower.  At one point she painted rain and this umbrella and took shelter under it.  It was so charming.  Then I realized that the paintings were vanishing before our eyes, much like when you shake an etch-a-sketch.  I have absolutely no idea how that worked, but it enabled Elina to re-use the canvases to create more images to advance the story.

After the rain dried up, the sun came out, and she made shadow puppets on a canvas using her hands and the stage light.  Rihards set his synthesizer on the equivalent of autopilot and came out to join the fun.  The butterfly atop the stage began undulating as it flapped its wings.  It was a wonderful performance.

I have to admit to wondering if the afternoon's performances would hold up to the morning of theater that I had seen.  They did.

The Mouse's Daughter's Wedding from the Henan Qu Opera Troupe was a light-hearted musical performed in Chinese opera style -- in Mandarin.  Any apprehension I had about the language (or, let's face it, opera) was immediately alleviated when four elaborately costumed mice pranced onto the stage in the opening scene.  The audience laughed and immediately got into the story, which was taken from a traditional folk tale.

It was time for the beautiful mouse daughter to marry, and a series of suitors came to call.  The daughter fell in love with one after the other in dramatic fashion, dancing the Argentinian tango with one beau and swooning to a Celine Dion song with another.  Her hopes were dashed in each case, though, when her mother decided that the suitor did not have enough to offer the family.  Eventually, along came a cat bearing gold chains and riches.  The mother was blinded by his wealth, and the wedding was set.  Happily, the cat's dubious character was revealed before vows were exchanged, and the daughter was free to marry the mouse of her dreams.

The performance was funny and charming, the music was great, and the costumes and make-up were extraordinary.  It was a wonderful introduction to Chinese opera.

The final show of the Festival was The Servant of Two Masters by Australia's Lieder Theater Company.  Just thinking about the show makes me laugh.   The inspiration was an 18th century Italian comedy in which our "faithful" Truffaldino figures out a way to serve two masters--and earn two salaries--at once. As the program promised, hijinks abound, and the audience was practically rolling in the aisles.

Although every actor in this large troupe is comedically gifted, Josh Waters' performance as Truffaldino was truly inspired.  Both his physical humor and his timing were great.  (And I'll never forget the bit with the vegemite sandwich.)  I don't know if Amanda Aitken's's resemblance to comedienne Kathy Griffin was intentionally played up with the pink wig, but I kept coming back to the thought whenever she was onstage.  The Servant of Two Masters was a brilliant note on which to end the Festival.

All in all, WorldFest 2014 was a fabulous celebration of theater with lots of laughs -- and a few tears -- along the way.  Every day was punctuated with moments that surprised me and made me shake my head in wonder at the creativity and talent of the people onstage.  It was a reminder of why I love live theater so much.

It was announced at the closing ceremonies that Venice Theatre will once again host WorldFest in 2018.  I will be the first one ponied up at the ticket counter when the box office opens.
at June 23, 2014