Witness: Art & Civil Rights in the Sixties at the Brooklyn Museum

I knew I was in for a special experience the moment I walked into the first gallery of "Witness:  Art and Civil Rights in the Sixties" at the Brooklyn Museum of Art.  Music was playing -- first the African-American spiritual "Go Tell It On the Mountain," then Sly and Family Stone with "Everyday People", then Bob Dylan with "The Times They Are A-Changin',"  (A later gallery was dedicated to a video performance by Nina Simone.)  It set the tone for a special exhibit on the 50th anniversary of the passage of the Civil Rights Act.

The exhibit contained a wide variety of works in a variety of media.  Here are some of the ones that spoke to me the loudest.

Not surprisingly, there were a number of works that referenced the Ku Klux Klan.  Bruce Davidson was a civil rights photographer who was awarded a Guggenheim Fellowship to pursue his craft.  His pictures captured images from marches in Selma to protests in Harlem to this Ku Klux Klan rally in Atlanta.  He learned about this rally when he picked up a flyer in the streets of Atlanta.

My initial instinct was to smile when I saw this work by Philip Guston.  The colors are happy and at first blush I didn't see the Klansmen on their merry way.  (An article in ArtNews Magazine entitled "14 Artworks that Prove Pink is Tough" included "City Limits.") The cartoon-like feel makes the Klansmen all the more dangerous.

Noah Purifoy's assemblage sculpture called "Untitled (Standing Figure)" didn't strike me until I read that it was made from detritus found on the streets after the six day uprising in the Watts section of Los Angeles.  This sculpture recently sold for $62,500 at the Swann Galleries auction featuring the works of African-American artists of the 1960s and 1970s.  The auction was titled "The Shape of Things to Come."  (Apparently the Brooklyn Museum isn't the only arts organization working the civil rights theme.)


Norman Rockwell made an appearance in the show with his "New Kids in the Neighborhood (Negro in the Suburbs)."  This illustration was created in 1967, four years after Rockwell left his job of 47 years at The Saturday Evening Post because the magazine would not print his work that pushed societal hot buttons.  (The work was published in Look magazine, where Rockwell made his home after leaving the Post.) There is a sweetness in the natural curiosity between these two sets of children -- alike in so many ways yet differentiated by the color of their skin.  The work leaves the viewer with a sense of hope that they might actually end up playing together after school. 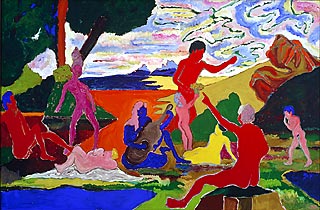 "Homage to Nina Simone" by Bob Thompson was a burst of excitement with its bright color and sense of movement.  His work is a tribute both to Simone and her music and to the work of 17th c. Nicholas Poussin's "Bacchanale -- The Adrians."  Simone is represented by the fuschia figure to the left of the guitar player.  Her "natural Afro" was apparently recognized as a cultural symbol in the African-American community.

The exhibit, which runs through July 13, is interesting and thought-provoking, and I wish I could go back for another visit.  Shows like "Witness" and Ai Wei Wei's "According to What?" have made the Brooklyn Museum of Art my "go to" museum when I'm in New York.  Check it out the next time you're in the City.
at June 15, 2014