Where in the World is the Symphony?

There is often a big difference between hearing about an education program and seeing its results first hand.  When I first met Raffaele Ponti, he spoke with great enthusiasm about the programs for school kids that he had introduced at the Paducah Symphony Orchestra and his hopes to bring the same programs to our community.  In his first year at the helm, he has done just that.

In the CSO's "Musical Chairs" program, fledgling musicians were invited to attend CSO rehearsals where they sat onstage next to a musician who plays their instrument.   It was a great opportunity for kids to hear live musicians play and to get a behind-the-scenes look at what goes into an orchestral performance. By its nature, however, the reach of such a program is fairly circumscribed.

Not so with the Maestro's "Where in the World is the Symphony?" program.  Over the course of the school year, Maestro Ponti visited third graders across Charlotte County, nearly 1600 in all.  Using Stravinsky's Firebird and Beethoven's Fifth as the heart of his lesson plan, the Maestro introduced the kids to classical music, inviting them to create art work while listening to the music.

The program culminated with two concerts given by a scaled down CSO at the Charlotte Performing Arts Center. I wrangled an invitation to the second performance, and it was a blast.

The kids were visibly excited while waiting for the concert to start.  They settled down right away, though, once the Maestro picked up his baton.  I was struck by the fact that Maestro Ponti treated the kids much as he would any other audience.  Sure, the CSO's adult audience doesn't get a demonstration of what the various instruments sound like (something I greatly appreciated!), but he didn't talk down to them and the repertoire included music that any audience would enjoy.   And I loved the Maestro's introduction of the musicians as "Your Charlotte Symphony Orchestra," instilling in the students that same sense of pride that CSO regulars feel.

The music was wonderful from start to finish, and the kids were fully engaged.  In fact, passersby  might have thought there was a rock concert going on in the building given the amount of cheering that went on.  The CSO's "world tour" started in outer space with some John Williams' music from Star Wars. The CSO then took us to France with music from Carmen and to Russia with the now familiar Firebird and some excerpts from Tchaikovsky's Nutcracker.  (The music from the Chinese dance induced some giggles.)   Then we found ourselves back in the United States with Aaron Copland's Hoedown and a new composition entitled Latin Satin by Barbara Goldberg (the orchestration for which was done by CSO's George Mancini).  Goldberg was in the house, and the kids seemed to appreciate how special that was.  After a reprise of Beethoven's Fifth, the concert closed with John Philip Sousa's Hands Across the Sea. Throughout the concert, the kids clapped and played the drums on their legs and generally showed an exuberance that has been weaned out of adult audiences. 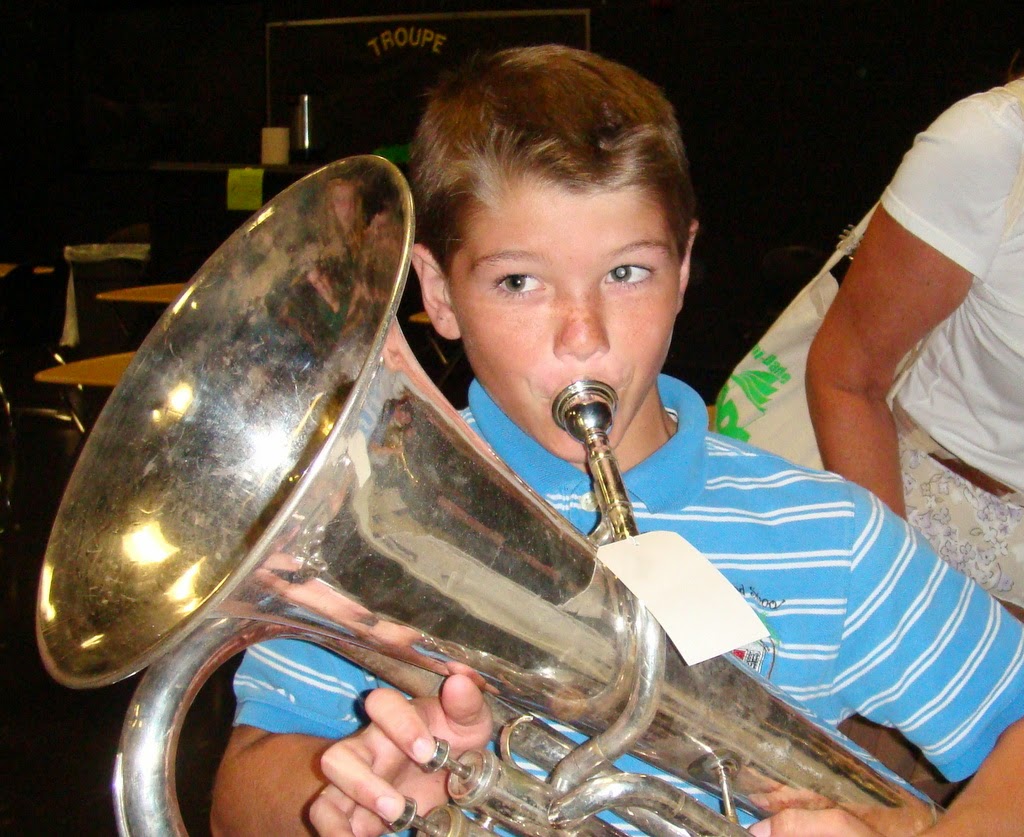 The private school kids had the chance to visit the "instrument petting zoo" after the concert.  (Bus schedules did not permit the public school students to participate.)  "Zoo" is the operative word here.  The kids were game to try all sorts of instruments, from the piano to bongo drums to the tuba.  It was cacophonous and lots of fun.

Once the kids were on their way back to school, I had the chance to talk with Raffaele and concertmaster Stewart Kitts. Raffaele had introduced Beethoven's Fifth by having the kids chant "dot, dot, dot, line" to get the rhythm.   Stewart told us that during WWII, the British used the Morse code version -- dot, dot, dot, dash -- as a "V" for "Victory."  This seemed the perfect tidbit on which to close a day that was a victory in every way for the CSO and Charlotte County's third graders.  The only thing that could have been better is if every supporter of the CSO's education programs had magically been able to see the impact the Maestro and the CSO made on these kids.  It's hard to imagine a better way to create the audience of the future.