Bringing Back the Oysters

I recently had the opportunity to write an article for Florida Weekly about the Oyster Habitat Creation Project that is in process in Punta Gorda.  My friend Dorrit got the ball rolling on the story.  She had heard about the project and promptly got involved.  After spending a morning making oyster mats, Dorrit was pumped up and asked me if Florida Weekly ever covered environmental stories.  One thing led to another, and I found myself with a new assignment.

I have to admit that I was a bit nervous about writing a "hard news" story.  Any concerns about the topic being inaccessible were alleviated after I spent the morning with Kate Aug, volunteer outreach coordinator for the project.  Kate is so enthusiastic about the project and fun to be around that doing my research was a blast.  I even made my own oyster mat!  (Talking about the science behind the project with Anne Birch from The Nature Conservancy was a bit tougher and made my head kind of want to explode.  I ultimately realized that the story didn't actually need technical details to serve its purpose of raising awareness about the project.)

I'm thankful to my editor Kathy Grey for letting me spread my wings a bit and write about the project.   If this sounds interesting, read on.... 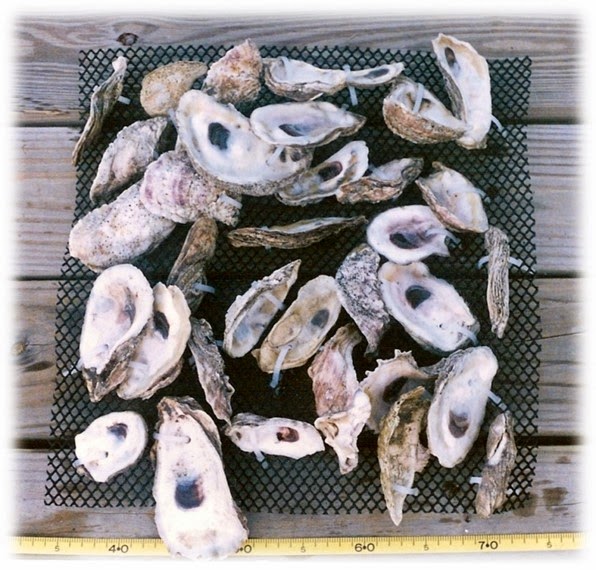 Bringing Back the Oysters
By Nanette Crist, Florida Weekly Correspondent

Sometimes nature needs a little nurturing of its own. That’s just what The Nature Conservancy, working in collaboration with the Department of Environmental Protection and the City of Punta Gorda, is doing with its Oyster Habitat Creation Project.

The power of the oyster

When most people think about oysters, they envision pulling up to a table to enjoy a dozen on the half shell. But the positive impact of oysters extends far beyond our palates. In fact, oysters provide a veritable smorgasbord of environmental benefits.

Oyster reefs help stabilize our coastlines by slowing down wind, water and waves coming off the water. They clean and clarify the waters around them. They combat erosion by providing backfill and creating favorable conditions for mangrove growth. And they serve as a habitat for up to 140 species of animal life.

Global trends aside, Charlotte Harbor continues to provide a hospitable environment for oysters.  As a result, when The Nature Conservancy began to develop an oyster habitat creation plan for Southwest Florida, Charlotte Harbor was the natural choice of site.

After extensive research, an area off Harborwalk East in Punta Gorda was identified as the prime location on Charlotte Harbor to host a pilot program. Water quality and salinity fall well within the desired ranges. Water depth facilitates easy access. And, as local boat owners can attest, oysters are already in Punta Gorda in abundance. The missing element is a large stable foundation to which oysters can attach themselves to establish a reef.

Joan LeBeau, Punta Gorda City Planner, is delighted that Punta Gorda has been tapped to be home to this project. “Charlotte Harbor is the economic engine of Charlotte County,” Ms. LeBeau said. “So it’s crucial that we protect that asset.” Ms. LeBeau further commented that the specific location of the reefs will dovetail nicely with the City’s desire to protect its investment in the Harborwalk infrastructure.

If you build it, they will come

That’s when the excitement starts. During oyster mating season, oyster larvae (known as “spat”) will attach themselves to the new reefs. As the oysters mature and grow, so will the reefs.

With many environmental projects, a long lead time exists before any discernible change occurs. Not so with the Oyster Habitat Creation Project. Progress should be visible within six months of deployment of the reef materials.

The term “visible” is quite apt, as Punta Gorda residents will literally be able to witness the growth of the reefs. Anne Birch from The Nature Conservancy explained. “The reefs will be located in an intertidal habitat, meaning that they will be submerged at high tide and exposed at low tide. This will permit local residents to watch the reefs they helped build grow over time.”

In a bonus component of the project, the Florida Fish & Wildlife Commission will track usage of the reef area by small tooth sawfish. Charlotte Harbor is a “hot spot” for this endangered species. It is anticipated that the sawfish will utilize the reefs as a place to feed and take shelter.

As simple as this might sound, the logistics of the project are daunting. Katherine Aug of the Department of Environment Protection is the volunteer outreach coordinator for the project, and she is on the hunt for helpers. “A total of 1,500 oyster mats have to be made for the three reefs,” Ms. Aug said. “Each mat has 36 oysters shells tied to it with zip ties, which means that holes have to be drilled into 54,000 oyster shells. In addition, 2000 bags will have to be filled with fossilized shells.” She continued by saying with a smile, “You’ve probably heard the expression ‘It takes a village.’ This project takes an army.”

The good news for Ms. Aug is that Punta Gorda is a community known for rolling up its sleeves to help. Ms. Aug welcomes volunteers to her site at Charlotte Harbor Aquatic Preserves on Burnt Store Road on Tuesdays and Wednesdays. Snowbird Collette Niermann has become a regular, spending hours there putting together mats and drilling shells. “I can golf anywhere,” Ms. Niermann said. “This is a unique opportunity to help preserve our beautiful environment.”

Punta Gorda resident Dorrit Tompkins is similarly enthusiastic. As soon as she heard about the project, she headed down to Ms. Aug’s site. “It’s really easy to make an oyster mat,” Ms. Tompkins said. “And Kate [Ms. Aug] is engaging and knowledgeable, which made my morning there lots of fun.”

Ms. Aug is also ready, willing and able to bring her mat making materials to local churches and clubs to facilitate participation by their volunteers. All that is required is an outdoor area with tables and chairs. “It takes 20-30 minutes to make a mat,” Ms. Aug said. “So 20 volunteers can knock out a good number of much-needed mats over a two hour period.”

The timing could not have been more perfect. Next up on the class' syllabus is a segment on the impact mankind has had on the world’s oceans. The report is gloomy given factors such as climate change and oil spills. Ms. Stice enjoyed giving her students the chance to make their own positive impact on the environment before they began discussing the damage that’s been done.

Students Miranda Smith and Matthew Foley came away inspired. "We've been talking about ecosystem conservation and preservation all year,” Ms. Smith said. “It was great to have a hands-on opportunity to do my part."

Mr. Foley concurred, commenting that, "It's nice to be able to actually 'do" some science that will help the world instead of just learning about it in the abstract." He particularly enjoyed working on a project that will take have an impact in the near future, not 100 years from now.

The entire community will have a chance to learn more about the Oyster Habitat Creation Project, and coastal resilience more generally, on Saturday, April 26, at the Charlotte Harbor Coastal Awareness Day. The event will be held from 10-3 at Laishley Park in Punta Gorda.  John Davis of WGCU will host a panel discussion from 11-12 on the topic “Nature Can Help!” Attendees will also have the chance to find out for themselves how easy it is to make an oyster mat.

The ultimate purpose of any pilot project is to learn how a larger scale project might work. Over the two year period following creation of the reefs in Punta Gorda, The Nature Conservancy will monitor their development to determine which of the three types of reef material is best suited for Charlotte Harbor. The eventual goal is to establish reefs over 20 acres of habitat. It would be the first estuary-wide oyster restoration program in Florida. And it all happens one oyster at a time.