When I first moved to Punta Gorda, the idea of a Christmas light canal tour or a lighted boat parade was incredibly exotic, and I looked forward to the experience with the anticipation of a child waiting for Santa Claus. As the years have passed, the events have lost some of their novelty, but it's still always fun to see the extent that people will go to to light up the night.   So when I received an invite to go on a King Fisher Fleet canal tour to see the lights, I jumped at the opportunity.  Watching people's delight as they discovered holiday decorations that can only be seen from the water made me appreciate the tradition anew.

We took off from the dock at Fisherman's Village (affectionately known as "Fishville") in time to catch an amazing sunset.  Kathy Burnam, marketing director for Fishville, was on board the boat and talked enthusiastically about how successful the lighting of the Village for Christmas was this year.  (Over a million lights are put up for the holidays, so there's quite an impact when the switch is flipped.)  By her estimate, more than 5000 people were on hand at some point during the evening to listen to carolers and enjoy the other festivities -- and of course to get in a bit of holiday shopping.

As we made our way up and down the canals, we saw differing levels of decorations.  Most people have at least a string of lights across their dock (something that I need to get on sooner rather than later lest I be accused of being a scrooge).   Some people have traditional decorations, like angels singing on high or a sled with reindeer.  Others go for a bit of humor, like the house that has Santa's BVDs hanging out to dry.  Still others throw subtlety to the wind (or should I say to the tropical breezes?)  Regardless of which tack the homeowners take, the level of participation shows how much Punta Gorda's residents enjoy being a part of this community and its traditions. 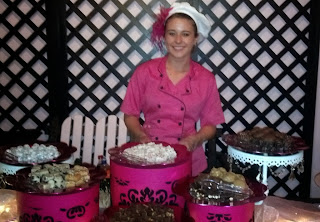 We ended the night on a high -- a sugar high, that is. Simply Sweet (located at the entrance to Fishville) hosted the group for the most amazing spread of sweets I've ever seen.  Our first stop was a table of baked treats -- from sugar cookie bars topped with swirls of pink frosting to mini "death by chocolate" cupcakes.  (I don't know if they call them that, but they should!)  From there we went on to a chocolate bar (only part of which is shown here). I tried to show some discretion and walked away with just one cookie and a piece of peppermint bark.  My willpower dissolved, though, when the girls brought around trays of Norman Love chocolates.  (If you've never seen these hand-painted chocolates, it's hard to imagine how truly beautiful they are.)  Okay, I thought to myself, three little desserts isn't so bad.  Then the tiny martini glasses with chocolate gelato came around.  Really, I didn't want to be rude, so I gave that a try as well.  I would be hard pressed to say which of the treats was the most delicious.  Luckily, I didn't have to choose!

All in all, it was a great way to get into the holiday spirit.  Now if I can just figure out where I put the boxes with my decorations.....