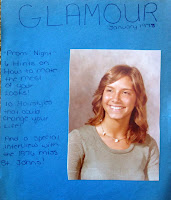 There are times it pays to be a pack rat.  A few months back, I opened a box marked "Crist Crap" that has been making the various moves with me for the last 15 or so years.  There was a lot of hilarious stuff in the box -- primarily of high school vintage -- and most of it was looked at, enjoyed, and put in the recycle bin.  I came across a mocked up copy of Glamour magazine that my sister made for me (circa 1978) that featured me as the cover girl.  (As you can see by the picture, that was definitely not going to happen in the real world.)  With the family pictures, hilarious articles ("6 Hints to make the MOST of your looks" and "10 hairstyles that could change your life!"), and funny ads (the new polaroid camera -- color pictures in only 60 seconds!), this was a keeper.

Fast forward 35 years to current day.  As anyone knows who reads this blog, I love living in Punta Gorda and have gotten very involved in the community.  And so, when an email hit my inbox asking for volunteers to be interviewed about life in Punta Gorda for Where to Retire magazine, I raised my hand as I am wont to do.  I was excited when I was chosen and had a fun time talking with writer Kathy Straach about what it's like to live in this part of the world.   Straach took a couple of pictures of me for the article and that was that.  This all happened during the summer, and with the article not coming out until 2014, I pretty much forgot about it.

A couple of months later, I got a call from the magazine.  Would I be interested in doing a photo shoot for possible use as the cover?  Yikes!  Really????  Obviously, this was a once-in-a-lifetime opportunity, so I took a big gulp and said yes.

After much concern about what to wear and how to make myself camera ready, I met photographer Chip Litherland at the Tiki Bar.  I was thrilled that it was a cool day because I was -- hmm, how to say this nicely  -- sweating like a pig because I was so nervous.  I had made the mistake of googling Chip and found out that he's the real deal with his work for ESPN Magazine, Sports Illustrated, the NY Times, etc., etc., which made me even more worried that he was going to take one look at his "model" and wonder what in the world he had gotten himself into.   Happily, in addition to being a good photographer, he's also a nice guy -- very low key and easy to be around, which is a definite plus when there's a monster lens in your face. 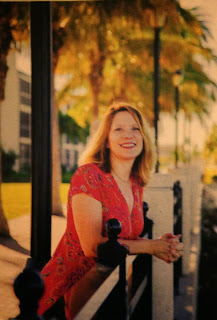 We took some shots at the Tiki Bar and went into town to get some pictures with some flavor of the downtown area.  There's a great clock on Marion Avenue, and he was about to take a couple of pictures there when he said, "Never mind -- they'll never use these.  Clocks will remind people of time, which reminds people of aging, and you know what happens next."  Laughing, we headed off for a few more shots elsewhere.

Then it was back to the waiting game.  I wasn't allowed to see any of the shots that were taken, nor would the magazine tell me if I would be the cover girl.   (Yes, I know. Can you really call a 52 year old on Where to Retire magazine a cover "girl"????)     I am excited to report, though, that the January-February 2014 edition is now on newsstands across the country (and in the 200,000 mailboxes of the magazine's subscribers) and that I did in fact make the cover. If you'd like to read the article, click here:   https://drive.google.com/file/d/0B9ltElQD7mRBdExaVmk5VVZlb0k/edit?usp=sharing

I feel so fortunate to have landed in Punta Gorda, and I'm thrilled to have had the opportunity to share my enthusiasm.   Best wishes to all as we head into the new year.  May all your dreams -- retirement and otherwise -- come true!