From the opening scene of David Marguiles' Collected Stories, I was along for the ride.  The audience meets writer and professor Ruth Steiner (played by the fabulous Sara Morsey) as she pries open the window of her Greenwich Village walk-up apartment to throw the keys to the front door down to a student who's come for a tutorial.  It was classic New York, and I loved it. 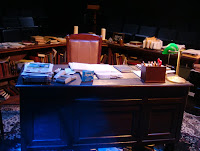 Once student Lisa Morrison (played by Deanna Gibson) makes her way up to Ruth's apartment, I was a fly on the wall of the complicated relationship between Ruth and Lisa that is, depending upon the moment, that of professor-student, mother-daughter (a bit of transference for sure), fellow writers, and friends.  Lisa is understandably nervous in her first meeting with the famous writer, and ends every sentence with the upward inflection of a question.  Ruth points this out, telling Lisa that it makes her sound dopey and commenting that this trait is a" poignant begging of acceptance by women that makes people take them less seriously."  This was the first of several occasions when I had to consciously resist the urge to participate in the conversation.  My friend Andrea and I have a joke about this very thing -- my/our tendency to say "excuse me????" in a high pitched little voice when trying to get a waitperson's attention.  The intimacy of Florida Rep's ArtStage Studio Theater (which is in the round and seats a maximum of 120) breaks down the barrier between the actors and the audience and truly makes you feel one with the show. 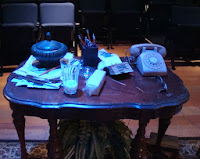 Marguiles' dialogue is wonderful, and there were many takeaways in the play for anyone involved in the creative process.  When Ruth critiques Lisa's story (the aptly named "Eating Between Meals" about her struggle with bulimia), she tells Lisa that it is up to her to decide which of her comments are constructive criticism and which are just noise.  She notes that she's not a doctor, just one person giving feedback on what she sees.  When Lisa's career starts to take off, Ruth commiserates with her simultaneous feelings of excitement and fear that she will never replicate the work that has been so well-received.  "Recognition is a terrible shock," she says.  "You need to view it as purely an economic development.  You still have to do the work."  And on the subject of writing, she shares that it's like "rummaging at a tag sale and picking through your neighbors' garbage."  (In case you're wondering, yes, I was actually scribbling some of the dialogue in the dark.  The guy sitting next to me might have thought it was odd if he hadn't been leaning forward so intently to take in every word.)

I don't want to say more about the story because the show is running through December 7th, and it really is a not-to-be-missed performance.  Note that I am showing great restraint here; the play has such substance that I could go on and on.  I would, however, like to lavish some praise on the actresses, who play their parts to perfection.

Last season Sara Morsey portrayed the alcoholic aunt in Other Desert Cities on Florida Rep's main stage.  She was terrific with her wild flowing hair and her candid observations.  In Collected Stories her character also calls it like she sees it, but her candor comes from an entirely different place.   Ruth spends entirely too much time alone--writing, reflecting--and seems a bit surprised by her friendship with Lisa (and a bit out of practice at the give-and-take that's involved in any relationship).   I enjoyed Morsey in both roles immensely and would go to a production that wouldn't otherwise be on my list just to see her perform.  The young Deanna Gibson also did a wonderful job.  She captured the essence of Lisa--a young woman who grows from an insecure student to an accomplished writer during the course of the show.   There's a price to be paid for her success, though, and her conflict is persuasively played out on stage.

I know that time is short and calendars are full, but if you have a chance to get to Collected Stories in the next few days, your effort will be well worth it.  Next up at Florida Rep's ArtStage Theater is David Sedaris' Santaland Diaries, which tells the story of a down-and-out writer who takes a job as an elf at Macys during the holiday season.  I'll be taking my parents to this "for mature elves only" play during their post-Christmas visit.  Maybe I'll see you there!
at December 03, 2013