The holidays, while fun, can be a bit hectic as you rush from party to party in-between frantically looking for the perfect gifts for your loved ones.  (Thank goodness for the internet!)   So it was a treat to sit back and enjoy two hours of music compliments of the Charlotte Chorale.

The concert was aptly called "A Christmas Odyssey" as the Chorale took the audience on a tour of holiday music from around the world.  (In a funny prelude, the obligatory "please silence your cell phones" message before the concert began was given in several languages.)   The program notes--written by artistic director Bill Dederer and his wife Julie--were terrific with their insight into the history of the songs.  I learned, for instance, that Wolcum Yole (from A Ceremony of Carols) was written by Benjamin Britten in 1942 while on board the Axel A Johnson in the middle of the North Atlantic Ocean hiding from German U-Boats.   And did you know that carols were originally dances rather than songs?  Prior to the Renaissance, the church was opposed to dancing.  (This stricture continues today in some fundamental Southern Baptist congregations.  I still remember the trauma one of my high school friends experienced over her boyfriend being forbidden to take her to the Christmas Ball.  After all, you know where dancing can lead! But I digress....)  Lyrics began to be composed for the tunes so that the music would not be lost.  Deck the Halls is an example of a composition that was originally a Welsh dance tune that was converted into a song.   The use of the phrase "follow me in merry measure" is an explicit reference to the tune's prior life as a folk dance as the word "measure" is a synonym for dance. 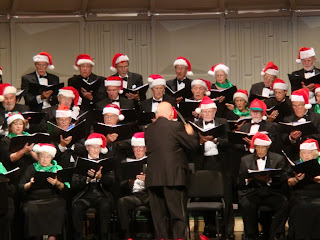 Throughout the concert, the singers were accompanied by Dolores Smith on piano, and she was a true professional.    The Chorale was intermittently joined by instrumentalists on flute, percussion, acoustic guitar and, of course, the horse whip. (I particularly enjoyed the guitar and flute in the rendition of Silent Night.)  Lemon Bay Brass from the local high school also performed before the concert and joined the Chorale during the second half of the show.

Having never been to a Chorale concert before, I can't compare this performance--the first under the direction of Bill Dederer--to shows of prior years.  I can, however, say that the 700+ audience members seemed to have a great time and that smiles and holiday cheer abounded as patrons made their way home.  That counts as a strong start to the Chorale's 25th season to me.

The Chorale will perform two additional concerts this season, An Elixir of Love on Saturday, February 15th, and Music from the Stage on Saturday, April 5th.   Perhaps I'll see you there!
at December 15, 2013