The School for Lies presented by the FSU/Asolo Conservatory Theater 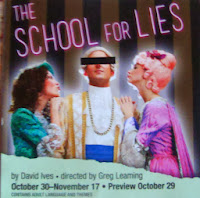 Last year Dorrit and I were Asolo Repertory Theatre groupies of a sort. After I happened to answer a phone call soliciting a donation for the Theatre's education program, I became an Asolo "angel" (with little tiny baby wings).  Dorrit and I took advantage of the opportunity to participate in cool events like a group tour of the Koski Production Center, a private backstage tour of the theater, and brunch with two costume designers.  We had a chance to chat with lots of Asolo insiders and learned a bit about the FSU/Asolo Conservatory for Actor Training. More than 1200 students audition each year for 12 slots in the three year program. Given that the Conservatory has been named one of the top ten acting programs in the country, this doesn't come as a surprise.  We thought it would be fun to get season tickets to the four productions that the second year Conservatory students will put on this year.    We saw the first show of the season this week-end -- The School of Lies by David Ives -- and it was terrific.

I have to admit that I wasn't really looking forward to the performance.  I knew that the play is adapted from Moliere's The Misanthrope, and I had decided that it was going to be dark and somewhat grim.  (Of course, I haven't actually read The Misanthrope--or any Moliere for that matter--so this was a totally uneducated reaction.  A quick look at Wikipedia would have told me that Moliere is known as a comic genius and  altered my expectations. )  And I totally missed the fact that the play was written by David Ives, who also wrote the fabulous Venus in Fur that skyrocketed to the top of my list of favorite plays last year.   Short story long, my preconceived notions couldn't have been farther from the truth.

The School of Lies is written in rhyming verse, much like a Shakespearean play.   Like any Shakespeare I've ever seen, it took me a few minutes to get into the flow.  Once I did, however, it didn't take long to appreciate the incredibly funny and clever script.  Despite the old style form (and Victorian costumes), the language in the play is entirely modern -- one particularly memorable scene features Celimene doing both rap and a Valley girl imitation.   The actual plot--though amusing--was secondary.   The show was really about the words themselves and, for us, getting a chance to see the young actors, who did a truly incredible job.

Fortuitously, there was a talk back after the show with all of the actors.  It was fascinating to hear a bit about the Conservatory and the process of putting this production together.   We learned that it is actually easier for actors to memorize rhyming verse than prose, although it's hard to believe that there was anything easy about memorizing that script.  Rehearsals began a mere five weeks before opening night, and the actors were "off book" after about a week, which enabled them to work on the flow of the show.  With nine actors and constant comings and going onstage, they said this was a huge help.

While the actors have auditioned for their parts in the remaining shows of the season, they did not do so for their roles in The School for Lies.  Instead, casting decisions were made over the summer based on the strengths they'd shown during their first year at the Conservatory.  This timing was necessary in order for there to be sufficient time for the costumes to be created.  The students themselves, however, didn't learn which parts they'd been given until the week before rehearsals started.  Interesting.  When asked about the rationale for this approach, they ventured a guess that the powers that be didn't want their auditions to be affected by those decisions.  They collectively expressed the opinion that they were mature enough not to be impacted by the casting for the season opener -- after all, disappointment is a big part of the life of an actor -- but the approach makes some sense to me.

The students talked about how the show required an ensemble effort and how comfortable they've grown working with each other.   One actor made the comparison to a well-oiled machine, and it was quite apt.  (As an aside, I spoke separately with Olivia Williamson after the talk-back.  She looked so familiar to me that I had to figure out if I'd seen her in something else. It turns out that she played the daughter in the show Painting Churches that I saw at Banyan Theater this summer.  She commented that her experiences with the two productions could not have been more different.  In The School for Lies, she felt totally comfortable and confident because of her relationship with her fellow actors.  In Painting Churches, she portrayed the daughter of a couple who are married in real life and felt like she was playing catch up the whole time.)

I am so looking forward to the rest of the season and wish I didn't have to wait until January to see the next production.  The idea was that we would watch the actors grow over the four play series. If the quality of their performances in The School for Lies is the baseline, we are in for some great theater.  And did I mention that tickets are less than $30 per show?  If I were a bit more clever, I would close with a rhyming couplet a la David Ives.  Instead, just consider yourself nudged to check out the Conservatory's performances yourself.
at November 05, 2013