I was never a child who dressed up in my mother's clothes, clomping around in too big high heels and draping myself with costume jewelry.  Nor has dressing up for Halloween ever been my strong point.  In fact, I have always been a bit in awe of people who come up with a clever idea for a costume. I still remember a Halloween party back in the 1980s when my friend Paul dressed up as Julia Child, complete with a rubber chicken.  It was hilarious.  I dressed up as a sewing kit.  My costume:  a sweater with a zipper down the front and a tape measure thrown around my neck.  So I'm sure you won't be surprised to hear that it's the exception, rather than the rule, for me to go to an event where costumes are involved.  Nonetheless, last week-end I found myself at the Edison Pops concert--this year a Rat Pack tribute--despite the fact that attendees are encouraged to decorate their tables (and themselves) in keeping with the evening's entertainment.

Just to be clear, my lack of imagination extends beyond dressing myself to dressing the table.  And so I was duly impressed when I arrived at the event to find our tables festooned with all sorts of "rat pack" paraphernalia.  Mary and Vicki had searched high and low to find little stuffed rats to represent Frank Sinatra, Sammy Davis, Jr., Dean Martin, and other members of the pack.  The cigarettes (compliments of the Party Store) were a particularly nice touch.  And of course you'll notice that Mary took the time to fold our napkins like tux jackets and tie them up with bow ties.  Mary also brought white frosted cookies with black bow ties  In for a penny, in for a pound (literally, in this case).

The piece de resistance, though, was the group's attire.  When Diana came up behind me and said, "Hello, doll," it took me more than a couple of beats to figure out who she was.  Again, the cigarettes put the costumes over the top. Bruce looked like a photojournalist back from the wars with his tripod, camera, loosened tie, and beleaguered look.  And any of Sinatra's gangster buddies would have been happy to have Dorrit on their arm.  (For the record, the women at our table were asked to wear red to complement the men's black and white attire.  I went all out, wearing a red t-shirt and black shorts.  I was happy when the sun set and people could no longer see how lame I looked.) 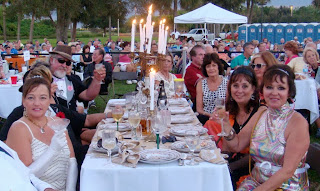 I was truly shocked that our table didn't win the award for best theme.  I attribute our loss to the fact that our well-dressed diners were out roaming the grounds when the judges came along.  Less surprising is the fact that this candelabra adorned table with tiara-wearing women won the prize for most outrageous decoration.  Really, where do people get these ideas, not to mention the clothes???

The evening was great fun, with the Ultimate Rack Pack--comprised of Bill Stabile as Sinatra, Steve Roman as Davis, and William Cintron as Martin--putting on a good show.  The audience particularly liked the danceable songs like "Everybody's Twistin'."  (Not one of Sinatra's biggies, but I checked, and it is on his list of recorded songs.)

In case you're curious, the term "Rat Pack" was coined in the 1950s to refer to a group of actors of which Humphrey Bogart was the leader.  The expression is said to stem from a comment made by Lauren Bacall (Bogart's wife) who, when Bogart and his cronies came home from a night of carousing, said, "You all look like a [expletive] rat pack."   The group didn't like the name, referring to themselves instead as "the Summit" or "the Clan", but it stuck.  After Bogart's death, Sinatra became the leader of the group.  Other members included not only Sammy Davis, Jr. and Dean Martin but Peter Lawford (brother-in-law to JFK) and Joey Bishop.

As people were heading to the parking lot, ideas were being thrown out for next year's concert.  A Beach Boys tribute band?  The Rolling Stones?  Back to the more traditional CSO Pops?  Whatever is decided, I know it will be another fun evening Punta Gorda style.