Family vacations are fraught with danger.  If you'd asked me a couple of weeks ago, I would have said that the danger was purely of the emotional variety.   While there was plenty of emotion expended during my recent beach vacation with my family, I also found myself in what felt like physical danger when we spent the day at Shipwreck Island Water Park.

Not having any kids, it's been a long time since I've been to an amusement park.  I have decided there should be a statute of limitations for going on any kind of ride that makes your stomach drop--maybe the last time you went on a coaster plus seven years.  Having violated this rule, I probably shouldn't have been surprised when I found myself screaming and a bit nauseous after even the mildest of rides.  And yet I was.

We started off easy on the White Knuckle River ride (located next to Pirates Plunge, a body slide that was Drew's first stop). Suzanne refers to White Knuckle as a "family ride" because up to four people can get in the inner tube and ride down the 660 foot twisting chute together.  It actually was fun (after the initial drop) to swirl around in the tube until you splash into the pool, and Suzanne and Drew only teased me a little bit about my shrieking.  Maybe I could do this after all.

After going on a few rides, we had worked up to The Great Shipwreck, a zip line over a pool. I had never zip lined before, so I was a bit nervous.  As you wait in line, you can watch the people ahead of you.  Some made it all the way to the end of the line (approximately 30 feet) before dropping into the water.  Others had a bit more difficulty.  You probably won't be surprised to find out which category I fell into (the operative word being "fell").  Drew had gone ahead of me and was waiting by the ladder where you climb out of the pool.  Having dried my hands off as best as I could, I grabbed the line and, with only a moment's hesitation, stepped off the platform -- and immediately dropped into the water.  The amount of time I actually held onto the line gives new meaning to the word "nano-second."   When I made my way to the surface--quite humiliated--the life guards were shouting to see if I was okay.  Drew said that he wanted to call out too but (i) he was laughing too hard and (ii) he didn't really want people to know he was with me.   I made my swim of shame to the ladder and climbed out, putting on a brave face.    Then Suzanne was up, and of course she made it to the end, doing ballerina moves with her legs the whole time.  I will never live this down.  Later in the week we went to Baytowne Wharf where I tried to redeem myself by going on a more traditional zip line with a harness and a seat.  It was literally terrifying to walk down the ramp and step off into the void.  Zip lining is officially off my list of approved activities.  But I digress...

From there we were off to the "wave pool", which is exactly what it sounds like.  You venture down a beach-like ramp into a big pool and eventually waves start pouring over you.  It was fun but it made me feel like I was going to throw up.  Obviously, it was time for a healthy amusement park lunch!  (As an aside, it didn't take me long to figure out that fruits and vegetables are not part of the diet of many of the Shipwreck Island-goers.  I was thankful for the "no g-strings" sign on the way in, although that's there for modesty/safety rather than aesthetic reasons.  Many of the tourists who were at the water park apparently didn't have mirrors in their hotel rooms.  Many also appeared to have forgotten their sun tan lotion at home -- ouch!!!) 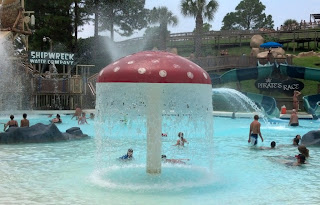 After lunch, we made our way to Skull Island (basically a kiddie pool) to hang out while we digested. If you look in the back of this photo you will see a small body slide called "Pirates Race".  I liked that one.  It was very relaxing in this pool (although the "rain" came down a bit hard on my sensitive skin).

As we were figuring out what was up next on our schedule, we noticed that the life guards were bringing out their yellow slickers.  On cue, we began to hear claps of thunder, and an announcement was made that the rides were closed until the weather had cleared.  I was both disappointed and relieved.

My Shipwreck Island experience was obviously nothing like going to Atlantis where--I hear--you can slip and slide through chutes in shark tanks and participate in other over-the-top rides.  But it was a fun day that will go down in our family history.  While I might be persuaded to go to a water park again, for the time being, hanging out in the pool with Jakie is more my speed.