It is official:  Rochester gets a bum wrap.  It is a great place to visit -- and probably even a great place to live if you don't mind a wee bit of snow and cold weather.  Rochester has an active arts scene, beautiful places to bike and walk, gorgeous lakes within easy driving distance, and a lot of history.  Here's a quick round-up of some highlights from my trip:

Susan B. Anthony House:  Like a mother feeding her infant who sneaks in a spoonful of peas between bites of applesauce, Maggie always gives me a history lesson when I visit.  Last year we toured the Harriet Tubman House in nearby Auburn, and I came away with a greater appreciation of the Underground Railway.  This year's history station stop was the Susan B. Anthony House. For me, the house itself served merely as a backdrop for the stories about her life and work. (Old dusty furniture isn't really my thing.)  I learned that when Anthony was a young girl, her teacher refused to instruct her how to do long division because a woman would never need to know such an advanced level of math.  When Anthony's father, a middle class mill owner, learned about the exchange, he started a school for his and the other mill workers' children where they could all learn equally.  Go, Dad!  I was also reminded that in 1872, Anthony and several other women were permitted to register to vote and to cast their ballots in the Presidential Election.  The women and the election officials who allowed this sacrilege to occur were arrested. At Anthony's trial, the judge issued a directed verdict against her, reading an opinion from the bench that he had written before the trial even started.   So much for listening to Anthony's arguments that the recently passed Fourteenth Amendment, which gave all citizens the right to vote, applied equally to men and women.   And a final "fun" fact:  the reason Susan B. Anthony is always shown in profile is because she had a lazy eye.  Even suffragettes have their moments of vanity.

Memorial Art Gallery:  The Memorial Art Gallery has added a sculpture park to its premises since my visit last year.  Most of the sculptures in the park are from the Creation Series by Tom Otterness.   The theme of the series is a woman sculptor carving a male from a block of stone.  The sculptures are kind of interesting but also kind of odd.  Although Otterness is well known for his public sculpture installations, he is perhaps even better known for having killed his dog on video (the aptly titled "Shot Dog Film") back in 1977.   He issued an apology for his actions in 2007. 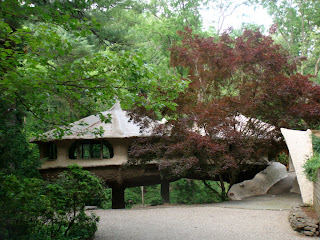 Mushroom House in Pittsford:  It's hard to believe, but people actually live in this house (which is comprised of multiple mushroom shaped dwellings).  The house was built in 1972 and was intended to combine art and nature.  If you want to see what the interior looks like, here's a link:  http://jhjarchitecture.com/MushroomHouse/pictures.html,   While I could never live in this house (among other things, how could you hang any art?), it is on the market for $1.5 million.  Give your broker a call if you're interested!

I haven't even mentioned experiencing the "Ring of Fire" at Conesus Lake or having lunch with Raffaele Ponti, the new maestro of the Charlotte Symphony Orchestra, and his family or playing bridge at the Chatterbox Club.  (I know--you wish I'd regale you with some of the interesting hands that we played, but I'll have to leave that for next time.)   Once again, Maggie and I were busy making plans for our next get-together as she drove me to the airport.  I am already looking forward to it!