The first day of Book Expo America (BEA to those in the know) is always a bit stressful.  My friend Wendi approaches the event like a military operation.  She does extensive research and prepares spreadsheets setting out where she wants to be when.  (Some serious cloning would be required to do it all.)  While I also do some research, when I start talking to Wendi about what's going to be happening, I generally end up feeling like a kid who turns up in class having studied for the wrong test.  I was quite proud of myself when I realized before she did that author Sue Grafton would be signing the galley of her latest book, W is for Wasted, at 10:00 on Thursday morning.  Don’t  worry, though.  By the time we arrived at the Javits Center, the signing had been added to Wendi’s spreadsheet, a copy of which was clutched in my hands.

After the first frantic rush through the convention center grabbing the galleys that were set out for the taking (an experience I always liken to running with the bulls in Pamplona), I dumped my books in the shipping area and consulted my list to decide where to go next.  There is a lot of strategy involved in getting the books that you are most interested in coming home with.  (This is the reason to do your homework before you arrive.)  In addition to the piles of galleys, there are timed galley give-aways and signings both in the booths of the larger publishing houses and in the autographing area.  I knew I wanted the Sue Grafton book but there was also a galley give-away for Amy Tan’s new book at 10:00 and Richard North Patterson would be signing his latest book at 10:30.   What to do?

It’s a bit of a blur but to the best of my recollection I waited impatiently in line for Amy Tan’s Valley of Amazement and then headed over to meet Sue Grafton.  As you can see by this picture, she is quite lovely and was one of an increasing number of authors who was shaking hands with the readers as they came through the line.  (Happily, I am not a germaphobe.)

Then I was off to get the Richard North Patterson book, Loss of Innocence.   He was also quite engaging and didn’t take offense when the guy in front of me “confessed” that he had never read any of his books.  I told him that he would be stocking up after he read his first one (figuring it never hurts to flatter the author a bit) and was rewarded with a smile from Patterson.  He confided that he is really proud of this book.  (Surprisingly, no author told me that they didn’t think their latest book was particularly good.)  Then I was off. 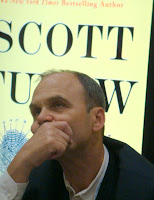 The day went on and before I knew it it was time to get on line for Scott Turow’s latest book Identical.  Of course, I’ve been a big Scott Turow fan since I read his book One L in preparation for my stint at Harvard Law School.  (It wasn’t quite as scary as he made it out to be.)   His publisher took the tack of handing the books out to people on line for the signing well before they arrived at the desk.  The bad devil on my shoulder made me take the book and run rather than wait for his signature.  I did, however, get a nice shot of him signing for someone else.

Throughout the three day event, there were loads of other thriller writers signing.  The line for David Baldacci signing The Hit (out this week) was so long that I knew I didn’t have the stamina to wait it out.  Nelson Demille was signing an excerpt—the first six chapters of his newest work—so I passed him up as well.  Laura Lippman was promoting the paperback publication of And When She Was Good.  (My friend Lee overheard her apologetically saying she wouldn’t have been at BEA without a new book out but she was in town anyway and the Mystery Writers Association prevailed upon her.  Hey, I’m not above taking a copy of an older book that I haven’t had a chance to read yet.)   I also picked up copies of the latest from former prosecutors Linda Fairstein and Marcia Clark.

The last day of BEA historically has been somewhat quiet with fewer authors signing and publishers packing up their booths.  Wendi and I generally have gone just for a couple of hours to scour the floor for galleys that we somehow missed over the prior two days.  Not so this year with the introduction of the “power reader” one day pass.  Over 2000 consumers made their way onto the floor when the doors opened at 9, and we watched them walk around wide-eyed like kids in a candy store.  (Just to back pedal a bit, BEA is geared towards bookstore owners and librarians who publishers hope will fall in love with their books and purchase them in huge quantities.  Educators—even more or less faux educators like me—are also welcome to ante up their admission fee and attend the event.)   So Saturday was a bit busier than usual, and the schedule included a signing by Jeffrey Deaver, whose Lincoln Rhyme character is one of my favorites.  I was excited to get a copy of his latest, The Kill Room, and also to hear that another movie is in the works.  (Apparently, there has been litigation over the foreign rights to the Lincoln Rhyme character since the movie The Bone Collector starring Denzel Washington and Angelina Jolie came out in 1999.  He doesn’t know if Washington will be reprising his role, but it’s something to look forward to either way.)

Since I’m still waiting for the two boxes of books that I shipped to arrive, I can’t give you an accurate count of how many books I brought home with me or how many of those books are thrillers.   My off-the-cuff estimate is 125 books in total, at least 30 of which fall into the thriller genre.  If I'm a little jumpy the next time you see me, you’ll know why.