Wealth of Art at the Naples Art Museum, Part 2

My new home endeavors are cutting into my writing time as well as my wallet.  Plus I haven't really found "the" spot in my new digs that feels like the right place to do my writing.  So bear with me as I go through this transitional period!

I wanted to return to my visit to the Naples Art Museum with its bounty of exhibits.  In addition to the "Painting Women" show, I was curious to see "Revelation:  Major Paintings by Jules Olitski."  I had never heard of Olitski until about a year ago, when my friend Susan saw the show at the Toledo Museum of Art.  It would have been fun to see the show in Naples with her and get her perspective on a second viewing, but our schedules didn't cooperate with this plan.  So here's my quick and dirty overview:

"Revelation" (on display through July 7th) takes viewers through Olitski's art from 1960 - 2006.  His works are broken down into five categories:  Stain Paintings, Spray Paintings, Baroque, High Baroque, and Late Works.  It's always interesting to get a sense of the body of an artist's work.  All of Olitski's work is abstract, but the styles and moods vary significantly from one period to the next.  Olitski was instrumental in the development of "color field" painting, a style of art on the continuum of modern art after abstract expressionism.   (When I think of abstract expressionism, I think of Jackson Pollock splattering his paint against his canvas.   Many of the works of Mark Rothko--the subject of the wonderful play "Red" that I saw last year--fall into the school of color field painting.)

In his earliest works--the stain paintings (1960-1964)--Olitski poured paint onto unprimed canvases.  Olitski didn't even use a brush to create these works, differentiating himself even more from the abstract expressionists.  I preferred the feel of his spray paintings (1965-1970), though.  Olitski said that his goal was "a spray of color that hangs like a color, but does not lose its shape."  I think he was quite successful in achieving his goal.  These works are very peaceful--they reminded me of shimmering clouds of paint hovering on the horizon--and I stood contentedly looking at them for a while.

The 1970s and '80s found Olitski in his Baroque and High Baroque periods when he focused on the physicality of paint.  The word "baroque" always makes me think of things that are heavy and dramatic and a bit overblown, and Olitski's paintings don't dissuade me of this interpretation.  In this photo of a detail of Olitski's "Lives of Angels," you can get a sense of the heaviness of the paint and why Susan said she was most interested in the way that Olitski "moved paint around the canvas."  For these thick impasto paintings ("impasto" means "dough" in Italian), Olitski poured paint onto the canvas and then created his works with his hands, wearing cotton mitts.  A sophisticated take on the art of finger painting!  These canvases are alive with the waves of paint swirling and turning before your eyes.  Most of Olitski's paintings are on a grand scale (in this case 68" x 129") that enhances the mood created.

At the end of Olitski's life, he created a series of works "With Love and Disregard."  He painted splendor and silence and rapture and pleasure.  These paintings combined aspects of his earlier works--particularly the orbs from his stain paintings and the impasto style of his baroque works--in a way that critics say evokes landscapes and city views.  I admit that I didn't quite see that, but who am I to say?  With these works I found myself at the end of the "Revelation" show.

The final show I wandered into was "Multiplicity," a collection of works from the Smithsonian's collection.   (This show is also on display through July 7th.)  The exhibit contained a variety of prints and paintings that were part of a series of works done by an artist.  In some cases, you only saw one of the works, so you didn't really get the impact of the multiplicity.  It was fun to see this work by Jim Dine, though, which is a monocut woodcut that he hand painted.  (Dine did a number of sculptures inspired by the Venus de Milo, including two bronze sculptures that are on the corner of Sixth Avenue and West 53rd.  I'm going to try to visit them when I go to New York for the Book Expo in a couple of weeks.) 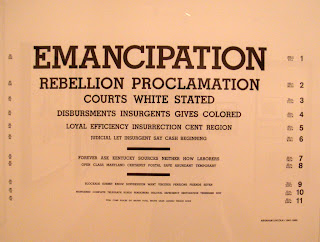 There were three works by R. Luke Dubois from his series entitled "Hindsight is Always 20/20" that were quite fascinating.   These works feature the 66 most frequently used words in a State of the Union Address by each U.S. President.  (Harrison and Garfield died before having the chance to give their addresses, so they are omitted.)  DuBois has styled these works after an eye chart (which has 66 letters), with the words used the most in larger print at the top of the chart.  Dubois did two versions of these works, one a series of light boxes and the other a series of bosed prints.  This print is of course from Abraham Lincoln's State of the Union address.  I can only imagine how interesting it would be to spend time looking at the series in its entirety--a study in creativity as well as history.

With that, my visit to the Naples Art Museum was complete.  Once again, I'd learned some things, not only about art, but about myself.  It's always a surprise to find out which works draw me in and which leave me cold.  Like the world of art itself, my arts education is a continuum.  I'm looking forward to the next chapter.