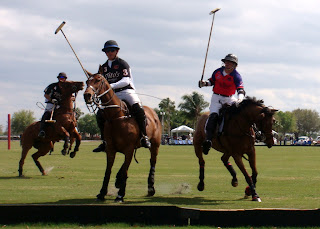 Did you automatically cry out "polo!" when you saw the title of this post?   I found myself doing so last week-end when I went with a group of folks from the Isles Yacht Club to a polo match at the Sarasota Polo Club.  As we were approaching the grounds, there was a picture of a polo player in the median with "Marco!" emblazoned across the bottom of the sign.  After blurting out the requisite response, I started thinking about how apt the reference to Marco Polo was.  The explorer set out for unknown parts in the 13th century, providing later inspiration for Christopher Columbus' journeys.  I, too, was setting out for a totally foreign experience.   In fact, while Bruce, Dorrit, and I were on our way to the match, Bruce suggested that I google "polo terminology" in hopes of understanding the language associated with what we would be seeing.  My favorite term is "chukker."  There are six chukkers during a match, each of which lasts seven and a half minutes.  But I am getting ahead of myself.

For the past few years, Jack Chopp has organized a polo outing each season for IYC members and friends.  Jack is the perfect guy to do this since he's not just a polo fan; he's a retired (for the moment) polo player of 30 years.  (Amazingly, Jack didn't even start riding until he was 40 years old.  He had to stop playing polo last year when he had open heart surgery, but he's chomping at the bit to get back to it now that he's healthy.)  I had the chance to talk with Jack the day before the outing to get a bit of background.   He started off by telling me that the sport originated in Persia where they played with decapitated heads instead of balls.  (In buzkashi, a precursor to polo and the Afghan national sport, a headless goat carcass is used. )   Jack explained that we were going to see an eight goal match, which means that the cumulative ratings of the four person team have to add up to at least eight.  Each year players are rated from -2 to 10 (with 10 being the equivalent of a Michael Jordan or Tiger Woods in the day).  Ninety percent of U.S. players are rated 1 or lower.  Ratings are based on both the skill of the player and the player's string of horses.  Players bring a minimum of four polo ponies with them to each match,  rotating them out each chukker.  Horses that are ridden twice in a match are referred to as being "double-chukkered."  In the match we saw, some of the players also swapped out horses when there was a break in the play.  I was beginning to understand why the sport is called the "game of kings." 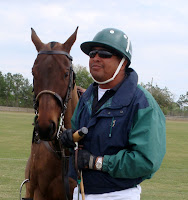 Jack had arranged for Eddie Martinez, one of the umpires for the day's match, to give a talk and demonstrate some of the shots before the match began.  (Eddie's horse that day was Maria Bonita, one of 26 in the string that he and his son share.)   We learned about the "highway" that the players ride on, which is basically the line on which the ball is moving.  Fouls can be called for a number of reasons, but the most common is when a player crosses the line of the ball in front of an opponent (essentially veering off the highway).  He told us that all riders are required to play right-handed for safety reasons.  He showed off Maria Bonita's musculature (which is quite visible because polo ponies are shaved).  After being shown the difference between an offside shot, a near-side shot, a neck shot and a tail shot, it was time for the match to begin. 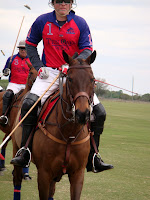 Even with the briefing, I found it a bit hard to follow what was going on during the match.  A polo field is the size of 11 football fields, so it's difficult to see what's happening if the action isn't right in front of you.   It was quite exciting, though, when the horses thundered down the field near us.  At one point, they even came over the boards into the intermediate space between us and the field!   We also had the chance to see some penalty shots at our end of the field.  Where the foul occurred and its seriousness determine where the shot is taken from.  Some fouls are defended against; others are "free."   When a goal is made, there's a watcher who raises a red flag (which I found quite helpful). 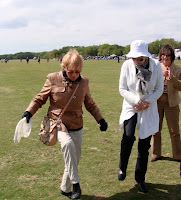 After three chukkers, the players get a ten minute rest.  This is when the spectators have the opportunity to participate in the time-honored tradition of divot stomping.  (Jack warned us to look out for the gooey brown ones.)  Our group gamely made our contribution to the task.  It was fun, and a good way to warm up on a day when the mercury topped out at around 57 degrees.  (Yes, we were wearing our woolies.)

At the end of the match, Ten Oaks had bested Tito's Handmade Vodka by a goal or two.  It had been a successful introduction to the sport of polo.  The season at the Sarasota Polo Club runs through April 7th, with matches open to the public each Sunday for a modest admission fee.  For the serious players, the action will then move north for the summer to locales such as St. Louis and Madison, Wisconsin (where Jack founded the polo club in 1986).   I'm already looking forward to our outing to a match next year.   Let me know if you want to join us!
at March 09, 2013

Email ThisBlogThis!Share to TwitterShare to FacebookShare to Pinterest
Labels: IYC