Dressing the Actors at Asolo Rep

There's an old saying that "Clothes make the man."  I'm not sure about that, but I am sure that costumes are crucial to making an audience believe the persona of a character that an actor has assumed.  This week Dorrit and I had the chance to attend a master class of sorts at Asolo Rep with David Covach, Head of the Costume Shop at the theater, and Eduardo Sicangco, guest costume designer for "The Game's Afoot."   It was great fun to get a glimpse into the process of creating the wardrobe for the show.

Sicangco has an impressive resume.  His credits include the costumes for productions ranging from a Rockettes show at Radio City Music Hall to "Carmen" at the New York City Opera to a Siegfried and Roy show at the Mirage in Vegas that was made into an IMAX film.  Eduardo views his job as making the actor feel as "beautiful or beautifully ugly" as possible so that he or she can be confident on stage and focus on the performance.  This was his third engagement at Asolo Rep, and he walked us through his process.

Before picking up his sketchpad, Eduardo read "The Game's Afoot" to understand the play's setting, characters, and tone.  Then he started drawing his vision of the players and their wardrobes.  The costume designer is responsible for all of the details about how an actor will look onstage, including hair color and style.  Sicango told us that restraint is typically required in costume design since you want the audience to relate to the characters as if they were real people.  That's not the case with this production, though, which is a farce set in 1936 about a bunch of actors at a Christmas Eve party who become mired in a murder mystery.  At that time, the creations of Coco Chanel and Elsa Schiaperelli were all the rage, and glamour was part of the equation. It was an era of dressing gowns and hats with porcupine quills and bird's nests (like this creation that will be worn in the show). 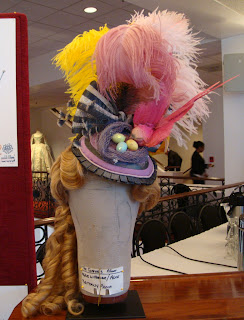 Once his costume drawings were completed, Eduardo sat down with director Greg Leaming to get his input.  After incorporating Leaming's comments, the sketches were turned over to David Covach to bring to life.  Covach has been with Asolo Rep for 18 years and has overseen the creation of over 10,000 costumes during that time.  Once he had the designs in hand, he determined what could be used from the Asolo's extensive inventory of costumes from prior productions and what needed to be created.  For "The Game's Afoot", all of the women's costumes and approximately half of the men's costumes had to be fabricated.

David and Eduardo met in New York and trolled fabric stores to find material that would work for Educardo's designs.  It sounds like a bit of negotiation was required to accommodate both Eduardo's vision and David's budget.  The fact that the Asolo has an in-house costume department helps control costs since there are no additional labor charges.  This makes a huge difference.  Eduardo told us that, with labor, a brocade jacket such as the one above would run $15,000+ for a Broadway show.  (The cost of the jacket for "The Game's Afoot" wasn't shared with us, but it presumably was substantially less.)

Copies of Eduardo's drawings were passed around, and it's no exaggeration to say that they are works of art with an incredible amount of detail.  (He jokingly told us that sometimes when he's adding a flourish here or there with his "happy pencil" he thinks "ka-ching--that's another $1,000!")  And it was fascinating to see his notations.  He envisions Inspector Goring as a cross between Miss Marple and Columbo. (Needless to say, she doesn't get to wear a Chanel knock-off.)  Some of the costumes require rigging to permit a skirt to be torn or an actor to be stabbed.  (The guys shared their tricks of the trade with us, but I'll never tell!)  And one jacket has a "double" because it becomes blood-stained during the course of the performance.

Once the costumes had been created, there was a series of fittings at which Eduardo made sure that no detail had been overlooked.  He shared that the best thing about his job is watching an actor don his costume and undergo a transformation into his character before his eyes.  Further tweaks were required during the show's previews.  (At the Asolo, part of the audience looks up at the actors and part looks down, making hemlines particularly challenging.)  On opening night, the designer's job is done and responsibility for the care of the costumes is turned over to the wardrobe department.

And there you have it:  a peek into what's involved in creating the costumes for a theatrical production.  Dorrit and I were so pumped up that we nearly ran to the box office to get tickets for "The Game's Afoot," which we will be seeing tonight.  Having had the chance to talk with Sicango and Covach and having seen the set for the show being created, I know it's going to be a pretty special experience.   Watch this space for my review.