Last Sunday evening, I had the opportunity to combine all three of these "favorite things" when maestro candidate Raffaele Ponti led the CSO on a tour of Broadway theater classics.  The maestro had only half of one foot on the podium when the drums started beating and the CSO launched into a rousing rendition of "Give My Regards to Broadway."   After the intro, Maestro Ponti welcomed the audience to New York and beckoned us to join him at the theater where Leonard Bernstein's Candide was playing.  As the first half of the show progressed, we stopped in to hear bits and pieces of the music from 42nd Street and The Music Man and Fiddler on the Roof and Porgy and Bess.   "Seventy Six Trombones" always makes me smile, and I could envision Professor Harold Hill leading his "band" of children through the streets of Gary, Indiana.  (I realized during the performance that I associate the music that was being played with movies rather than Broadway shows--in this case I could see Robert Preston and pint sized Ron Howard quite clearly--but this variation on the theme didn't affect my enjoyment in the slightest.)    "Seventy-Six Trombones" aside, the music consisted of medleys from the selected shows.  When the CSO played "Symphonic Dances from Fiddler on the Roof" (which featured wonderful clarinet solos by Robert Felman and David Edwards), Maestro Ponti conducted using an almost hoe-down looking movement, with his elbows popping up on each beat of "Tradition."  (It sounds a bit odd but you could tell he was thoroughly enjoying himself, and it seemed to work.)  Before I knew it, it was intermission.

The second half of the show featured the music of West Side Story, An American in Paris, and The Sound of Music.  Here's a shocker:  I have never seen either the play or the movie West Side Story.   I have seen ballets that include Jerome Robbins' choreography from the show (which is stunning) and have heard singers perform songs from the show on any number of occasions, but I have never sat in a theater--or on my couch, for that matter--and watched the musical from start to finish.  (I had tickets for Charlotte High School's production in February but had to go out of town unexpectedly, so my record remains intact.)   The CSO performed Leonard Bernstein's overture for the play, and the music was gorgeous.   The musicians cried out "mambo" during "Dance at the Gym," and the cellists had a chance to shine during "Somewhere."    (Oliver Weston was principal cellist for this performance, and his animated playing was a pleasure to watch.)  The CSO's percussionists got a good work-out as well, which is always fun. 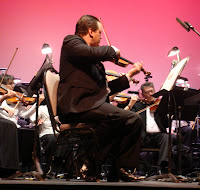 Then we were off to gay Paris, with our transportation fueled by the music of George Gershwin. The music from An American in Paris  (which was adapted from the 1951 movie featuring Gene Kelly) is romantic and soulful.  Throughout the evening, concertmaster Stewart Kitts had several solos, but his best--and longest--came during this number.  He is a true talent.

The performance wrapped with Richard Rodgers' "Sound of Music:  Selections."   The Sound of Music is one of my family's favorite movies, so I feel a particular connection with the songs from this show.   Rodgers' selections included bits from "Sound of Music" and "The Lonely Goatherd" and "My Favorite Things" and "Do-Re-Mi," and I can't imagine there was a person in the house who wasn't envisioning Julie Andrews twirling through the mountains and performing a puppet show and teaching her wards to enjoy the simple things in life.  (As an aside, I saw Julie Andrews at the Book Expo in New York a couple of years ago, and she is every bit as beautiful and elegant as you might imagine.)  The evening ended with a crescendo as the music from "Climb Ev'ry Mountain" filled the Event Center, and I think I was the first person in the audience to jump to my feet to give the CSO a standing ovation.

The concert season is nearly over, with Maestro Wada's farewell concert the only remaining performance.  It has been a season of truly wonderful and exciting music under the batons of three accomplished conductors.   Whomever is chosen as the new maestro next year, there is no doubt that the CSO will continue to bring the sound of beautiful music to its audience.   I'm already looking forward to it.