People here often say that something reminds them of "old Florida."  I have to admit to using the expression myself on occasion without really knowing what it meant.  Thanks to Google, I can tell you that the term is a reference to the Florida of at least two generations ago, when times were simpler.  You would never, for instance, go to South Beach and say, "Oh, this reminds me of old Florida!"   Think instead trees with Spanish moss draped over them and rambling plantations. 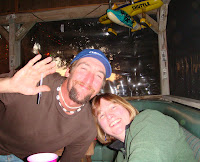 My friend Maggie recently came for her annual visit and got a real taste of "old Florida" when I took her to a night of food and fiddling at the Bean Depot in El Jobean.   Friends Lindsey and Jim joined us, and they had told me to warn Maggie that our destination fell somewhere between a dive and a shack.   Not surprisingly, Maggie was a bit apprehensive.  It was quite hilarious as we settled in and our waiter came to take our drink order.  You can't be fussy at the Depot  They have an extensive beer list, yet didn't have the first four or five of her selections in stock. There were some holes in the screened in porch where we were sitting and someof the gnats gravitated to Maggie's head.  (Jim called them "see-ums.")  Maggie only half jokingly wondered aloud when the last time the health department had visited.  Ordering dinner was hysterical as Maggie asked the waiter about this or that item on the menu as if the Depot were a fine dining establishment.  As the food started arriving, though--delicious fried fish with fries and homemade cole slaw--and with the help of a couple of beers, I could see her start to loosen up and she eventually even made friends with our waiter. 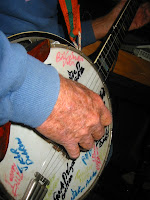 I know that this might not sound like an optimal experience so far.  Why in the world would I take a visitor to dinner at the Depot?  The answer is:  the music!  Each Wednesday night the Depot hosts whatever musicians want to drop by with their fiddles or guitars to put on a show. 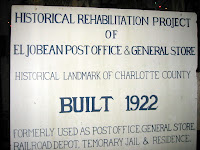 I don't know how the Wednesday night music tradition got started, but the location has long been an attraction in the area.  Back in the 1920s, Joel Bean platted the area that is now El Jobean and built a post office, general store, and hotel.  The Bean Depot is actually housed in the former post office/general store, and has the old signage to prove it.  The hotel is now shuttered, but it was quite the place in the day.  In the 1930s, MGM used the facility to house actors and crew that were shooting in the area.  In the '40s, Mr. Bean sold the hotel to Leo "Suicide" Simon, and the hotel became the location for his daredevil acts and the winter quarters for carnival acts like the Flying Wallendas.  (Simon was best known for two acts.  The first was climbing up 150 feet, lighting himself on fire, and diving into a small pool of water.  When that grew old, he would lock himself into a box with two sticks of dynamite, light them, and see what happened.  Simon died at the age of 62 of natural causes.) 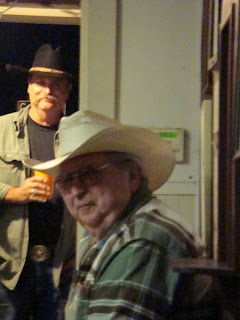 Getting back to the present, the action on our evening at the Depot was going on in the back room.  (Depending on the night, there might be music in both the front and back rooms and outside on the patio.  You are never sure what you're going to get, which is part of the charm.)   Several old guys--and I'm not kidding when I say old--were picking on their instruments and singing whatever struck their fancy.   A female vocalist accompanied them on occasion (in between bites of her burger, which she ate quite unself-consciously).   There was an easy camaraderie among the performers as they flowed from one song to the next, taking turns on lead and providing back-up as required.  We didn't know most of the songs (although there were a couple of Willie Nelson tunes), but that didn't diminish our enjoyment in the least. 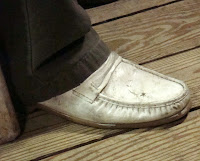 And did I mention the people watching at the Depot?  The music attracts people from all walks of life, from cowboys (where did these guys come from?) to snowbirds.  The Depot is so low key that waitstaff doesn't even come to the back room to take drink or food orders.  If you want something, you have to go let them know.  If you want to just enjoy the foot-tapping music, it's not a problem.

A night out at the Bean Depot is not for everyone.  But if you're interested in having a fun "old Florida" experience with some good music, head out 776 to the El Jobean Bridge on a Wednesday night.  Make sure you get there by 5:45 if you want to get a seat!