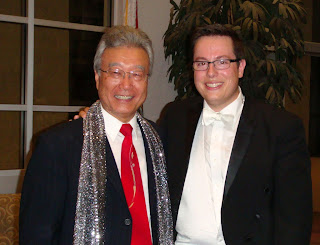 Last December, patrons of the Charlotte Symphony Orchestra were treated to a holiday pops concert led by guest conductor Matthew Wardell.  It was an incredibly fun night of music with the CSO at its best and, when combined with Wardell's easy rapport with the audience, it was clear that he would be a serious contender for the position of maestro and music director of the CSO.  The question, though, was whether Wardell could successfully conduct the CSO in a classical concert. The answer is a resounding "yes."

Saturday night's concert was entitled "Elements of Music:  Earth, Water, Wind, and Fire."  Wardell explained in the pre-concert lecture with Katherine Caldwell that he wanted to harness the elemental power of music in one concert.  All of the pieces in the evening's repertoire told stories that provided "extra-musical content" for the audience to connect with as they listened.  In Wardell's view, knowing the stories behind the music is like having subtitles in a foreign film.  If you watch a French film and don't know the language, you might still enjoy the action and the scenery, but your experience will be less powerful than if you could follow along as the plot develops.  Wardell feels strongly that letting the audience in on the back story is an important part of his job, and the concert was much richer as a result.

The concert kicked off with Liszt's Totenkanz (Dance of Death) featuring guest pianist Darren Matias. It is difficult to imagine a more thrilling piece of music.  It was dramatic and unexpected and exciting.  I found myself on the edge of my seat in eager anticipation of what would come next.  Matias attacked the piano with a passion and virtuosity that left the audience breathless. (Comments from the audience included, "He's a wild man!"  "What a phenomenal individual."  "I've never heard anything like this before.")  The conversation between the piano and the rest of the instruments was nothing short of amazing, and when the piece ended, the audience gave a thunderous standing ovation and a chorus of "bravos."  Matias came back for a mid-concert encore, playing Liszt's Hungarian Rhapsody No. 2 (from Tom & Jerry fame), which led to a second standing ovation.  The evening was off to an amazing start.

Next up was Dvorak's The Water Goblin, Opus 107.  Wardell both told the audience the story behind the music and introduced the instruments that would be playing different roles during the piece.  (He compared it to Peter and the Wolf for "really smart wolves.")  The inspiration for the music was a Czech fairy tale about a mother who has a premonition that her daughter will be in danger if she goes to a nearby lake.  The daughter ignores the warning, and the mother's premonition comes true when the daughter is abducted by the evil water goblin and ends up as his bride.  The flutes played the character of the goblin; the clarinets portrayed the daughter; and the violins assumed the role of the mother.  Having the story in mind as the music unfolded only served to enrich the CSO's performance.  As the first half of the show came to a close, the woman sitting next to me said, "Well, THAT was fun!"

Wardell and the CSO picked up where they left off after the intermission without missing a beat.  Wardell had barely stepped onto the podium when the violins began to buzz as the music of Ralph Vaughan Williams' Overture to the Wasps filled the performing arts center.    Spring was in the air, and I felt like kicking up my heels to this piece that had a surprising feel to it of being out on the prairie.

Last, but by no means least, was Stravinsky's Firebird Suite (1919).  Once again Wardell introduced this piece, and the audience laughed as he explained that the suite tells a complex story that has something to do with a giant egg with a needle in it that was in a box that was chained to a tree that mysteriously changed locations.   What seemed important to understand was that Kashchei the Immortal ruled his realm with an iron fist and did not appreciate it when Prince Ivan dared to fall in love with one of the fair princesses of his kingdom.  Ivan became allied with the Firebird, whose music caused Kashchei and his creatures to dance a frenetic dance until they become so exhausted that they fell asleep.  Ultimately, Ivan learns that Kashchei's soul lives within the giant egg, and he kills Kashchei by destroying the egg.  Ivan and the princess live happily ever after.  Given the complexity of the story, it's no surprise that the music was both mysterious and exciting.  At times the melody was soporific as Kashchei is worn down from dancing the "Infernal Dance".  At others it was triumphant as the horns heralded the death of Kashchei and the dawn of a new day.  Throughout, the musicians of the CSO did an incredible job interpreting this story. In the course of the evening, we had been taken on a wonderful journey, from death to resurrection.

Maestro Wada's tenure at the CSO will be remembered for many things.  Perhaps most important to his legacy are the creativity that he has shown in his programming and the confidence that he has exhibited in the ability of our musicians to rise to the challenges he has put before them.  There is no question that both the CSO and its audience have benefited as a result.  If "Elements of Music" is representative of what Wardell would bring to our community as the new maestro and music director of the CSO, Maestro Wada's legacy would not only remain intact, but would be built upon in fresh and exciting ways.  The bar has been set high for Raffaele Ponti, the third conductor auditioning for the role of maestro and music director of the CSO.  It's getting exciting.

Note:  This article was published in the January 17, 2013 edition of Florida Weekly.