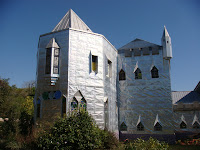 The saying goes that a man's home is his castle.   This certainly applies to Howard Solomon, creator of Solomon's Castle in Ona, Florida.  Trust me when I say that this destination is unlike any other.   You truly have to see it to believe it. 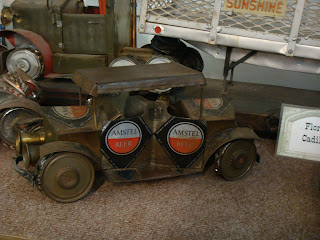 Solomon never comes upon a discarded item that he doesn't like.  His castle--and most of the art in it--is created from recycled materials.  The exterior of the building is made from aluminum offset printing press plates.  The interior is filled with odd little creations made of things like beer cans and oil drums, and most have puns associated with them that will make you groan out loud.   Take, for instance, "Coming or Going."  Solomon made the car out of beer cans during his "drinking period."  (Just to hit you over the head here, this seems to be a reference to Picasso's Blue or Rose Period.  Collective groan.)  The name comes from the fact that there is a steering wheel in each side of the car.  Our guide noted that this eliminates the opportunity for a passenger to be a backseat driver.  Ba-da-dum. 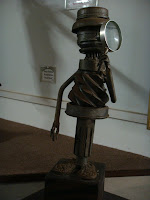 There are dozens of sculptures throughout the Castle made primarily from discarded car parts and related items.  This work is entitled "Christopher Colombo:  Discovering Crime."  (I actually kind of liked this piece, but I'm a fan of detective shows from way back.)  Another sculpture in the collection is a cow whose body is made out of an oil can with a hole in the center.  Guess what kind of milk you get from it?  (For those of you whose brains aren't firing on all cylinders at the moment, the answer is whole milk.    Another collective groan seems in order.) 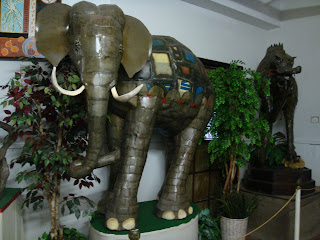 Just when you think you can't take it anymore, you come upon a work that shows that Solomon actually has some talent in addition to a truly odd sense of humor.  Solomon spent over 300 hours creating this giant elephant sculpture which he calls "Jeb the Bush Man."  (It was made during an election year.) 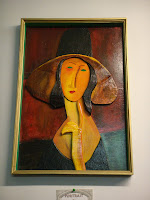 It was about this time in the tour that I started feeling a bit frustrated that the guide's job consisted of reciting a script written by Solomon as we walked through the rooms. We were told what some of the works are made of (the materials for the elephant include oil drums and sea shells) and the names of the works so that we didn't miss the puns.   There wasn't much room for questions, though, or any sort of dialogue about what you were seeing.  Nor did we get the opportunity to linger and study the things that interested us, like the the wooden montage of Modigliani's Portrait of a Woman with a Hat.  This montage was one of several Modigliani-inspired works and is a prime example of a piece I would have loved to have known more about.  What are these beautiful montages doing in the midst of all the pun-inspired sculptures?   Why Modigliani, who happens to be one of my favorite artists?  Unfortunately, I knew that if I asked, I wouldn't get a straight answer since the question was not part of the script.

The whole place is full of surprises, but perhaps the biggest surprise of all is that Solomon and his wife Peggy actually live in the Castle.  We toured their living room and kitchen, and there is no respite from Howard's creativity. The windows in the kitchen are made of stained glass with images of the various arts and are quite well-done.  (Again, Solomon's talent emerges in the midst of all the kitsch.) The Castle's tower also features stained glass windows, this time with the theme of  nursery rhymes.  I particularly like this homage to "Hickory, Dickory, Dock."

Once the tour was over, Maggie and I retreated to the Boat on the Moat for lunch to muse over what we had seen.  We mostly just shook our heads as we tried to figure out how--and why--such a place came into existence.   It was quite an outing, though, and certainly not the type of place that you can experience just anywhere.  If you do venture to the Castle, don't miss the homemade walnut pie.  Even if you don't enjoy the art and the puns, it makes the trip worthwhile.