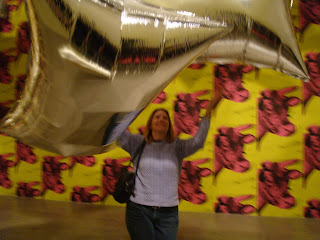 The one thing I was learning about the Warhol exhibit at the Met was to expect the unexpected.  Still, it took me by surprise when Wendi and I entered a room covered with cow wallpaper that had huge helium star-shaped balloons floating all around and music playing from a Lou Reed album that Warhol produced.  (Here's a question.  What's the deal with the wallpaper?  I understand the seriality and all that, but I'm curious about the logistics.  Is there an enormous roll of it somewhere that they use for exhibits or are pieces actually moved from one exhibit to the next or what?  Inquiring minds want to know!)  In any event, we had entered the aptly named portion of the exhibit entitled "No Boundaries:  Business, Collaboration and Spectacle."

There's no doubt that Warhol was all about pushing the boundaries in art.  At the time he hit the art scene, abstract expressionism was the favored style in modern art (think Motherwell or Pollock or Rothko).  Not only did Warhol move away from abstract expressionism, some people consider him responsible for the "death of painting."  Rather than stand in front of an easel and create a work using paints and a paintbrush, Warhol appropriated images created by others and "took the hand out of art".  Wendi used this last phrase repeatedly when talking about Warhol's contributions to the art world, and it took me a bit of time to actually wrap my head around it.  Warhol took images already in existence and turned them into art.  Sometimes his raw material was a box of brillo pads; sometimes it was a photograph taken by someone else.  Often he turned the image over to someone else--or a machine--to actually create the work.  Pretty revolutionary.

The remaining theme of the Warhol exhibit was "Consuming Images:  Appropriation, Abstraction and Seriality."  As you've probably gathered by now, any of these themes could easily be the subject of an entire exhibit, and many, many articles and books have been written about each of these topics.  In fact, even the courts have written extensively about the concept of appropriation in the art world.  Thinking back to the silkscreens of Jackie, it's obvious that Warhol didn't actually take the pictures that he used to create his work.  He appropriated a photograph that someone else took and adapted it for his use.  The exhibit contained works of other artists who similarly appropriated images created by others, including some works by Richard Prince, a photographer perhaps become best known for "his" images of the Marlboro man.  Prince would photograph another photograph--often from a magazine ad--and enlarge it and sell it as his own.  One of his pictures was sold by Christie's for over $1MM (which you can imagine would make the original photographer a bit piqued).  The lawsuit as to whether what Richard Prince did was sufficiently transformative of the original photograph to fall under the "fair use" rules is ongoing, although Prince lost at trial (even with attorney David Boies as lead counsel in the case).  The Andy Warhol Foundation, Google, and the Association of Art Museum directors have all filed briefs supporting Prince's appeal.  A similar issue was raised with respect to Stephen Fairey's use of a photograph taken by AP freelancer Mannie Garcia in his creation of the Obama "Hope" poster that sold like hot cakes following his first election.  That case settled out of court.  (For a short primer on appropriation in the art world, click here:  http://en.wikipedia.org/wiki/Appropriation_(art).)

As I find myself digressing from the actual Regarding Warhol exhibit, I am realizing both why it took me so long to tackle writing about this exhibit and, much more importantly, what a thought-provoking show it was.  (Again, I must give Wendi and her encyclopedic art knowledge a good deal of credit for making me really consider some of these questions rather than just giving them a flitting thought while passing through the show.)  The show did get a fair amount of criticism from the art world for a variety of reasons, with the most significant being that it's unclear whether many of the artists whose works are displayed were actually influenced by Warhol. The review in the NY Times made the point that not all of the living artists whose work was included in the exhibit were interviewed for the show and that at least one artist came right out and said that any connection between her work and Warhol's was tenuous at best.   http://www.nytimes.com/2012/12/02/books/review/regarding-warhol-sixty-artists-fifty-years.html?emc=eta1  Whatever the criticisms, I enjoyed both seeing and thinking about the show immensely.  And now it's time for a nap.