Warhol is probably best known for his silkscreen paintings of celebrities, so it's no surprise that the curators of the Met chose "Portraiture:  Celebrity and Power" as one of the five themes of the exhibit.  What people perhaps don't know is that there's a dark side to many of these iconic images.  Did you know, for instance, that Warhol only became interested in Jackie Kennedy as a subject after JFK's assassination?   With his finger on the pulse of popular culture, he was drawn to the media blitz surrounding Jackie after Kennedy's death, and many of his works include images from the moments immediately prior to the assassination and at the funeral. 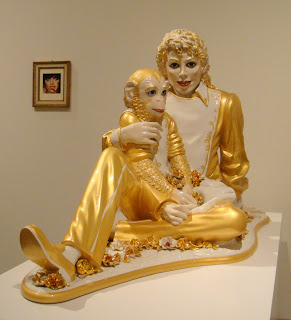 One of the most striking works by another artist in the category of "celebrity and power" was Jeffrey Koons' life-size, gold leaf painted porcelain sculpture Michael Jackson with Bubbles.  (Bubbles, you may have forgotten, was Michael's pet monkey.)  Koons created three of these sculptures in 1988 as the culmination of his "Banality" series.  The creepiness of this sculpture seems like a harbinger of how weird Jackson would get in his later life.  FYI, in case you can't quite place Jeffrey Koons' name, he's the artist who was married for a while to Cicciolina, the Italian porn star who served for five years in the Italian parliament.  (Honestly, I couldn't make this stuff up.) 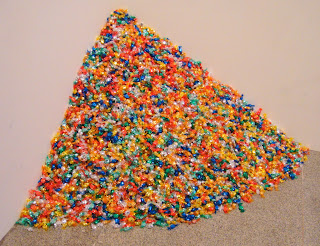 From there we were on to "Queer Studies:  Shifting Identities."  I honestly have to say that before we got to this room, I'd never thought about Warhol's sexuality one way or another.   It certainly doesn't define his art the way that it does, say, Robert Mapplethorpe's work, so I didn't quite understand this as one of the themes.    Having said that, this room contained a haunting conceptual work named Untitled (Portrait of Ross in LA) by Felix Gonzalez-Torres.   When the exhibit opened, the work consisted of a 175 lb. pile of hard candies wrapped in brightly colored cellophane.  The weight of the pile represents the weight of Ross, Gonzalez-Torres' partner, at the time he contracted AIDS.  As museum-goers walk through the exhibit, they are invited to take a piece of the candy, and the diminishing pile represents the way that Ross diminished before he succumbed to the disease.  While the work certainly isn't traditional art, it makes a powerful statement.

We had now made our way through three of the five themes of the show.  It had been an interesting and exhibit already and still to come were the themes of "Consuming Images:  Appropriation, Abstraction and Seriality" and "No Boundaries:  Business, Collaboration and Spectacle."   I couldn't wait to see what was in store for us around the next corner.