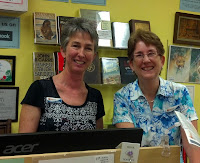 If someone had asked me what Punta Gorda needed to round out our little community, I would have been have hard pressed to come up with any suggestions (other than some ethnic restaurants!)  But the moment I walked in the doors of Copperfish Books, Punta Gorda's new bookstore, I realized that this was precisely what we needed.  (It seems so obvious that it reminded me of those commercials where the woman thunks herself on the head saying, "I could have had a V-8!" )  I discovered this gem before the holidays and feel an addiction coming on.  The store carries a mixture of used, new, and antiquarian books, and you are sure to find something there to add to your night side table.     Cathy and Serena own the store, and their enthusiasm is contagious. I found myself talking with Cathy about Anne Lamott's Bird by Bird (one of my favorite books), and the conversation just flowed from there.  (In fact, both my friend and I found ourselves telling Cathy all sorts of random things about our families and holiday plans.  She just seems like someone you've known forever and are always happy to see.)

Copperfish Books is bringing more to the party, though, than just a welcoming atmosphere and lots of great books.  During the season, they will be hosting weekly book readings by local authors.  Their first author was Michael Hirsh.  Hirsh is the real deal, with both a Peabody Award and an Emmy sitting on his mantle.  He was a combat correspondent with the 25th Infantry Division during the Viet Nam War where he earned a CIB (Combat Infantryman Badge).  He found himself in Afghanistan in 2002 as the first journalist to be embedded with an Air Force combat unit fighting the war on terror.  (His book None Braver:  US Air Force Pararescuemen in the War on Terrorism was the result of his time there.)   His book The Liberators deals with the stories of the people who liberated Jews from Nazi concentration camps.   Hirsch co-authored Terri: the truth with Michael Schiavo, Terri's husband.  The book chronicles Schiavo's battle to heal his wife and then to allow her to die with dignity and was a New York Times best-seller.

In between his stints in Viet Nam and Afghanistan, Hirsh spent 19 years working in Hollywood.  That sounded a bit incongruous until I learned that much of that time was spent working on and around the show M*A*S*H.  Hirsh wrote and produced Making M*A*S*H, a documentary about the TV show that I'd love to see.  http://www.mash4077tv.com/articles/makingmash/   He also worked as a documentarian on the show After M*A*S*H.  Although the show only aired for two seasons, it sounds like it was quite the experience for Hirsh to hang out with Larry Gelbart and a bunch of sitcom writers.

While working in Hollywood, Hirsh developed a relationship with Ed Asner, and he pitched a book in the early '90s about Asner with the working title "Never Trust a Guy Named Charlton".  (Heston, that is.  With the current controversy over gun control, I couldn't resist including this reference to Mr. NRA.)   The response to his proposal was, "Who cares about Ed Asner now?  Can you write a book about Seinfeld instead?", as if the two guys were more or less interchangeable. 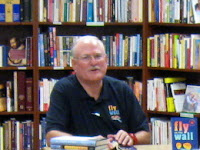 This is all very interesting, but it begs the question of how Hirsh came to be doing a reading in Copperfish Books in little Punta Gorda.   Hirsh and his wife Karen moved to Punta Gorda about a decade ago and lived through Hurricane Charley.  Although Hirsh has spent his life as an investigative journalist and documentarian, there's been a novel in him just waiting to come out, and fly on the wall is the result.  The book is a mystery about a guy who's found dead in Punta Gorda just after Hurricane Charley as the result of what appear to be hurricane-related injuries.  But Hirsh's hero, Paul "Fly" Moscone, thinks there's more to the story.  The book sounds like a fun read, but what I really enjoyed about the evening was having the chance to talk with the author about his experiences.  Hirsh's commentary on making the transition from his fact-bound world to the world of fiction was pretty amusing.  He shared a conversation that he had with his agent in which he was struggling to make the timeline of his story fit with the timeline of Charley.  "Michael," his agent said.  "This is fiction.  You can just make sh*t up."   What a concept!

Copperfish Books has a great line-up of authors slated to appear, with something for everyone.  You can check their website for info at http://www.copperfishbooks.com/.   Whether or not you can make it for a reading, stop by and check out the store.  I promise that you won't be disappointed.