Pops! Go the Holidays with the Charlotte Symphony Orchestra 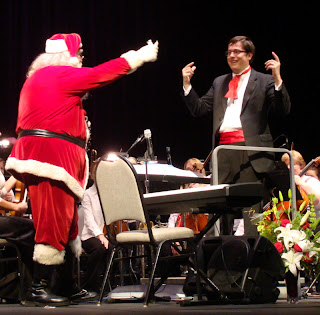 The Charlotte Symphony Orchestra got an early Christmas present last week-end in the form of guest conductor Matthew Wardell.  Wardell is the second of three conductors who are auditioning for the position of maestro and music director of the CSO.  If the performance of the CSO under his baton and the rapport that he created with the audience at the holiday pops concert are representative of what he would do as maestro, he is formidable competition for the other two candidates

I had the benefit of meeting Wardell the night before the concert at a "meet the maestro" event.  I was instantly engaged by his candor and youthful enthusiasm.  Although he's only 29 years old, he's been the conductor of the Ocala Symphony Orchestra for the past four years.  He admitted to a bit of nerves about conducting another orchestra, but said that he immediately felt comfortable with the CSO.  Wardell acknowledged this apprehension when he introduced himself to the audience, saying that his first rehearsal with the CSO was "like going on a date but you didn't get the chance to talk first."   From my vantage point it looked as if the date went exceedingly well, as the musicians smiled and laughed and played their hearts out throughout the evening.

The concert opened with Holiday Overture arranged by James M. Stephenson III.  The medley was a wonderful way to start as it gave the CSO the opportunity to play a variety of styles of music.  I always love it when the CSO gets the chance to swing, and it did so to perfection in this piece.  Wardell selected pieces with solos for a number of the CSO musicians, and concertmaster Janie Spangler got her chance to shine in the Overture.  As the music died down, Wardell gave the musicians two thumbs up on their performance. 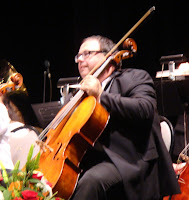 The stand out number of the concert was Stille Nacht arranged by Chip Davis/Mannheim Steamroller.  Wardell introduced this piece with  an explanation of what's involved in being the music director of an orchestra. Earlier in the week there had been an exchange of emails about requirements for the concert.   Wardell was asked if he needed a keyboard for Stille Nacht and responded that he was planning to use the harp to fill in where a keyboard is traditionally used.  It wasn't long before the phone rang with Maestro Wada on the other end of the line.  "Matt, did you know that Stille Nacht is one of my favorite songs?  Are you sure that you don't need a keyboard?  In fact, I thought that you might play."  Wardell was quick to pick up his cue, and he was front and center on the keyboard during the piece.  (I've never seen anyone play an instrument and conduct at the same time, but it worked out nicely.)   In addition to the keyboard, this version of Silent Night calls for an extended cello solo, and Lyle Lamboley did an incredible job.  I don't have the words to describe how beautiful his playing was. At the end of the piece, Wardell said, "Thank you, Lyle  It was a pleasure to play with you," and "bravos" resounded from the floor.

In order to compensate for the lacked of tiered seating in the Event Center, the CSO projects the performance on two big screens that flank the stage.  I always enjoy this feature of the pops concerts as it gives me a chance to get a close up of what is happening onstage.  The videographer did a great job showing the musicians' fingering on the wind instruments, and it was fun to get a better view of what happens in the percussion section.  The cameras also afforded the audience a chance to see Wardell from the same perspective as the musicians, and that was a real treat.  His style is certainly different from Maestro Wada's but they share a visible enjoyment of their craft.

Each piece of music in the concert was enjoyable in its own way.  I found myself tapping my toes to Sleigh Ride and listening raptly to Maestro Wada's narration of Twas the Night Before Christmas.   It was fun to be introduced to some new holiday music, including Alfred Reed's Russian Christmas Music that he composed in a mere six days.  I even sang along (much to my tablemates' dismay, I'm sure) to the Christmas Carol Sing-A-Long arranged by Gordon Munford.  I had a smile on my face from beginning to end of the evening, and I left the concert in a much more festive mood than I'd been in when I arrived.  If only that feeling could be bottled up and sold!   Thanks to Wardell and the Charlotte Symphony Orchestra for getting me in the holiday spirit in style.
at December 11, 2012