And when I say "a lot," I am not kidding.   Last Saturday at bike to breakfast, I heard about some people who had decorated every nook and cranny of their home with Christmas paraphernalia and opened their home to the public.  Since my personal holiday decorating consisted of putting some of my favorite ornaments (and hot chili pepper lights) on my faux palm tree, I thought it might be fun to see a house where people have gone to the other extreme.  My friend Wanda was visiting and on our way home from dinner I suggested a drive by on Rio Lisbo to see if we could figure out what house it was.  We had no problem identifying the house, in part because Santa and his 91-year old elf (Aunt Ruth) were sitting outside on lawn chairs inviting visitors in. 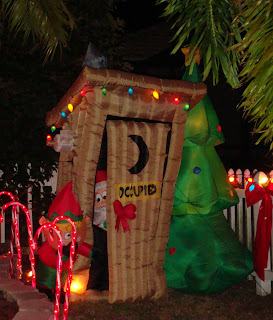 The front of the house is lit up with approximately a zillion lights.  We got to talking with Santa, and he shared that the cost of the wattage was what led him and Mrs. Claus to make their home a community event.  In previous years, people who came by to check out their house offered to throw in a couple of bucks towards their FP&L bill.  Santa and Mrs. Claus weren't interested in offsetting their costs, but when they realized that people were willing to make a donation to see their home, they decided to accept contributions of cash or items such as diapers and cleaning supplies for the Hope Children's Home in Tampa. (Check out http://www.hopechildrenshome.org/ for information about the work the Home does with "discarded, abused, unwanted and orphaned children".)  You've got to love it. 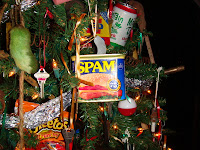 The real show started when we went around to the rear of the house.  Their backyard has several mechanical Christmas features, with my favorite being the hilarious Santa in an outhouse.  (Yes, he does eventually get the door all the way open.)   As we walked up the path, Mrs. Claus was waiting for us.  She welcomed us onto the lanai where the first of six full sized Christmas trees awaited us--the redneck Christmas tree.  The tree is festooned from top to bottom with cans of Spam and Mountain Dew, bags of Cheetos and other favorite snack foods, rabbits' feet, and all sorts of other surprises.  (Did I mention that Santa and Mrs. Claus moved here from Atlanta???)  As Mrs. Claus led us around their home, she told us about both the holiday decor and the fascinating antiques that they've collected.  On a ledge in the lanai is a still that was shot up by the Revenue Service that has been pieced back together.   Its proximity to the redneck Christmas tree cannot be a coincidence. 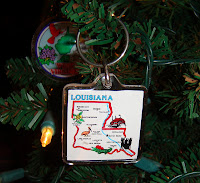 Each of the trees--large and small--has its own theme.  There's a Victorian tree and a snowman tree and a fishing lure tree and a Nascar tree.  There's a tree loaded with miniature kitchen utensils and a tree with ornaments from when Aunt Ruth the Elf was a child.  Mrs. Claus taught home economics, and there's a tree decorated entirely with pocket handkerchiefs that she sewed.  Some years Santa and Mrs. Claus have been on the road in their RV over Christmas, and they had a travel tree that they decorated with keychain mementos of their journeys.   It's no surprise that this tree made its way from the RV into their den.

You might be getting the impression that the only decorations in the home are Christmas trees.  Wrong!  Their master bath is filled with snowmen, and the bed in Aunt Ruth's room is decorated like a present that she unwraps each night before she goes to sleep.  On your way out the front door, there's a nativity scene made out of chalk figurines that was purchased long ago from Woolworth's.  It is truly a sight to be seen.

One of the most surprising things we heard during our tour was that Santa and Mrs. Claus have only been married since 2006, and that Santa previously lived in a home that was void of Christmas decorations.  I hadn't met Frank and Sue Anne (aka Santa and Mrs. Claus) before that evening so I have no idea what their back story is.   From where I stand, though, it looks like they were destined to be together.   Here's to a holiday filled with generosity and love.