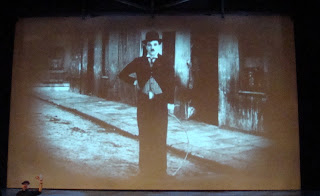 It struck me as somewhat ironic to see a play about Charlie Chaplin at a theater in the middle of New York's Times Square, which is anything but silent.  New York is at its busiest during the holiday season, and everywhere I looked there were street musicians and people dressed up as cartoon characters (some Disney connection that was lost on me) and other theatergoers rushing so as not to be late for their shows.  When we entered the calm of the theater, this image of Chaplin was projected on the curtain, and it immediately drew me in.  The opening scene was wonderful.  As the curtain rose and the screen version of Chaplin became smaller and smaller, the image melded into the onstage version of Chaplin atop a tight rope.   It was a promising beginning.

I always enjoy the incorporation of film into a theatrical production, so it's no surprise that the clips from Chaplin's movies were my favorite part of the show. The play covers virtually all of Chaplin's life, from when he was left at a workhouse as a child to his receipt of the Academy of Motion Picture's Honorary Award, and makes use of his films from start to finish.  We saw--both onstage and on-screen--the introduction of Charlie's iconic tramp in Mabel's Strange Predicament and learned that this persona was created in response to Mack Sennett's threat that Chaplin needed to be funny or he'd be out of a job.  We were shown the relationship between The Kid (which has been preserved in the Library of Congress' National Film Registry) and Charlie's own abandonment as a child when his mother was taken away to a mental hospital.  (Some of these scenes were a bit irritating as the child playing the young Chaplin wailed on and on.  Come on, kid--buck up!)  And we saw a clip from Chaplin's receipt of his Academy Award 20 some years after he'd left the United States.

The costumes and set for the show deserve mention as well.  In keeping with the theme, they were done in gradations of black and white except in the final scene when Charlie is on the red carpet.  (I have to admit that I didn't actually pay attention to this until Wendi mentioned it to me at intermission.)

The show had some great numbers.  I particularly liked "The Look-a-Like Contest," which was lots of fun and staged nicely with actors of varying heights.   Jenn Colella, who played gossip columnist Hedda Hopper, has an outstanding voice, and the songs featuring her were among my favorites.   There weren't, however, any numbers that stayed with me after I left the theater.  In fact, I felt in some ways that it was a show that would be a great regional production but that wasn't quite ready for the big time.  I might feel this way in part because the bio for Rob McClure, who played Chaplin, noted that he had originated the role at the La Jolla Playhouse in San Diego.  The La Jolla Playhouse has produced a number of shows that have ended up on Broadway, including "Jersey Boys," "Memphis," and--interestingly--"Peter and the Starcatcher."  A couple of years ago I saw the musical "Bonnie & Clyde" at the Asolo Repertory Theater.  The play was fresh off a run at the La Jolla Playhouse, and I lucked into the performance after which the audience gave feedback to, among others, the guy who wrote the "book" and the composer.  Needless to say, it was quite interesting to hear about the changes that had been made from the La Jolla production to the Asolo production, as well as the audience's thoughts on further improvements.  "Bonnie & Clyde" did make it to Broadway, but had only a four week run.   "Chaplin" has the same feel of a show that's good but won't generate the excitement required for a long Broadway run.  (I also have the benefit of knowing that the show is closing on January 6th, so I'm not going out on a limb by making this statement!)

While "Chaplin The Musical" won't make my theater hit parade, it was well done and interesting enough, and I actually learned a few things.  I had no idea that Chaplin was political and that he'd been banned from the U.S. as a communist nor did I know that he married Eugene O'Neill's daughter Oona.  Who knows?  Those questions might come up in a trivia contest one day and I'll now know the answers!  The show didn't, however, leave me with that magical feeling that moviegoers must have felt when they saw Chaplin on the big screen and that the producers of "Chaplin" must have been hoping for.   Still, it was a treat to see two plays over the course of four days, and a great way to end my New York get-away.
at December 07, 2012