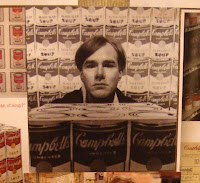 What do you think of when you hear the name "Andy Warhol"?   Most likely, it's a silkscreen painting of Marilyn or Campbell's soup cans.  But there's more to the art of Andy Warhol than these iconic images.  The Warhol exhibit that's on through January 5th at the Bonita Springs Center for the Arts, while small, is a great introduction to the world of Warhol's work and has some cool photos to boot. 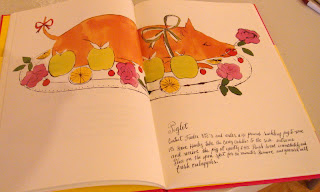 One of my favorite parts of the exhibit features Warhol's faux cookbook, "Wild Raspberries," that he self-published in 1959 with socialite Suzie Frankfurt.  Frankfurt had seen Warhol's whimsical paintings on display at Serendipity and sought him out to make his acquaintance.  They became buddies, and when Suzie suggested that they put together a cookbook for people who don't cook, Warhol was all for it.  A mere 34 copies of "Wild Raspberries" were put together, with Warhol doing the illustrations, Frankfurt creating the recipes, Mrs. Warhola (Andy's mom, whom he still lived with in a fourth floor walk-up) penning the recipes, and a variety of people coloring in the illustrations.  The recipe for Piglet reads, "Contact Trader Vic's and order a 40 pound suckling pig to serve 15.  Have Hanley take the Carey Cadillac to the side entrance to receive the pig at exactly 6:45.  Rush home immediately and place on the open spit for 50 minutes.  Remove and garnish with fresh crab apples."  Voila!  The cookbook was mass produced in the late '90s (which I'm sure Warhol would have endorsed wholeheartedly), and the exhibit has both a copy of the book to peruse and a couple of the original illustrations on display.  As an aside, some of these illustrations came up for auction a few years back and, for a nanosecond, I was one of the bidders.    At $17.50, the book is much more in my price range than the illustrations were. 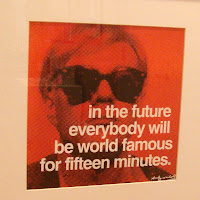 The exhibit has narratives along the way that cover the varied phases of Warhol's career, from Andy & His Dreams to Matinee Idols to Toy Paintings to the Silver Factory to Polaroids & Portraits.  The Factory was Andy's name for his  New York studio for over two decades, and he envisioned it as a "salon in which everyone had their fifteen minutes."  (Valerie Solanas, a radical feminist who was one of the Factory regulars, got her fifteen minutes when she shot Warhol because she thought that he was in cahoots with a publisher to steal her SCUM Manifesto.  "SCUM" is reported to have been an acronym for the Society for Cutting Up Men. )  Artists and musicians of all sorts hung out there, including Lou Reed, and  the people mentioned in Reed's "Walk on the Wild Side" were all part of the Factory scene.  Once Warhol began making his silkscreen paintings, his studio became a true factory where his works were mass produced in the same way that corporate America mass produces its wares. 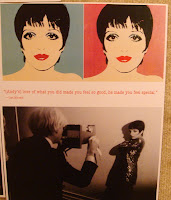 All in all, the exhibit was well worth the trip to Bonita Springs.  Not only is it great fun, but it also was a perfect prelude to my visit to New York next week where one of my stops will be the Met to see "Regarding Warhol:  Sixty Artists, Fifty Years."  The exhibit is a juxtaposition of 45 Warhol works with 100 works by 60 artists who were inspired by those works and promises to be quite interesting.   Watch this space for my report.