Long before "The Bachelor" became a prime time staple, TV audiences enjoyed watching "The Dating Game."  A young woman had the chance to ask three prospective dates probing questions to determine which one would be the lucky fellow who got to have dinner with her.  This analogy came to mind as I was thinking about this year's Charlotte Symphony Orchestra season with its three guest conductors vying for the position as the CSO's new maestro.  The analogy is more apt than you might think.   Katherine Caldwell, who has hosted pre-concert lectures for the past nine years, is using her forum this season to interview the guest conductor for that evening's performance.  Each candidate will answer the same questions, giving the audience an opportunity to learn more about him, his vision, and the approach that he would bring to the role of maestro of the CSO.   (The questions have been sent to the candidates in advance so they will have had the opportunity to consider their responses.)

Roderick MacDonald is the season's first guest conductor, so he was the first one on Katherine's hot seat.  "What attracted you to this position and why would you want to come here?"  "What would your short-term plan and long-term vision be for the CSO?  What strategies would you use to implement those plans and vision?" "How would you juggle the position as maestro of the CSO with your other responsibilities?"  And, of course, "What can you tell us about tonight's music?" 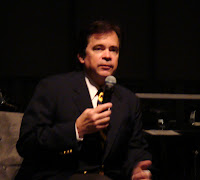 MacDonald had clearly given substantial thought to the questions that he'd be asked, and his responses were quite interesting.  His plan and vision for the CSO would be to continue to build its audience through the development of interesting programming.  His goal would be for the CSO to be recognized nationally both for its programming and as a model for orchestras in this size community.  His vision also includes educating the audience of tomorrow, and he would like to introduce the symphony to that audience by bringing performances (perhaps in the form of a chamber orchestra) into the schools.  MacDonald spoke a fair bit about the role of the maestro in fundraising, a reality in today's world.  He has some experience in this arena.  Each year since 2000, MacDonald has worked with the Leipziger Philharmoniker in Germany to raise funds for a local children's cancer clinic.  These concerts have raised more than $1MM to purchase equipment for the clinic and to provide financial support for the families of sick children, and MacDonald's passion for this project was apparent.

When talking about the evening's music, MacDonald was upfront about the fact that he chose pieces that he thought would both excite the audience and provide him with the opportunity to showcase his leadership as a conductor.  MacDonald is a musician himself--he serves now as Associate Professor of Trumpet at SUNY-Fredonia--and brings that perspective to his conducting.  When he puts down his trumpet and picks up his baton, he views the orchestra as his instrument.   He talked about the challenges of conducting Brahms' Concerto for Violin, Cello and Orchestra in A Minor, Op. 102 (also known as the Double Concerto), as he has to follow the soloists while leading the rest of the orchestra.  MacDonald promised that the evening's music would show off the CSO's musicians and "present their instruments on a platter." And with that, it was showtime!

Without doubt, the high point of the evening was the Brahms' Double Concerto featuring concertmaster Stewart Kitts on violin and Lyle Lamboley on cello.  The first notes uttered by Lamboley's cello were haunting and exciting with their foreshadowing of the music to come.  Kitts stood throughout the piece, which suited him well as he nearly levitates from his seat when he performs.  Both musicians gave top notch performances, and the audience couldn't resist the urge to clap at the end of the first movement despite admonitions to wait until the Concerto was complete.   Throughout the Concerto, the conversation between the violin and the cello was quite compelling, with the orchestra itself playing an important role in the dialogue.  Brahms is perhaps best known for his lullabies, but there was no way any audience member was sleeping through this performance, and at the end of the Concerto, the crowd rose for a standing ovation.

MacDonald's selection for the second half of the show was Rimsky-Korsakov's Scheherazade Op. 35.  This piece would have benefited from an introduction and an explanation of the narration between movements (given by CSO's incoming Executive Director Regina Buckley).  Scheherazade was the narrator of "One Thousand and One Nights" (known more informally as the "Arabian Nights"), a collection of stories she wove for her husband the king in order to forestall her execution.  The legends of Sinbad the Sailor, Ali Baba and the 40 Thieves, and Aladdin and his magic lamp all come from Scheherazade's tales, and each movement was a musical counterpart to one of these stories.  The Sea and Sinbad's Ship brought to mind images of crashing waves with periodic moments of sunshine and calm. The exotic Story of the Kalendar Prince yielded solos for a number of wind players.  The romantic Young Prince and Princess provided an opportunity for the harpist to perform.  And Festival at Baghdad.  The Sea.  The Ship Breaks Against a Cliff Surmounted by a Bronze Horseman once again showcased Stewart Kitts and his violin.  (As a side note, two of Kitts' daughters also played the violin in the concert.)  Despite some nice moments, the Opus felt a bit disjointed, and it would have been helpful if the narrator's stories introduced the relevant movement rather than closing the movement out.

As the applause was dying down and people were starting to rise from their seats, MacDonald and the CSO treated the audience to a surprise encore in the form of Brahms' Hungarian Dance No. 1.  It was an upbeat ending to the evening's performance by, as Maestro Wada always says, "OUR symphony orchestra."

Note:  This article was published in Florida Weekly.