Blown Away by the Barnes 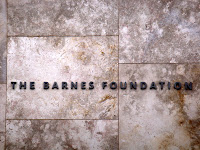 Visiting the Barnes Foundation is the equivalent for art lovers of being a kid in a candy shop.  When I stepped into the first room, my jaw literally dropped as my mind attempted to take in all of the masterworks before me.  There's Matisse's mural Dance of Life that was commissioned by Dr. Barnes for his collection.  There's Picasso's pre-Cubist painting Peasants that shows El Greco's influence on his early work.  There's Manet's The Card Players (a painting that some estimate is worth over $500MM) and Seurat's The Poseurs (models) with a portion of Sunday Afternoon on the Island of Grande Jatte in the background.   Much to my surprise, there was a painting by Glackens called The Bathing Hour, Chester, Nova Scotia.  (Althea actually noticed it first and remembered her kids swimming there when they came to visit.)  These are just a few of the 334 objects in the room.

I use the term "objects" rather than "works of art" because Dr. Barnes carefully crafted the way his paintings are displayed, surrounding them with metal works, furniture, and ceramics that mimic the lines or feeling of the paintings.  Each of the 20+ rooms contains several "ensembles" of works that have been faithfully replicated from the Barnes Foundation's prior home in Merion, Pennsylvania where Barnes organized his collection.  Rather than displaying works in the traditional manner of museums, Barnes saw his art in terms of light, line, color, and space, and these themes are played out throughout the Foundation.  With the help of the descriptions on the audio tape, Althea and I began to understand some of the connections among the objects. 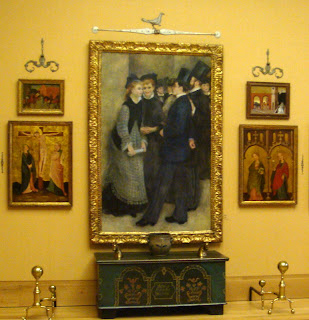 There were not any signs saying photography was not permitted but there also weren't any people taking pictures. I furtively took a couple of shots in order to share some of Dr. Barnes' collection and vision.  This picture shows a portion of an ensemble built around Renoir's Leaving the Conservatory.  (This is one of the 181 Renoirs in Barnes' collection!) Although Barnes primarily collected post-Impressionistic and early modern art, he also purchased African masks, Native American jewelry, and other works like these medieval religious paintings that don't immediately seem to fit in.  On closer inspection, though, you can see that the compositions of the paintings to each side of the Renoir mimic the composition of the subjects leaving the concert.  The three arches in the Pennsylvania Dutch chest are consistent with the composition as well, and the scrolls in the metal works cap the ensemble off nicely.

One of our favorite ensembles features Gauguin's Haere Pape as its centerpiece.  (You can take a peek at any of the works by going to the Foundation's website and scrolling through the works by artist.  Just go to http://www.barnesfoundation.org/collections/art-collection/artists-a-z/.)  Gaugin's painting features a half naked Tahitian woman on a beach of coral sand.  Each end of the ensemble features one of Renoir's fleshy nudes whose pink tones are on a continuum of the coral in the Gauguin painting.  Below each Renoir is an antique chair just waiting for the nude to take a load off and sit her lush behind down.  And above each Renoir is a scalloped metal work with lines that echo those of the nudes. 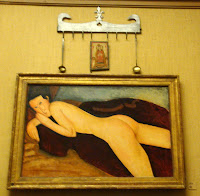 It is truly impossible to describe what an amazing--and exhausting--experience it is to be in the midst of such an incredible amount of masterpieces.  You could easily spend hours in each room enjoying the art and the nuances of the ensembles.  By the time we climbed the stairs to the second floor, our eyes had glazed over a bit, and we both would like to start the tour in the upstairs rooms on our next visit.   Among other things, the upstairs rooms had a number of works by Modigliani (one of my favorite artists), including Reclining Nude from the Back and Matisse's Joy of Life.

When you have a collection that is as important and valuable as that of the Barnes Foundation, there is bound to be some controversy.  Dr. Barnes grew up on the wrong side of the tracks in Philadelphia and never embraced the Main Line mentality despite the vast wealth that he amassed.  (Barnes invented Argyrol, an eye drop that all infants were given upon birth to ward off venereal disease.)  He envisioned his art as an educational tool for the every man instead of a collection to be housed in a museum where only the elite would view it.  His will specifically stated that none of the works were ever to be lent or sold; if you wanted to see them, you had to visit them within his established parameters.  If you're interested in the story of how the Barnes Foundation ended up in downtown Philadelphia (just a stone's throw from the Philadelphia Museum of Art that Barnes despised), check out "The Art of the Steal" on Netflix.  This enthralling documentary tells about the legal shenanigans that were involved in the move, as well as Barnes' anathema towards the Annenberg family (of publishing fame) that made me shake my head when I saw the Annenberg wing at the Foundation's new home.

A trip to the Barnes should be on every art lover's  bucket list.  Advance tickets are a must (as are comfortable shoes!)   Once you've made your pilgrimage, I am willing to bet that you, like me, will want to return time and time again.
at November 02, 2012