As I was heading to the airport last week for my flight to DC to visit some law school friends, I heard abut the prospect of a historic storm as a hurricane was on track to converge with a nor'easter near the Mid-Atlantic.  I paid the news no mind.  How many times have we suffered through coverage of storms that end up being no more than a blip on the radar screen?  And so I passed on the opportunity to change my return flight and head back to Florida early in order to avoid getting stranded in DC.  Besides my skepticism about the storm, we had lots of fun things planned, and I didn't want to miss them.

There's something incredibly special about being with friends who've known you since you were young.  You've celebrated happy times together and commiserated through the inevitable times of struggle that come with being an adult.  (You might notice that I didn't call them "old" friends--that's a term that's a bit touchy these days as we've all crossed that 50-year threshold.)  Althea (my hostess) chose Pearl Dive Oyster Bar as the lunch venue, and we had a wonderful time catching up and enjoying some New Orleans-inspired cuisine.  I'm sure that I "outed" myself as being less than cool by taking pictures, but these get-togethers happen too infrequently to not memorialize them.

On Saturday morning, Danita (my law school roommate) headed back to San Francisco, and Althea and I packed our bags and headed to Philly to visit the Barnes Foundation (which was incredibly amazing and will be the subject of another post).  From there it was a short drive on Sunday morning to Princeton to cheer for Althea's son Colin as he rowed for Columbia at the Princeton Chase, a three mile "head" race.

The Chase was my first regatta, and it was lots of fun.  There are two types of races--head, or long distance, races and sprints.  In head races, the boats have staggered starts--20 seconds apart in this case.  Massive exertion is required of the rowers but you don't get the excitement of pulling for your boat to cross the finish line first.  Colin rowed in Columbia's eight man freshman lightweight boat, and we positioned ourselves on a bridge where we got a great views of the boats with about one mile to go.  Colin's boat did very well--second in the lightweights (first was Princeton with the home river advantage) and sixth overall.  (The heavyweight and lightweight freshman boats competed at the same time, and there were 30+ boats in the race.)  The six hours of training that the team puts in every day paid off.  (Yes, that's right.  Six hours of training a day plus a college course load plus, in Colin's case, extra-curriculars like being on the Metropolitan Museum of Art's College Board.  It exhausts me just to think about his schedule!)   The weather held out for the freshman race but the event was called after that in order to get the students safely back to their respective colleges before the storm moved in. 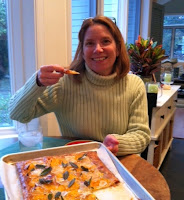 And so I found myself hunkered down with Althea, Pete, and Brian waiting out Hurricane Sandy.  We watched a lot of the Weather Channel and some bad TV (really--who watches those Housewife shows?), read, chatted, and played some competitive games of Boggle.  Althea being Althea treated us to home-cooked gourmet food along the way, including this gorgeous butternut squash tart with chili-infused honey and fried sage leaves.  (There were no left-overs.)

The devastation left in the wake of Hurricane Sandy is incomprehensible.  My heart goes out to the millions of people affected by what in fact did turn out to be a storm of epic proportions.  I feel incredibly fortunate not only to have been relatively unaffected by the storm but to have ridden it out with some of my dearest friends.  Once again I am reminded that life is short and that I need to make the most of every day.   I'm going to give it the old college try.
at October 31, 2012