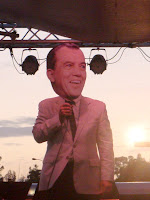 In my experience, most people are either Beatles fans or Stones fans.   I fall into the Stones camp, having spent many good times in high school rocking to the Some Girls album.  Having said that, I enjoy a good Beatles tune as much as the next person, so I was happy to hear that the Edison Pops Concert (an annual event that raises scholarship funds) was going to be a tribute to the Beatles.  It was only fitting since Edison State College is 50 years old and it's the 50th anniversary of the Beatles' debut on the Ed Sullivan Show.  (As you can see, Ed made a special appearance.) 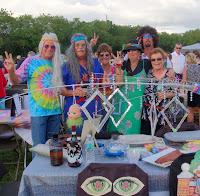 To add to the fun, participants were asked to decorate their tables for the event, and I was one of the judges tasked with selecting winners in the categories of Most Outrageous, Best Theme, and Judges' Choice.  Not having been to the event before, I had no idea what to expect.  The turn-out was great.  There were 48 tables of 10 (plus about 500 people sitting on the lawn).  While every table didn't participate, there were enough that did to make for some stiff competition.  My absolute favorite was the "Lucy in the Sky with Diamonds" table.  Let me tell you, these people went all out.  Not only did they decorate their tables to the nines and dress very mod but they played the song, had kaleidoscope glasses for passersby to don to get a psychedelic experience, waved laser lights during the concert, and offered the judges some Alice B. Toklas brownies.  (I didn't know who that was but got the drift of it, especially when one of the table members had a roach clip pinned to her hat!)  The brownies weren't necessary for the judges to agree that their table was definitely deserving of the prize for Most Outrageous. 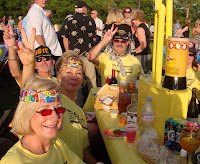 "Yellow Submarine" was hands down the most popular inspiration for table designs (including our own, which wasn't eligible to win due my lofty status for the evening).   The Punta Gorda Chamber of Commerce did a fantastic job with the theme and the team members all wore matching yellow submarine t-shirts, which was a nice touch.  The tower on the top of the sub revolved, and there were pictures of the Beatles looking out the portholes.  I noticed after the sun set that the interior of the tower actually lit up!  (I later learned that the Chamber goes all out every year and often walks away with one of the prizes, as it did this year for Best Theme.) 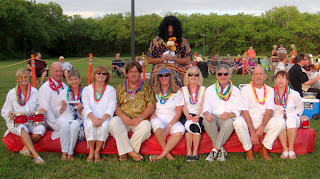 There were several tables in the race for the Judges' Choice Award.   The attire of the staff of the Charlotte Sun definitely deserves an honorable mention.    One staffer commented as I was taking this picture was that their HR department obviously needs to do a better job of screening its employees!   (By this time I would have given anything to have been wearing something other than jeans and a t-shirt.  I could have easily been bribed to vote for a table with an offer of a headband!)   The award went, though, to a group that replicated a picture taken when the Beatles went to India in 1968 to attend a transcendental meditation session at the Maharishi Mahesh Yogi's ashram.  Once again, I didn't initially understand the reference, but I loved the Yogi's get-up.    The other members of the group wore name tags identifying who they were supposed to be.  And the group helpfully had a picture from the original event to show the faithfulness of their imitation.   I was incredibly impressed with the creativity exhibited by all of the tables that went to the effort to decorate.  It really set the tone for a fun evening.

Enjoying the table decorations and costumes (and the picnic at our table!) was just a prelude to the main event--The Nowhere Band performing a selection of Beatles' songs. You probably won't be surprised to hear that you wouldn't mistake the Nowhere Band for the Beatles if you listened to them with your eyes closed.  Nor were the acoustics particularly good out in an open field.  Who cares?  It certainly didn't prevent the crowd from having a raucous time singing along to the music and vying for space on the dance floor.   It was a great choice for an outdoor concert on a perfect October evening.

I headed out a little early as the Nowhere Band was playing "When I'm Sixty-Four."  For many people in the crowd, the question "Will you still need me/will you still feed me/when I'm 64?" is no longer a rhetorical one.   To my eye, the answer seemed to be a resounding, "yes"!   It was a great ending to another great evening in Punta Gorda.
at October 15, 2012