Fighting for an Education

The story of 14 year old Malala Yousafzi's fight for the right to an education and the Taliban's fear of her message has captivated me.  For a young girl to have such vision, passion, and bravery is amazing.  And for the Taliban to react with an assassination attempt to silence her is incomprehensible.

The events have made me think once again about the power and importance of education in our society.  In my work at the Adult Learning Center, I see students every day who have come to their own realizations about the value of getting a high school degree, both from an economic perspective and for their own self-esteem.   These students--many of whom are in their 40s and older--are brave to come back to school.   Sure, there's no threat of gunmen coming into the classroom and shooting them for trying to achieve their goals, but it's not easy to acknowledge that the survival skills that you've developed just don't pass muster.

My primary job at the Adult Learning Center is that of volunteer tutor coordinator.  I train our volunteers to work with adult learners, match them, and monitor their progress.  It is an amazing feeling to watch a student-tutor match thrive.  Our fall edition of Charlotte's Literacy Web is hot off the press, and I thought I'd share an article I wrote about one of our matches.  If you're interested in learning more about what we're doing, you can click here for the full newsletter.  http://charlottetechcenter.com/tutors-newsletter/  (You might notice that the writing sounds a lot like this blog--lol!)   Hope you enjoy it. 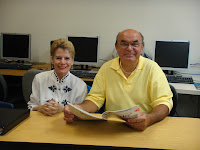 Sometimes a student-tutor match just seems meant to be.  Jane Pittinger is a long-time volunteer tutor with the Adult Learning Center and stopped in the learning lab one day last January to talk with Nanette Crist, our volunteer coordinator, about finding a new student to work with on his or her studies.  Tony was a relatively new student at the Center, and Nanette suggested that they sit together and go over Tony’s lessons.  The next thing we knew, they had decided to continue to work together; they have since logged in almost 100 hours in tutoring time!

Tony was born in Italy and came to the United States back in the 1960s  at the age of five.  At that time, schools didn’t have programs for children whose native language wasn’t English, and Tony fell through the cracks.   Because Tony’s family spoke Italian at home, it took him several years to become fluent in English.  By that time, he was so far behind the other students that he had become very discouraged.  He felt school was “like a wall that he couldn’t get over, under or around.”  Tony dropped out of school after eighth grade to start working to help support his family.  He worked in delis and did yard work and learned real life skills.  As an adult he has primarily worked in warehouses, helping businesses maintain their inventories.

At the end of last year, Tony was laid off from his job.  A friend told him about the Center and, with the encouragement of his niece, he came to check us out.  He says he feels like “a door opened up” for him, and Jane was there to meet him on the other side.

Jane has been tutoring with the Center since 2009. Her work as a tutor began well before that, though.  Jane lived in Mexico for four years in the late 1980s where she helped business executives develop their English skills at the Centro de Idiomas del Sureste in Merida, Yucatan, Mexico.  (Interestingly, the Centro is owned and operated by Jane’s family.  Tutoring skills are apparently in her blood!)  Upon returning to the States, she tutored both ESOL and non-ESOL students at Frederick Community College in Maryland.  When Jane moved to Florida, she was looking for some volunteer work and called “211” for information.  They put her in contact with RSVP (Retired Senior Volunteer Program), which in turn put her in touch with the Center’s program at the Family Service Center.  Over time, Jane has tutored approximately ten of our students.

Tony and Jane get together twice a week and generally work for two hours.  Tony’s goal is to be able to represent himself to others the way he thinks of himself.  He wants to be able to confidently fill out job applications and speak with prospective employers.  Tony is enjoying his studies at the Center and working with Jane.  He says that the teachers are very supportive and find great resources for him to use.  Jane says that Tony is an eager learner who takes his studies seriously.  Like most adult students, he is filled with common sense, logic, and real life knowledge.  Tony is a walking advertisement for our program.  He encourages people he meets who are in similar situations to his own to come and learn, telling them that embarrassment shouldn’t hold them back.

Thanks to Tony and Jane for sharing their stories and partnership with us.  The progress that Tony has made through his hard work in the lab and his work with Jane and the dedication that Jane has shown to her students are inspirations to us all.

Email ThisBlogThis!Share to TwitterShare to FacebookShare to Pinterest
Labels: Literacy