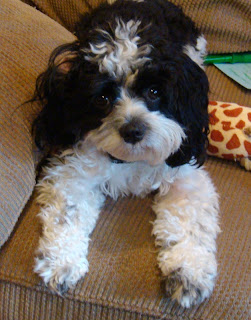 I am in withdrawal.  After two weeks of almost daily yoga classes, I headed over to the East Coast to take care of Drew (my sister's ten year old) and Jakie (the just-turned one year old dog) while the rest of the family went to New York to visit TJ at NYU and to take Elizabeth on some college visits.  The closest I've gotten to yoga in the past couple of days is watching Jakie do upward and downward dogs.  (That always cracks me up.)   I could, of course, do my own practice here, but I tried one downward dog pose and Jakie started licking my leg.  So I'll get back to my new routine next week.

In the meantime, I'm catching up on a lot of paperwork and working around Jakie's schedule.  (If you're getting the sense that I'm here to watch the dog rather than the boy, you've got that right!)  I am learning that dogs have body clocks the same way people do.  Jakie is up and at 'em in the morning, lazes throughout the day, and wilds at night.   I've proposed to Jakie that we go on morning walks, but he is having none of that.  Even though he's only about 12 pounds, when he digs in, that's it.  Instead, like many babies, he wants to go on a car ride.  So one morning I bundled him into the car and went for a short ride to a park.  He sat on my lap while I drove and looked with curiosity at the other dogs out walking with their owners.  (I say "other dogs" but I don't think he recognizes any resemblance to those creatures.)  Things were getting off to a good start at the park but a woman walking with her dog and child suddenly appeared and the dog (a very fluffy white poodle) gave Jakie a friendly bark.  Have I mentioned that Jakie is a scaredy dog?   He hightailed it straight back to the car and I had to carry him in the other direction until we were well out of sight of any other living creature before putting him down.  And though he likes to play in the morning, he wants nothing to do with wet grass (or pavement, for that matter).  One morning he seemed interested in walking on the street until he realized that  it had rained the night before and his little legs are so short that his belly was getting a bit damp.  That was the end of that.   I haven't resorted to putting him in the doggie stroller and going on a constitutional, but if I were going to be here much longer, that would definitely be in my future. 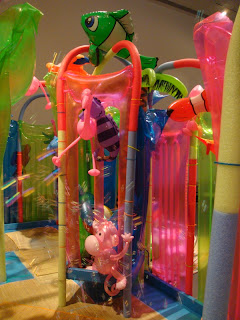 I did manage to go on one outing during my stay to the Boca Raton Museum of Art.  (Trust me when I say that it was incredibly hard to close the door on his sad little face.  I have now figured out that the way to get out the door easily is to use the diversionary tactic of putting human food out for him.  He is truly a Crist.)   Anyway, the Boca Museum had an exhibit on called Big Art::  Miniature Golf that I was interested in seeing/experiencing.  It was a very unusual exhibit, and while I didn't love it, it was definitely creative.  The hole pictured here is called "Trapped in Paradise" and as you enter the hole, a bubble machine is triggered and bubbles waft around you as you putt out. "Chasm" is a play on Catholicism.  There are 352 golf balls hanging from twine on either side of the hole and the goal is to stay on the straight and narrow and hit the ball into a chalice.  The center aisle is intended to represent the nave of a cathedral.  (Surprisingly, I didn't do so well on this one.)   My favorite hole, though, is called "The Life Hole."    You start the hole at birth and play until you reach your death.  Along the way there are sand traps with streaming video graphics with expressions like "your putt is in your hands", "par excellence", and "have fun on the journey."  The graphics in the final trap alternate between "your hole awaits" and a picture of a cemetery. As I said, the exhibit might not be your cup of tea, but it is definitely creative. 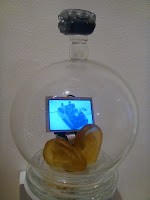 The Museum also has a show on display entitled "Contemporary Glass Movement Turns 50."  As long as I was there, I decided to stroll through the exhibit, expecting to see lots of pretty glass bowls and the like.  Instead, it was a really interesting exhibit with works ranging from Tim Tate's multimedia glass work entitled "Falling on Deaf Ears"  to Danny Perkins' Abstract Expressionist-inspired takes on Mount Hood and a city Skyline to Dale Chihuly glass mobiles.  (There were also some pretty bowls.)

After cruising through the glass exhibit I headed out to the sculpture garden, which was my favorite stop of the day.  I had to laugh when I saw "Tete au Carre [Square Head]."  It made me think of Lucy saying, "You're such a blockhead, Charlie Brown."  I'm not sure that that's what French sculptor Sasha Sosno was going for, but it made me laugh, and there's nothing wrong with that.  The sculpture I liked best was a lovely bronze entitled "Woman Walking" by Lynn Chadwick.  It was made to scale and, while somewhat abstract, captured a female figure walking purposefully towards her destination.  The sculpture reminded me, though, that I'd been away from home a while and it was probably time to head back and try and get Jakie out for a walk.

When I watched the kids last year when Suzanne and Tim took TJ to college, I came away exhausted and with a much greater appreciation of the schedule of a stay-at-home-mom.  This year I'm coming away with an appreciation of what a commitment it is to have a pet.  There are incredibly wonderful moments, and you  feel very loved, but it is definitely a lifestyle decision.  I'm sure that if Jakie were my dog, I'd get used to leaving him while I went about my life.  As a petsitter, though, it makes me feel too guilty so I'm just enjoying our time together.  Tomorrow's time enough to get back to my real life.