September has always been one of my favorite months.  I think it must relate to the whole back-to-school cycle.  Summer is over (even if it doesn't exactly feel like it); I've had some time to rejuvenate; and it's a perfect time to take a step back and set some new goals.   Enter the Yoga Sanctuary.  Last year I heard about the Yoga Sanctuary's challenge to take 20 classes during the month of September as a way to celebrate National Yoga Month.  The idea was intriguing to me, but I just couldn't quite figure out a way to fit it into my schedule.  This year I took the plunge, and I'm already glad that I did.

This year's challenge started a bit early with the Yoga Sanctuary's monthly community class on August 30th.  Bonnie Yonker, who owns the studio, has a true commitment to our community.  Each month, there's a donation only class that benefits a local non-profit.   Bonnie has taken this idea a step further, though, for National Yoga Month, with all proceeds from the challenge going to support the Peace River Wildlife Center.  Participants are encouraged to solicit pledges from their friends and families to raise money for the cause.  Instead of a walk-a-thon, it's a yoga-thon.  This is the third year that the Yoga Sanctuary has combined its yoga challenge with its support for the Center, with more than $5,000 having been raised for the Center's coffers in the last two years. 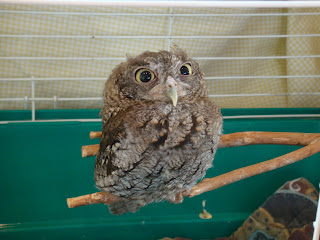 Dr. Robin Jenkins, a veterinarian who volunteers with PRWC, told us a bit about the Center before the class started.   The mission of the Center is to "treat and rehabilitate injured and orphaned native Florida wildlife...and, if possible, to return them to the wild".   The Center admits approximately 2,000 injured birds and other animals annually and is home to 200+ residents.  The Center relies on private donations--and the occasional grant--to fund its operations.  The cost of feeding the permanent residents alone is nearly $75,000 per year, so that's a lot of fundraising.   Dr. Jenkins knows that the best way to pull on people's heart strings--and get them to open their wallets--is to show them what they are supporting, so she brought along one of the Center's most recent admissions--a small screech owl.  He is unbelievably cute and fluffy.  When the little guy was brought to the Center, he was in a coma.  It's likely that he injured himself by flying into a car or building while diving for food.   Although he's now awake and has started flying around in his cage, he is very docile, and he probably won't ever be strong enough to be re-released into the wilds of Punta Gorda.  (In fact, he didn't make a peep during the entire class.)  Dr. Jenkins' pitch was successful, with over $600 in contributions being made that night.  An anonymous donor generously agreed to match the donations made at the kick-off class, so the Center now has an additional $1200 to support its operations.

My goal, of course, is to try and fit 20 classes into the month despite a couple of week-ends away and a fairly busy work schedule.  Today I took my fifth yoga class in as many days.  This once-a-week yogi is already enjoying having a more consistent yoga practice.   And I challenged myself further by going back to an ashtanga class after more than a year's absence.   Trust me when I say that I'm becoming reacquainted with some muscles that have been dormant too long.   More importantly, though, I love the way I feel when I practice.  The minute I sit down on my mat, I feel more centered and detached from the noise in my day-to-day life.  The trick, of course, is figuring out how to transfer that feeling to outside the studio.  Thanks to Bonnie and the Yoga Sanctuary for giving me the push I needed to explore the benefits of yoga more fully.  I'll report back as the month progresses.   Namaste.
at September 03, 2012