After driving around Rochester and gawking at all of the gorgeous mansions, it shouldn't have come as a surprise that Rochester has a great art museum.   Sure, the Memorial Art Gallery (MAG) doesn't rival the Met in square footage, but it has incredible scope for a museum of its size.   The artists whose paintings are on display run the gamut.  There's Monet and Degas and Renoir and Cezanne.   There's Whistler and Matisse and Milton Avery and Winslow Homer.  There's a funky two-sided painting by Georgia O'Keefe, Jawbone and Fungus, that hangs in a space where viewers can see both paintings.  There's Claes Oldenburg's Baked Potato with Butter (baked potatoes apparently being one of Oldenburg's "go to" objects for both sculptures and prints) and Stuart Davis' Garage with Gas Lights.

The MAG also has a great sculpture collection (and an outdoor sculpture garden in the works).  There are a couple of rooms devoted to Oceanic, African, and Native American art that had some masks from Papua New Guinea that I was drooling over.  You can see a bronco buster by Frederick Remington, a dancer by Degas, and a bronze of Harriet Tubman (with faces of slaves on her skirt) by Alison Saar.  My favorite sculptures, though, were the pieces that can double as furniture that were made by Wendell Castle.  Castle's works are interspersed throughout the MAG, and one of my favorites was his Last Judgment (and not only because it was a great photo opp).   You can't see it in this photo but there's a door in the sculpture that opens to provide some handy storage space (pun intended).

When we decided to visit the MAG, Maggie said there was one piece I would get a big kick out of.  I entered each room with great curiosity, but also with a bit of apprehension that I wouldn't see the connection when we got to the big reveal.  We eventually came to a room where there was a sculpture (for lack of a better word) made of spools of thread.  We picked up an acrylic viewing sphere and when we looked through it, the work became Grant Wood's American Gothic.  It was quite crazy and very reminiscent of Salvador Dali's Mediterranean Sea Which at Twenty Meters becomes a Painting of Abraham Lincoln that Maggie and I saw at the Dali Museum in St. Pete.  Whew!  I got it!  Sparber's upside-down spool sculptures explore the connection between art, technology, and human biology, with each spool of thread intended to be a pixel.  The concept is similar to pointillism as well, with the image forming as you back away from the painting.   Either way, it was very cool, and an unusual use of 4392 spools of thread!   (If you're interested in learning a bit more about Sparber's art, go to http://www.designboom.com/weblog/cat/10/view/18131/devorah-sperber-american-gothic-thread-works.html). 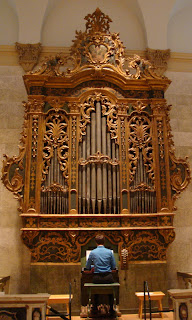 Our visit was capped off with a concert on the only full-size antique Baroque Italian organ in North America.  The organ was built in 1770,  is 22' tall and three feet deep, and has 600 pipes.  It is truly a piece of art, and was about to be sold to be used as furniture in some Italian's modest palazzo when it was rescued by Gerald Woehl, a German organ builder and instrument restorer.  The organ is now owned by the Eastman School of Music, which has lent the organ to the MAG.  Each Sunday afternoon an Eastman student plays a short concert.  If you're interested in hearing what the organ sounds like, check out this link.  http://www.youtube.com/watch?v=e5htqfVFFiE   We were also treated to a peek into the bellows room to see where the power comes from that fuels the music.  If school were in session, a second Eastman student would have been working the bellows during the concert (which consists of stepping on a large lever that inflates the bellows, expelling air that then feeds into the pipes).  For our concert, an electric fan did the work.

What started out as a quick trip to the MAG to break up a rainy afternoon turned into a really fun outing.  That's the way it often goes if you let yourself be open to opportunities--and the lead of an expert tour guide!  It makes me all the more eager to continue my explorations of Southwest Florida so that I'll have fresh and fun things to share with my visitors.
at August 08, 2012