Harriet Tubman: The Moses of Her People 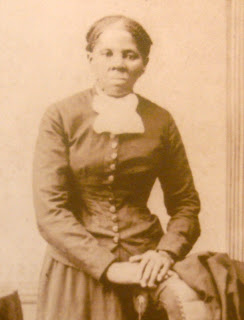 I'm visiting my friend and bridge partner Maggie in Rochester (where it will be 95 degrees today--so much for getting away to a cooler climate), and we spent a day in nearby Auburn, New York on the way to play  in a bridge tournament.  What, you might ask, is in Auburn, New York?  As it turns out, quite a bit!  Our first stop was the Harriet Tubman House.  I knew Tubman's name as a former slave who worked in the abolitionist movement.  I did not, however, know much about her life.  We came away in awe of the bravery, strength, and selflessness of this woman.

Harriet was one of nine children born into slavery on the Eastern Maryland shore.  When Harriet was a small child, the family was separated as Harriet, her mother and some of the other children were sold to one plantation owner while her father and older brothers were sold to another.   Harriet was able to see her father periodically, however, and he taught her about the Maryland landscape and waterways and how to navigate using the stars.  These skills would prove crucial when she later made her escape to freedom. 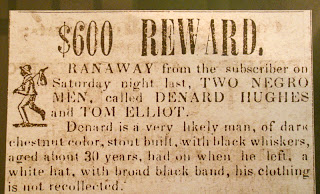 When Harriet's owner died, she realized that it was only a matter of time before the widow would sell the members of her family to different households, and that it was time for her--and her family--to try to escape.  Harriet was the first to make her getaway, slipping away from her work in an abolitionist's wagon along the Freedom Trail.  (During the Civil War, the Freedom Trail became known as the Underground Railroad.)  When Harriet crossed the Maryland border, she reportedly said, "...I looked at my hands to see if I was the same person.  There was such a glory over everything.  The sun came like gold through the trees and over the fields, and I felt like I was in Heaven."   Harriet found herself in Philadelphia, and as soon as she was settled, she went back to Maryland to bring some members of her family and other slaves to freedom.  She helped her niece and her children flee from the auction block after an abolitionist posed as their purchaser.  (The slave owner did not get paid.)   Harriet's endeavors were at no small risk, as the Fugitive Slave Act required the return of slaves to their owners.  Often, slave owners sweetened the pot with the offer a reward.  Eventually, Tubman made 13 trips to help other slaves find their way to freedom, guiding many of the slaves all the way to St. Catherines, Canada, where the Fugitive Slave Act had no force.   (Auburn, New York, was a progressive bi-racial community that was one of the stops on the way to Canada, and this is where Harriet settled with her family.)

This was not the end of Harriet's service to others and her country, though.  During the Civil War, she served as a cook, a nurse, a spy, and a scout.  Sadly, her efforts were not always recognized or appreciated.  At the end of the War, Harriet found herself in the South and booked a train passage back home.  The conductor tried to force Harriet into a smoking compartment (which was apparently the more appropriate place for African Americans.)  Harriet resisted, explaining her service to the government.   Ultimately, the conductor and two other white passengers physically removed her from her seat and threw her into the smoking car, breaking one of her arms in the process.   (Some would say she was lucky just to end up with a broken arm, as a mob mentality broke out, with many of the passengers yelling at the conductor to just throw her off the train.)

In 1869, Sarah Bradford wrote an authorized biography of Harriet's life entitled Harriet:  The Moses of Her People.  The sale of the book raised $1200 for Harriet, which she used to purchase a large piece of property in Auburn from William Henry Seward (who you'll hear more about in another post).  Harriet lived on the property with her family and built a Home for the Aged.  She used this home as her base as she later traveled the lecture circuit in support of the suffragist movement.  Harriet continued her work for the rights of all people until she died at the age of 91.   She was truly an extraordinary woman.
at August 04, 2012